Researchers have a cheap, easy way for cleaning up oil spills: letting plants do the work. Why isn’t it used more often? 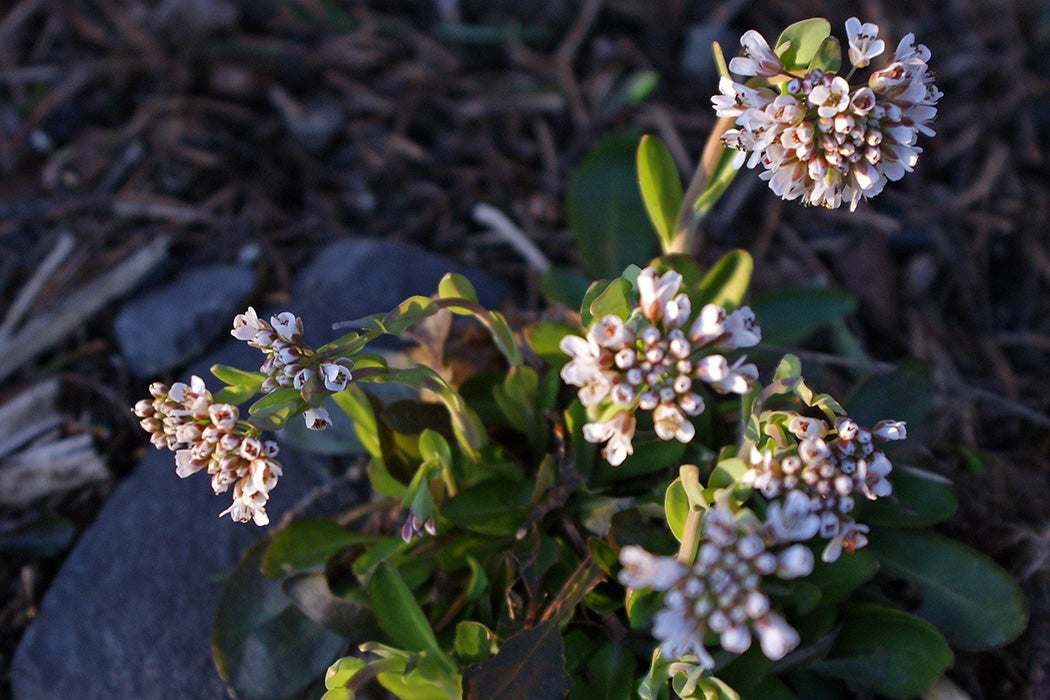 Imagine a field contaminated by an oil spill. The toxins have reached deposits of water, and fumes have overtaken the air. Unfortunately, situations like these are common all over the world, presenting hazards to both the environment and to human health. Cleaning up such toxic sites can be very expensive and dangerous, but, in the last three decades, researchers have been working on a new technique: letting plants do the work for us.

Bioremediation, the microbiologist Carol Litchfield wrote in BioScience, is “any use of living organisms to degrade wastes.” Phytoremediation, the use of plants for these purposes, is a part of the larger field of bioremediation. In a sense, people have been using the technique through all of human history, but bioremediation first became a field of scientific study in the 1970s. At first, researchers focused more on microorganisms, either adding nutrients to facilitate the growth of microorganisms at the contaminated site or transporting the contaminated soil or water to bioreactors, where decontamination occurred.

It wasn’t until the 1980s that plants were included in the roster of organisms used in bioremediation, mainly to restore fields contaminated with agrochemicals. Soon after, researchers started to explore a wider range of compounds that could be cleaned from the environment, including petroleum derivatives, heavy metals, TNT, and volatile compounds from paints and refrigerants.

Most plants cannot grow on contaminated soil or water and, even if they can, most will simply avoid absorbing toxins, leaving them in the soil.

Finding the right plant to use for this purpose is not easy. Most plants cannot grow on contaminated soil or water and, even if they can, most will simply avoid absorbing toxins, leaving them in the soil. Crops used in agriculture also are not ideal, since they have been selected for yield, not remediation. But when the right plant is found, it can pay off.

A good example of this was the case of Cabin Creek, in West Virginia. Two sites of the former Pure Oil Refinery held several storage tanks that contaminated both soil and groundwater. The refinery discontinued its operations in 1954, but more than 40 years later, in 1996, researchers still found high levels of petroleum compounds in samples of soil and water from the sites. Due to the high variety of chemical compounds that make up petroleum, situations like this can be a challenge to traditional remediation techniques. Moreover, the sites posed risks of flooding and vandalism, which made the operation and maintenance of a full-scale mechanical remediation system risky. The West Virginia Department of Environmental Protection thus approved the state’s first phytoremediation project.

When the phytoremediation project started, in the spring of 1999, the tanks and facilities had already been cleared. So, all the researchers had to do before starting to plant the trees was to clear brush and debris. The plant chosen for the task was a hybrid poplar tree species (Populus deltoids X Populus nigra), which had already proven its capacity to degrade organic toxins in controlled tests. More than 15,000 poplar trees were planted that year at the sites, covering 54,000 square meters (14 acres). By September 1999, the researchers noticed that the leaves of many trees were deformed or shed earlier than expected. About 5,000 of the trees eventually died. But it wasn’t the contaminants that killed them; it was lack of water. In March 2000, the researchers replaced the dead poplar trees and installed water taps to avoid future issues with irrigation.

Once the poplars were viable, researchers collected samples of soil and groundwater periodically to measure levels of petroleum derivative compounds, such as gasoline, toluene, and benzene. By 2006, seven years after starting the experiment, levels of gasoline had dropped by 82% in the soil and 59% in groundwater. Levels of toluene dropped 90% and 84% in soil and water, respectively, showing that the poplar trees were successful in cleaning both land and water. The experiment was also very cheap, costing roughly $80,000 for installation and another $20,000 for yearly maintenance. For comparison, other means of remediation, such as incineration and soil venting, would have required the installation of heavy machinery, the excavation of the soil, and would have a high energy demand, estimated to cost at least $65 million in total.

Things don’t always go so smoothly. Sometimes plants can’t degrade the toxins, such as in the case of heavy metals. It is, however, possible to cultivate species known as hyperaccumulators that store these metals in their bodies and to, later, harvest the hyperaccumulators, thereby removing the heavy metals from the contaminated site.

Scientists think that hyperaccumulators evolved this ability as a way to defend themselves from herbivores. In one experiment, alpine pennycress (Thlaspi caerulescens) was cultivated at eight different sites in France, Belgium, and Luxemburg. Each site had different levels of zinc in the soil; consequently, the plants grew with different levels of zinc in their bodies. The plants with a higher concentration of zinc suffered less damage by herbivores overall and fewer snails were captured on them. Moreover, these high-zinc plants, which usually produce chemicals to protect themselves from herbivores, produced fewer of these chemicals. Thus, the accumulated zinc acted as an alternative defense mechanism, sparing the plant from spending energy on other defensive measures.

Phytoremediation of heavy metals offers an advantage over other methods of remediation: the metals captured and stored by the hyperaccumulator plants can be recovered and used commercially, a practice known as phytomining. But there are risks involved: these plants can cause intoxication if eaten by humans or other animals and can also spread the toxins by shedding leaves.

Phytoremediation is not used exclusively to clean toxic land sites; it can also be used to clean bodies of water. An experiment in Canada applied phytoremediation to restore lakes from eutrophication, a phenomenon whereby excessive nutrients, usually derived from human activities, cause microscopic algae to reproduce too much, which can be damaging to other aquatic lifeforms. In one experiment, researchers constructed artificial floating islands and planted cattails (Typha spp.) on them. The roots of these plants grew through the islands and into the water, where they could absorb nutrients, such as phosphorus and nitrogen. The use of the floating islands had other benefits beyond phytoremediation: they also serve as habitat for fish and protect the shoreline from erosion.

The floating island method was tested in two experimental lakes in Ontario, Canada, one of which had water enriched with phosphorus. Comparing plants from both lakes, researchers found that plants from the phosphorus-rich lake grew faster and absorbed more phosphorus. They also noticed that a layer of algae and bacteria growing over the roots and surface of the island and contributed to the remediation process. The experiments made clear that this system can be used to restore lakes from eutrophication.

Later, the researchers applied the data they obtained to a model of Pelican Lake, in the region of Manitoba, and estimated that by covering 5% of the area of the lake with floating islands, it would be possible to reduce the phosphorus level by half. Due to the size of the lake, it would be difficult to restore the lake only with phytoremediation, but the floating island technique could be used in combination with traditional remediation to achieve a healthy environment more easily.

Thanks to their ability to absorb volatile toxins, plants have always been associated with clean air. Chemicals such as trichloroethylene (TCE), the most common environmental pollutant in the U.S.; benzene, a pollutant associated with petroleum; and chloroform, a byproduct of water treatment, are among those that can be absorbed by plants, as shown in research from the University of Washington. These toxins not only cause significant harm to the environment, they are very dangerous to human health, causing cancer and hepatic and neurological diseases.

The researchers went further. They genetically engineered the trees so that they would degrade the toxins faster and in higher quantities. To make this possible, they inserted the gene from an enzyme called P450 cytochrome in the plants. This enzyme is typically found in the livers of mammals and is responsible for breaking up several toxins to protect the organism. The researchers believed that, by forcing the trees to produce a high quantity of these enzymes, they would be more efficient in degrading the toxins—and they were right. Transgenic poplar trees could remove up to 30 times more TCE from water and 3.5 times more benzene from air.

Transgenic plants also can be used to detect contaminants. In one study, a team of researchers created a transgenic tobacco plant that turns white when it detects TNT, an explosive and pollutant, in the air or soil. To trigger this reaction, researchers used the whitening mechanism from the plant itself and inserted genes from bacteria to create a switch-like mechanism activated by contact with TNT. The resulting plant turns white in a few hours with the smallest contact with TNT. By manipulating the bacterial genes, it was possible to create plants that react to various other pollutants as well.

Unfortunately, after more than 30 years of research, phytoremediation is still largely ignored in commercial usage. An article from the Proceedings of the National Academy of Sciences explains some of the reasons for that: phytoremediation takes a lot of time. It may take years to completely clean a brownfield. Even if phytoremediation is cheaper and more environmentally sustainable, developers may prefer quicker methods like excavation. A lack of understanding about and trust in the technique—both among consumers and remediation practitioners—is another barrier to widespread adoption of the practice.

Even in its simplest form, phytoremediation possesses a lot of advantages compared with other methods of remediation. Plants are solar-powered and generate little to no secondary air or water pollution. In the case of heavy metals, plants allow for the recuperation of valuable products. As we learn more about toxin-absorbing plants, there is hope that phytoremediation will become a more valuable and frequently-used tool in the fight against pollution.

Share Tweet Email Print
Have a correction or comment about this article?
Please contact us.
environmentalismpollutionBioScienceEnvironmental Health PerspectivesFloating Treatment Wetlands and Plant Bioremediation: Nutrient treatment in eutrophic freshwater lakesOecologiaProceedings of the National Academy of Sciences of the United States of AmericaWater Environment Research