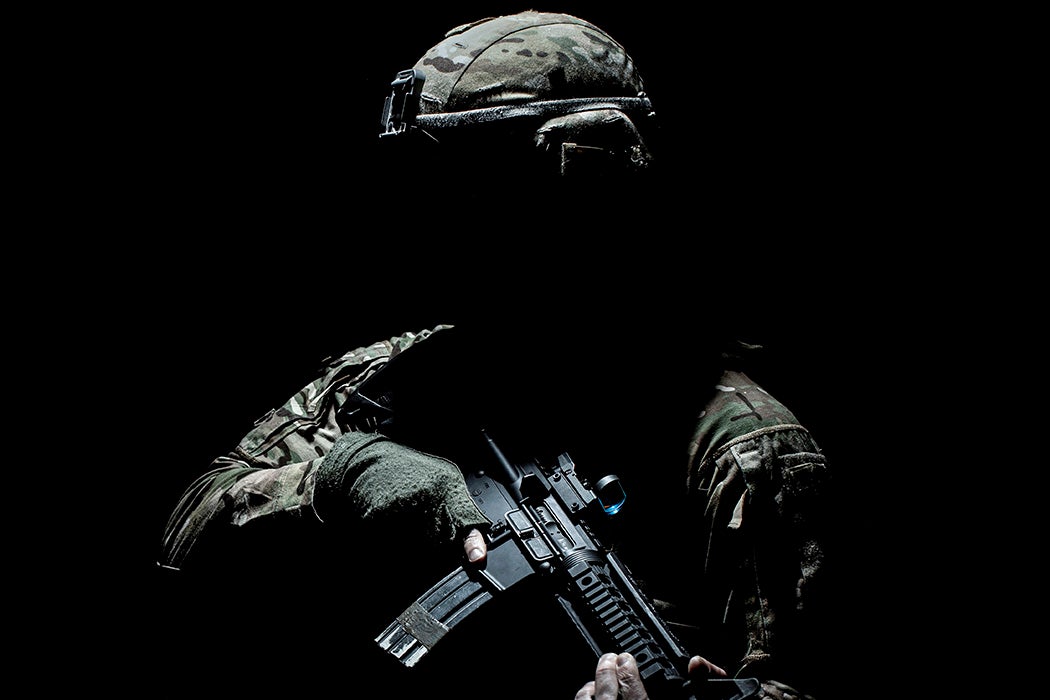 If humanity has always had wars, it seems natural to assume soldiers have always suffered from PTSD. But PTSD as a recognized diagnosis is relatively new. In fact, PTSD was not added to the Diagnostic and Statistical Manual (DSM) until 1980.

Since the close of the Vietnam war, journal articles began to question the link between the mental health consequences of having served in Vietnam, crime, and incarceration rates. But those articles didn’t yet have the PTSD diagnosis in their analytic arsenal—it simply didn’t exist. Now that it does, contemporary articles retroactively apply what we now know as PTSD to centuries-old accounts of veterans suffering mental health issues. To understand the modern discourse around PTSD and incarceration, it is imperative to understand its evolution through history.

From the bible to Greco-Roman classics, tales of soldiers suffering nightmares of battle abound. The etiological conception of wounds on the psyche shifted through the eras, bouncing between physical and emotional causes. Nostalgia. Soldier’s heart. War neurosis. Shell shock. Battle fatigue. There may not have been agreement over its cause or the precise collection of symptoms, but there was a recognition that severe trauma left an indelible mark on the psyches of some exposed people. During both world wars, newspapers ran stories about afflicted soldiers and full military psychiatric hospitals.

Yet the multifarious symptoms were not combined into a cohesive disorder. One thing that may have contributed to the delayed diagnosis was the male ethos of stoically enduring pain, which likely prompted hundreds of thousands of combat veterans through America’s history to suffer in silence even as medical advancements skyrocketed in the 20th century. “When we got out, you couldn’t talk about things like that… You held it all in. I didn’t want to take it to my family,” World War Two veteran Otis Mackey told the Washington Post, decades after the war. “If you’d say anything, people wouldn’t believe half of what you say, anyway.”

That said, battle trauma is just the most commonly discussed type of trauma. While what is probably the most commonly occurring form of war trauma, sexual assault, is rarely mentioned. For centuries, too many stories of how women (and some men) responded to rape trauma went untold while soldiers’ accounts of struggling with disturbing memories of battle are documented frequently.

Pioneering European researchers made great strides towards the recognition of a cohesive disorder in their work treating Holocaust survivors, identifying concentration camp syndrome.

When the first DSM was published in 1952, it contained a temporary psychiatric disorder called “gross stress reaction.” By the time the second DSM was published in 1968, shortly after the US entered the Vietnam war, even that had been removed. Whether the Veterans Administration wanted to reduce their financial liability to Vietnam veterans or it was truly regarded as a nonspecific and/or nonclinical diagnosis is unclear. For the duration of the Vietnam War, not a single diagnosis relating to stress exposure was ever accepted in the DSM.

In the early years of the Vietnam War, VA psychiatrists believed that recent combat veterans displaying neuroses or psychoses were afflicted by something not combat-related, as no combat-related (or even trauma-related) diagnoses were at their disposal. For the same reason, VA disability claims alleging psychological injury as a result of combat were resoundingly denied. Therapists at the VA avoided talking with their patients about what had occurred overseas since the dominant belief was that couldn’t be to blame for their psychological disturbance.

Pockets of disgruntled veterans formed mutual aid groups in response. One such group was the Twice-Born Men for Vietnam veterans coming out of prison. From providing a forum to discuss the horrors of war to practical job-seeking assistance, the groups brought veterans together to help other veterans. Some engaged in advocacy, including trying to get a combat syndrome included in the then-forthcoming DSM as a new diagnosis.

The sheer number of traumatized veterans attempting to reintegrate into their communities was staggering.

Through the concerted effort of advocates, psychiatrists, psychiatrist-advocates, and a burgeoning base of empirical research, the APA’s resistance to including the new disorder waned. The definition and diagnostic criteria were determined in a workgroup, but its inclusion in the DSM was opposed by some psychiatrists on the grounds that depression, schizophrenia, and alcoholism sufficiently covered the disorders experienced by Vietnam and prior war veterans.

The decade preceding the inclusion of the PTSD diagnosis in the DSM marked a period of deinstitutionalization of psychiatric facilities in the United States. The shift towards community-based care, which often resulted in closures of state hospitals, has been criticized. Ample bodies of scholarly work illuminate the correlation between the dismantling of state psychiatric facilities and an increase in the prison population. It was into this landscape that millions of veterans were returning.

In total, the United States sent 2.7 million people abroad to fight in Vietnam, 700,000 of whom needed some form of psychological treatment. The sheer number of traumatized veterans attempting to reintegrate into their communities was staggering. Prior to the PTSD diagnosis, they could receive neither proper treatment nor a disability pension from the Veterans Administration. Then in 1980, the DSM-III was published and included the recently-identified condition of PTSD. Finally, veterans had a phrase for what they had been experiencing. They also had a right to compensation.

The organization Vietnam Veterans of America (VVA) published repeatedly in the Long Line Writer, a prison newspaper produced in the Arkansas Department of Corrections Cummins Unit. They report being inundated by requests for assistance from veterans incarcerated across the country. The organization maintained membership in the American Correctional Association and created a “Veterans Incarcerated Committee.” Clearly, the need for care was great.

In a May 2000 issue of the Long Line Writer, Joseph Breault writes, “VVA believes that past trauma is a complicating factor in the lives of many veterans incarcerated. Some veterans’ crimes and incarceration may be attributable (at least in part) to this condition.” Later in the same article the author included the 1990 testimony of Representative George Brown before the House Judiciary Committee.

Most veterans who are in prison are effectively prevented from receiving or even knowing about their rightfully due veterans services… we, as a nation, have a special obligation to incarcerated veterans because of their wartime experiences and the fact that PTSD may have been a factor leading up the crimes that these veterans committed.

Barely a decade after the introduction of PTSD, its implications on the criminal justice were of concern to legislators.

There is a correlation between PTSD and an increased risk of incarceration. Irritable behavior and unprovoked angry outbursts, along with reckless and self-destructive behavior, are all among the diagnostic criteria. In certain circumstances, these can manifest as behaviors that constitute crimes. PTSD is a risk factor in developing a substance use disorder, which is a risk factor for experiencing incarceration, other behaviors aside. As stated in a 2019 American Journal of Psychology article, “The most recent (2011-2012) government statistics suggest that veterans compose approximately 8% of the prison population… Other studies present accounts of service members and veterans exhibiting increased tendencies for aggressive, violent, or criminal behavior after returning home from overseas deployments.”

As recently as the 1970s, 25% of all incarcerated people identified as military veterans, so today’s 8% indicates a precipitous drop in the proportion of incarcerated people that are veterans. While on its surface that may seem like an improvement, progress is dubious in context. In that same period, the per capita incarceration rate tripled, according to a recent PEW report. The number of veterans behind bars remained relatively static while the prison population ballooned around them. On a whole, the proportion of people who are veterans has declined substantially.

In absolute numbers, however, veterans are still very much represented across the nation’s prisons and jails. The degree to which combat exposure affects historical and modern-day incarceration rates remains an open question.

Having served in the military seems to be protective against incarceration, on a whole, as it provides housing, employment, and tools for social mobility. But exposure to combat does increase the risk of PTSD in a way that can increase the risk of incarceration, but not in a way that elevates the incarceration risk above that of nonveterans. Many studies go out of their way to parse out demographic information, as the incarceration rate of Black men of lower socioeconomic status is grossly elevated over that of white men, military service or not.

PTSD is now one of the most commonly rated disabilities by the Veterans Administration. The theory underpinning veteran disability compensation is that if a servicemember was injured in service to their country, the country is then obligated to compensate them for that injury as long as they continue to suffer it. A natural extension of this philosophy would be accounting for PTSD’s influence on behavior if those behaviors should result in criminal convictions.

In response, veteran treatment courts have cropped up around the country in attempt to divert them from prison and into community-based resources. A 2015 issue of the Federal Sentencing Reporter shows that progress has been made at redefining the criminality of affected veterans.

This article posits that treatment courts, however, may go even further than traditional drug and mental health courts by genuinely reconceptualizing “the crime” committed by veterans. This occurs through understanding the misconduct as a result of exposure to combat or war zones and, therefore, as a result of military service to the nation…the article addresses… the underlying causes of misconduct, such as PTSD, TBI, substance dependency, and other factors, and the conduct itself.

Traditional courts are more suited to assigning blame than they are to identifying the potential mental health factors that contributed to the commission of the crime. PTSD is now a widely recognized mental health disorder affecting millions of Americans. With the diagnosis’s expansion into the criminal justice system, the doors have been opened for courts to consider mitigating mental health factors upon sentencing defendants. Yet in 2021, the largest provider of mental health treatment in the country remains its jails and prisons.

The historical impact that veterans have had on psychiatric advancement is often overlooked. Trauma-informed care is now the gold standard of medical treatment while a few decades ago the mere existence of trauma was doubted by medical professionals. How society identifies and addresses PTSD has undergone a cataclysmic shift in the past forty years. The 1980 addition of the disorder into the DSM-III had far-reaching implications that spanned well beyond the military and Veterans Administration. The influence of PTSD on behaviors that may constitute crimes is being studied. What other institutions might be influenced by the expanded understanding of trauma’s lasting effects is yet to be seen. When academia and advocacy coalesce, societal change is possible.