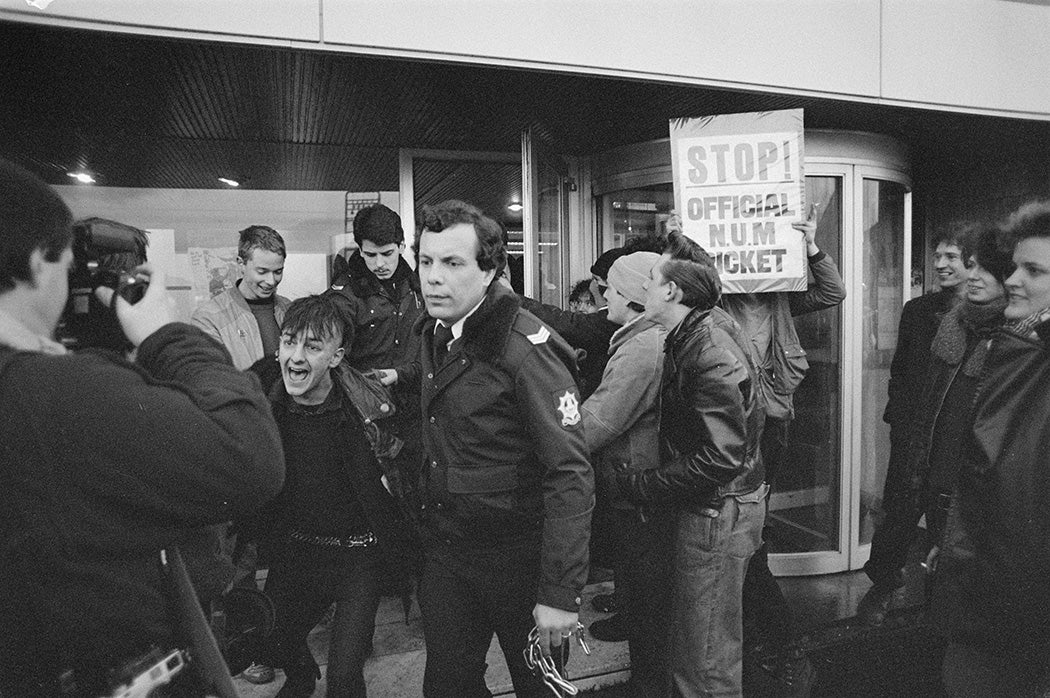 FNV headquarters occupied by sympathizers of the British mine strikers; the police remove the activists
via Wikimedia Commons
By: Livia Gershon
3 minutes
Share Tweet Email Print

In 1984 and 1985, Britain’s labor movement faced a moment of truth: A massive strike by coal miners in defiance of Prime Minister Margaret Thatcher’s anti-union politics. As historical geographer Diarmaid Kelliher writes, the miners had a surprising group of allies: urban gay and lesbian organizers.

At the time, Kelliher writes, unions were under attack generally, making it difficult for the labor movement at large to come to the miners’ aid. When the National Union of Mineworkers (NUM) called for steelworkers to shut production down in support of their strike, the general secretary of the Iron and Steel Trades Confederation declined.

“Steel had experienced many difficult years. All our works were fighting for survival.”

“While our sympathies were with the miners and their case, how could we agree to the threatened shut-down of our industry?” he wrote. “Steel had experienced many difficult years. All our works were fighting for survival.”

As the strike dragged on for months, Kelliher writes, fundraising became a major concern, exacerbated by the freezing of NUM bank accounts. Unable to donate directly to the union, supporters “twinned” with particular mining towns or pits to offer support.

Among these supporters was Lesbians and Gays Support the Miners (LGSM). The group took off after a striking miner spoke to gay activists following the 1984 Lesbian and Gay Pride March in London. Mark Ashton, a gay man and member of the Young Communist League, said that “previously I had this semi-antagonistic attitude towards the organized labour movement, trade unions, macho het bully boys.” But, he said, the miner spoke about “things that we’d never actually expected a miner to think or talk about.” (The story of how miners and the LGBTQ community came together is retold in the 2014 film Pride.)

Along with fellow gay activist Mike Jackson, Ashton began collecting donations for the miners. Kelliher writes that one major source of donations was The Bell, a pub Jackson described as “mainly used by young people and unemployed people, quite poorly paid young people.” Funds also came in from Gay’s the Word bookshop, which was facing its own political trouble at the time, including prosecutions for “indecency.”

LGSM “twinned” with a mining community in the Dulais Valley in Wales. When members of the group visited for a weekend, one local organizer admitted that they were expecting “a bunch of weirdos.” In reality, the visit broke down stereotypes on both sides, and built relationships that lasted beyond the strike.

The miners and lesbian and gay activists found they had much in common, including mistreatment by police, misrepresentation in the media, and direct attacks from the conservative government. LGSM wrote that “if this strike isn’t won, we as Lesbians and Gays have a lot to lose when the Tories and their henchmen come for us.”

This turned out to be prescient. After Thatcher crushed the strike, she began pushing laws prohibiting the “promotion” of homosexuality, known as Section 28. NUM stood with the LGBTQ community against the laws, but, with many mines already closed, its power was ebbing. Still, Kelliher writes, the moment of solidarity between the two groups marked a shift in the British left toward a broader focus on issues beyond class.