In the 1970s, the National Front blamed immigrants for the UK’s economic problems. Anti-racist groups formed in response, with the help of pop music. 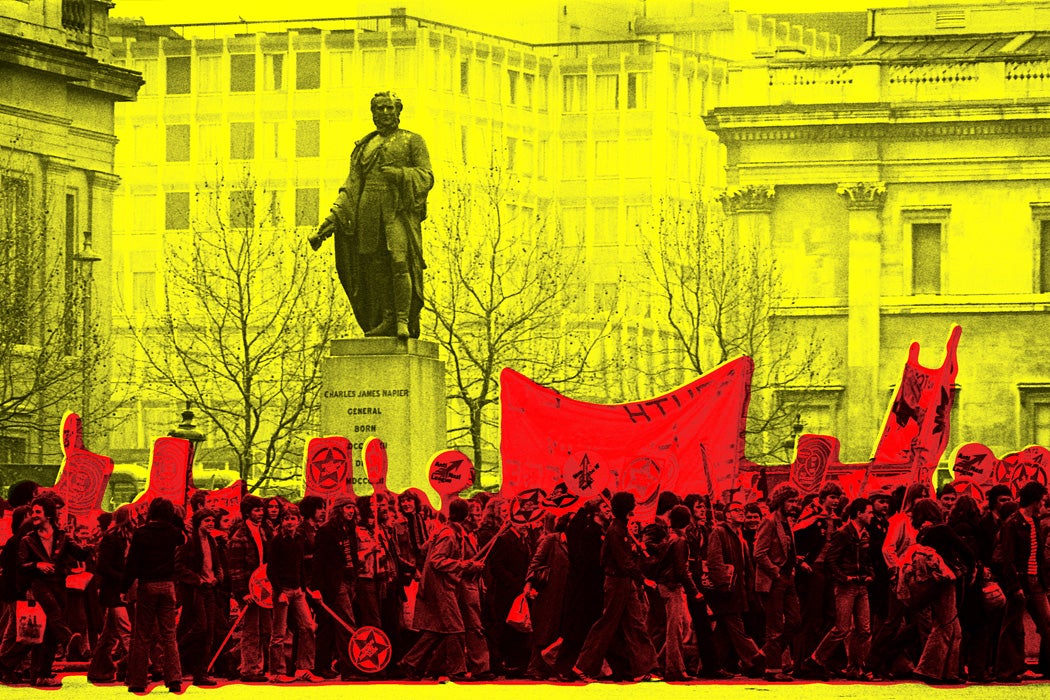 In contemporary society, pop music and politics mix freely—from voter registration drives at music festivals, to celebrities like Taylor Swift weighing in on elections. Back in 1970s Britain, however, that combination created controversy within political organizations.

Historian Evan Smith writes that in the late 1960s, a new organization formed, known as the National Front (NF). Appealing to some far-right members of the Conservative Party, it called for the expulsion of non-white immigrants from England. When an economic crisis hit the country in the 1970s, the NF began seeking support from white, working-class Labour voters, arguing that nonwhite immigrants were causing economic problems. Soon, NF members were holding street marches and sometimes violently attacking people in black communities.

They called for “a rank and file movement against the racist poison in rock music.”

In reaction, the British far left, including the Communist Party of Great Britain and the Socialist Workers Party (SWP), began organizing antifascist and antiracist campaigns. While the Communists focused on peaceful protest and cooperation with local authorities to curb the National Front, some SWP activists directly confronted them in the streets.

Some young activists with ties to the SWP wrote an open letter in response to racist comments made by Eric Clapton. Beyond criticizing an individual musician, they called for “a rank and file movement against the racist poison in rock music.” This was the beginning of the Rock Against Racism (RAR) movement.

Smith writes that, while the SWP was a crucial supporter of RAR, it did not completely control it, or use it as a recruiting tool. Instead, RAR built a culture on the celebration of working-class, mixed-race punk and reggae music scenes, fanzines, and events that combined live music with activism.

In contrast, the Communist Party had long distrusted pop music, which it saw as a form of capitalist propaganda, bringing American materialism and moral decadence to the country. Communist organizers favored folk music, considered an authentic art form of the people.

Starting in 1978, RAR organized a series of big carnivals, drawing anywhere from 2,000 to 100,000 people each. Smith writes that the SWP hailed the events as a victory that drew hundreds of thousands of young people into antiracist organizing.

Ultimately, the results of Rock Against Racism were mixed. The National Front declined in influence after the mid-1970s. RAR didn’t necessarily lead youths to join socialist organizations or the Labour Party but it did encourage many young people to identify with antiracist and left-wing politics. Pop music has been important in political organizing ever since.

Are the Kids United?: The Communist Party of Great Britain, Rock Against Racism, and the Politics of Youth Culture
By: Evan Smith
Journal for the Study of Radicalism, Vol. 5, No. 2 (FALL 2011), pp. 85-117
Michigan State University Press