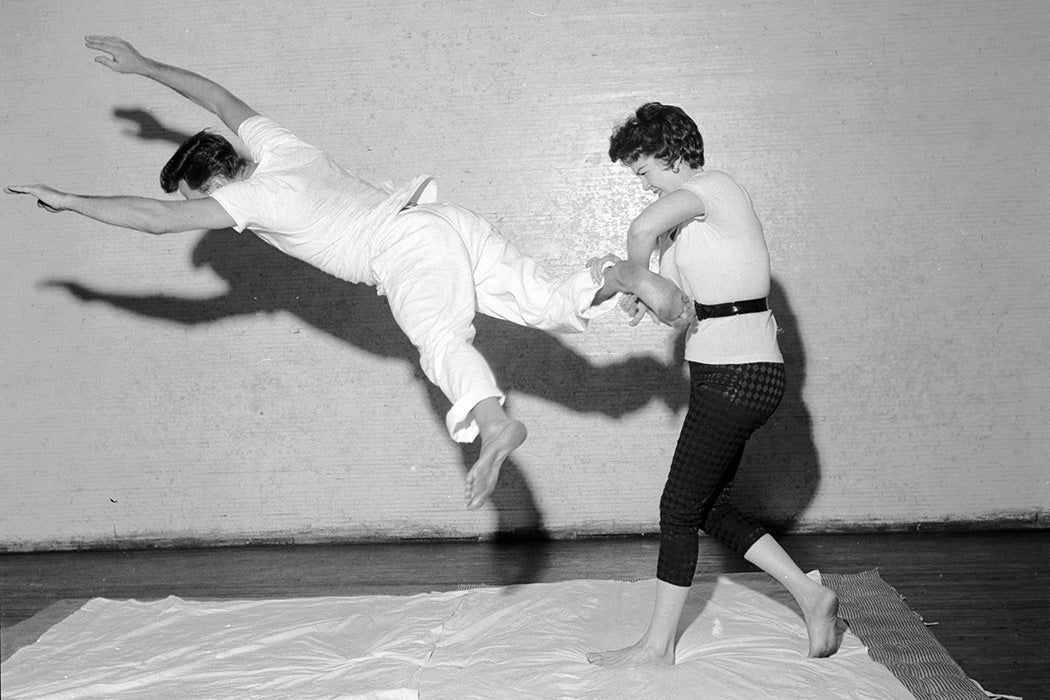 At a self-defence demonstration a woman uses a judo heel and leg turnover against a kicking attacker.
Getty
By: Matthew Wills
3 minutes
Share Tweet Email Print

In 1909 twenty-year-old nursing student Wilma Berger became a local sensation in Chicago when she defended herself against an attacker. She later demonstrated her technique on unbelieving policemen, throwing a detective as she had her attacker. While Berger was a bit of a ringer—she had studied under Tomita Tsunejiro, who helped introduce judo to the United States—she was also representative of a new self-assertiveness in women learning self-defense methods.

In the words of historians Wendy Rouse and Beth Slutsky, these women saw self-defense as a challenge to “the power structure that prevented them from exercising their full rights as citizens and human beings” in the public sphere.

“Women between the 1880s and 1920s empowered their bodies to fight violent stranger assaults, political disfranchisement, and family violence through their training in the ‘manly arts’ of self-defense,” they write.

During the Gilded Age and Progressive Era, American women turned to boxing and wrestling as well as imported martial arts as an expression of empowerment through physical training.

In 1901 a horrified male minister said they were threatening to break down “barriers of distinction between the sexes.”

Reformers and suffragists led the way. Suffragists, especially in the United Kingdom, had “used their bodies in order to convey their discontent and resist oppression through marches, pickets, and hunger strikes,” Rouse and Slutsky write. Self-defense training seemed the next logical step: “arming women with the physical skills they need to defend themselves from attacks—or at least fear of attack—on the streets as they negotiated their place in the public space of the city.”

Needless to say, some men denounced the women for being indecent and unnatural. In 1901 a horrified male minister said they were threatening to break down “barriers of distinction between the sexes.” But others voiced support. Harrie Irving Hancock, whose book Physical Training for Women by Japanese Methods (1905) was one of a number of texts he wrote about jiu-jitsu for women and children, evinced some potentially advanced thinking when he wrote that the phrase “weaker sex” needed to be “stricken from the language.”

It wasn’t just men doing the teaching, though. Berger herself taught self-defense even before her celebrity. Washington heiress Martha Blow Wadsworth seemed to make a point of duplicating any macho exhibition by President Teddy Roosevelt. When Roosevelt invited visiting Japanese judo master Yoshiak Tamashita to instruct him, Wadsworth organized a class for women under the instruction of the master’s wife, Fude.

According to Rouse and Slutsky, “The women who publicly practiced judo on the lawn of the White House clearly recognized their appropriation of the manly arts as signaling women’s new roles in the political arena.”

The authors note that while well-off women could pay for instruction, women of fewer means had access to free pamphlets and illustrated articles in newspapers. The Yabe School of Jiu-Jitsu in Rochester, New York, for instance, offered free lessons through the mail. Mary Steckler, who pinned down a would-be mugger in 1906 until police arrived, was self-taught.

None of this would seem particularly radical today. Since the 1960s, in fact, the merging of both physical and political empowerment has become commonplace for American women. Unfortunately, the threat of male violence against women still connects the pioneers at the turn of the twentieth century to the present.