Animation workers took to the streets, carrying signs with bleakly humorous slogans. One read: “I make millions laugh but the real joke is our salaries.” 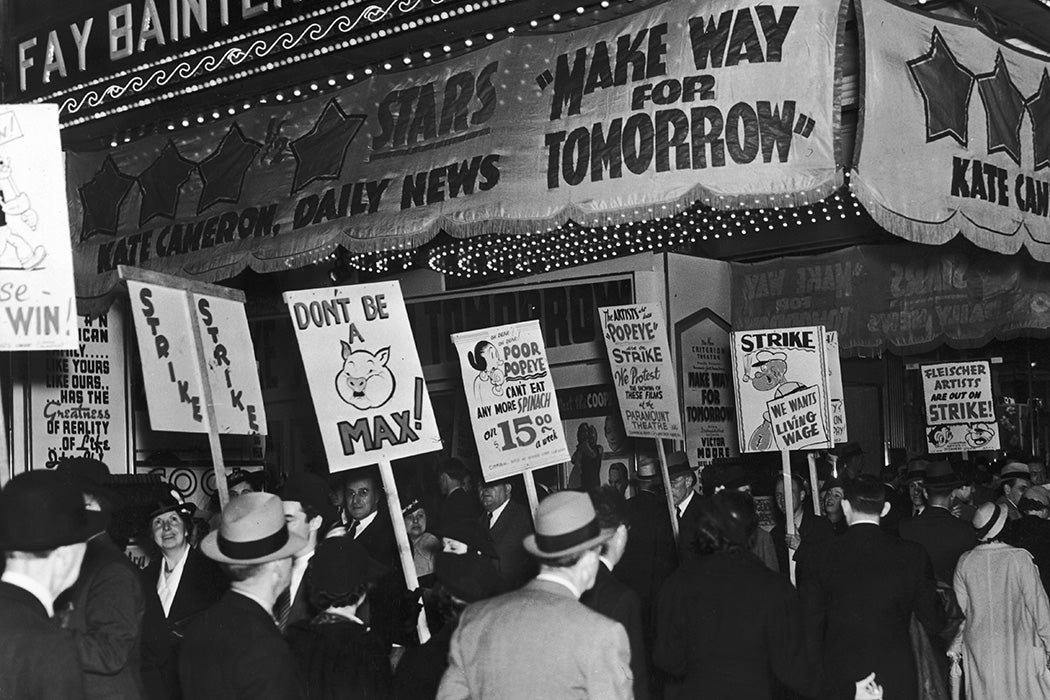 Employees of the Fleischer Studios picket the New Criterion Theater in New York to protest against the showing of Popeye and other cartoons drawn by striking Fleischer artists, 1937.
Getty
By: Kristin Hunt
4 minutes
Share Tweet Email Print

Sadie Bodin was not fired over union activity—on that, Van Beuren Studios was adamant. The animation studio knew that it wasn’t exactly legal to punish workers for organizing under the Roosevelt administration’s new National Recovery Administration, which aimed to promote fair labor practices during the Great Depression. But it also knew that federal protections for unions were still weak and hazy. It was early 1935, when Roosevelt had yet to sign the Wagner Act. The studio brass was curious to see how far it could test the limits. So they said Bodin, an inker who had met with union reps, was let go for her bad attitude.

That spring, Bodin and her husband appeared outside the studio’s Manhattan office with signs. “Van Beuren Violates Sec. 7-A NRA by Firing Union Labor for Union Activity,” they read. The couple’s protest of two remained just that over the ensuing days, a lonely endeavor that Bodin’s coworkers did not join, but it was the first time anyone had picketed an animation studio, and it wouldn’t be the last. Two years later, employees at Fleischer Studios would embark on a five-month strike that led to the first union contracts in animation, a subsequent strike at Disney, and groundbreaking new works from the frustrated employees who left these animation shops to set out on their own. It was a seismic event that forever changed American animation, and successfully challenged the young industry’s punishing work standards. Fleischer Studios just wouldn’t live to see it all.

By 1937, Max and Dave Fleischer were well-established names in animation. The brothers were responsible for characters like Koko the Clown, Betty Boop, and Popeye, all cartoon headliners who starred in shorts distributed through Paramount. These creations naturally required a lot of upkeep, which is why the Fleischers employed a large production staff. Before the strike, it included at least 167 people, according to the animation historian Harvey Deneroff.

Increasingly, those staffers were finding their work overwhelming, underpaid, and unfulfilling. Deneroff notes that Fleischer animators reported incomes as high as $100 per week in 1930, but wages had dipped significantly by the middle of the decade. Don Figlozzi, who would later become a popular New York Daily News cartoonist, claimed a salary of $27 a week in 1935.

The uniformity of these menial tasks, which did not allow for individual flourishes or ideas, chipped away at dwindling morale.

New hires or “inbetweeners” were also finding less room for advancement, as they were often stuck sketching the same models over and over again, on brutal schedules. The uniformity of these menial tasks, which did not allow for individual flourishes or ideas, further chipped away at dwindling morale. “This rigidity went against the self-image of a number of workers who saw themselves as traditional ‘creative’ artists, rather than as elements in an assembly-line process,” Deneroff writes.

Perhaps the biggest impetus, however, came in 1934, when a tragedy revealed the unsustainability of this work. Dan Glass, another “inbetweener,” came down with a case of tuberculosis that killed him the following year. His colleagues were horrified, especially since they saw an emerging pattern. Another one of their own, Lillian Oremland, had contracted the same disease in 1931. She returned to work after a leave of absence, but struggled to regain her health. After another period of sick leave, the company refused to take her back. Others in the animation department believed their working conditions—not just the long hours, but the lack of windows and air conditioning—contributed to the illness that cost Oremland her job and Glass his life.

The strike officially began in May of 1937, after multiple conversations and coordination with the Commercial Artists and Designers Union (CADU). The workers, mostly inbetweeners, wanted a 35-hour work week, increased wages, paid time off, and of course, recognition of their union. When Max Fleischer refused, they took to the streets, carrying signs with bleakly humorous slogans. One read, “I make millions laugh but the real joke is our salaries.”

The dispute quickly grew contentious. On that first night of picketing, a fight broke out between the striking workers and a few Fleischer employees who had not joined their protest—and were attempting to reenter the building after a dinner break. Production halted for a few days, but soon enough people returned to work, or were replaced with new employees. The union nearly succeeded in banning Fleischer shorts from movie theaters through an alliance with the IATSE Projectionists Local 306. But another party (according to industry rumors, Paramount) intervened at the last minute to stop the boycott from taking effect.

In October, the Fleischers finally agreed to some of the union’s terms. The New York Times reported a deal including “wage increases, the details of which were not made known, a forty-hour work week, vacations and sick leave with pay, extra pay for overtime and guarantees of adequate production by the union.” Future disputes would go to arbitration, and any future strikes or lockouts were off the table. Everyone returned to work, though it wouldn’t be in the same office for long. The following year, Fleischer Studios moved to Miami, where, the educator Donna Dial notes, union presence was much weaker. Max Fleischer had begun negotiations with the Miami Chamber of Commerce just a month after the strike commenced.

The move, as well as the brothers’ own personal squabbling, ultimately sunk the studio, which was swallowed up by Paramount in the early 1940s. Its demise offered a warning to other companies who refused to take labor rights seriously, which the Fleischers’ main rival would learn soon enough. Disney employees embarked on their own strike in 1941, emerging with a hard-won contract after five weeks. Much like the Fleischer brothers, Walt Disney never got over it, and displayed such hostility toward the union that many animators never returned. Instead, they moved on to other iconic projects, including Looney Tunes and Tom & Jerry. They were no longer inbetweeners. They were the competition.

"We Can't Get Much Spinach"! The Organization and Implementation of the Fleischer Animation Strike
By: Harvey Deneroff
Film History, Vol. 1, No. 1 (1987), pp. 1-14
Indiana University Press
Cartoons in Paradise: How the Fleischer Brothers Moved to Miami and Lost Their Studio
By: Donna Dial
The Florida Historical Quarterly, Vol. 78, No. 3 (Winter, 2000), pp. 309-330
Florida Historical Society 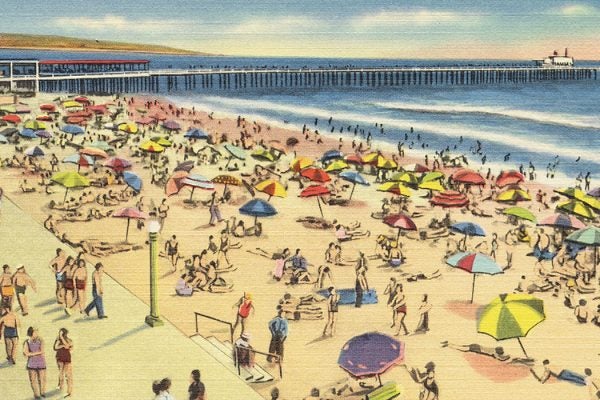 The Five Types of Summer Vacation

Each of them has a distinctive structure and a complex history.