Remaking Betty Boop in the Image of a Housewife

Betty Boop was literally designed to be a bombshell, but around 1935, her creators decided to change her appearance. 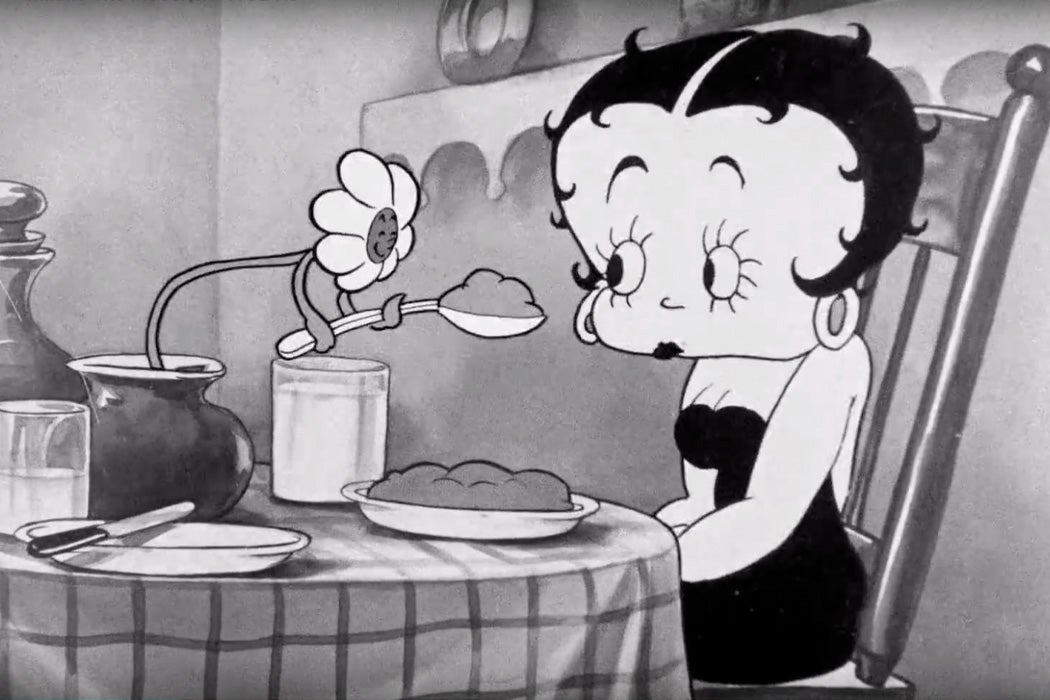 Betty Boop was, to borrow her creator’s phrase, “a suggestion you could spell in three letters: s-e-x.” Created for cinema in 1930 and billed as the “box office baby” of Paramount’s animated shorts, she offered a stark contrast to Disney’s family-friendly Minnie Mouse and Clarabelle Cow. People actually lusted after this cartoon flapper, including federal judges. In his ruling on a copyright infringement case concerning Miss Boop, Judge John M. Woolsey remarked:

The character which was depicted combined in appearance the childish with the sophisticated—a round baby face, with big eyes and a nose like a button, framed in a somewhat careful coiffure, with a body of which perhaps the most noticeable characteristic is the most self-confident little bust imaginable. The result is very taking and the cartoon, shown all over the world, presented a strong temptation to an infringer.

Betty was literally designed to be a bombshell, but around 1935, something strange happened. Her short, strapless dress got a little longer. She lost some of her signature curves, as well as her city apartment. By the time the decade ended, Betty had transformed into a full-blown housewife who baked and scolded her son for staying up past his bedtime. This dramatic makeover was a byproduct of the Production Code, a conservative set of standards applied to all movies released in the U.S. between 1934 and 1968. But, as the media historian Heather Hendershot argues, Betty’s evolution was also a sign of the changing times. As America prepared to enter World War II, flappers were out, and middle-class moms were in.

The top of her dress was constantly falling down and, as Hendershot notes, even the shape of her head resembled a butt.

When Betty made her debut, in 1930, she was the latest creation from Fleischer Studios, an animation outfit run by Max and Dave Fleischer. The brothers had already developed a stable of popular characters, but Betty would eclipse them all with her spit curls and swinging hips. In her first short, “Dizzy Dishes,” Betty sings to a crowd of rapt male patrons, leaning over the stage and hiking up her skirt as she warbles her signature catchphrase: “boop boop a doop.”

Flirty, full-figured, and a whole lot of fun, Betty was a comically exaggerated male fantasy. The top of her dress was constantly falling down and, as Hendershot notes, even the shape of her head resembled a butt. On this basis alone, Betty couldn’t possibly survive the Production Code, which banned “indecent or undue exposure,” “dances suggesting or representing sexual actions,” and “suggestive postures or gestures.”

As a working-class single girl in the city, Betty was “frequently the subject of both sex and violence,” the scholar Amelia S. Holberg writes, at the hands of bosses, landlords, and random acquaintances. These threats were simply a fact of life for many women at the time—particularly poor women from immigrant families, which Betty is coded to be in “Minnie the Moocher”—but under the new guidelines, they were considered inappropriate content for moviegoers.

According to Hendershot, it took about a year for the Code to catch up to Betty Boop. The biggest and most obvious changes concerned her body, which was scaled to less scandalous proportions. “The post-Production Code Betty is taller than the old, retaining her babyish voice and naivete, but losing much of her infantile look,” Hendershot writes. “The new body is less pudgy; her hips and thighs, formerly out of proportion to her short body and narrow waist, are drastically slimmed down, and her narrow waist is broadened.” Betty got new clothes to match her new figure. Her dresses suddenly had straps, sleeves, even collars. All the extra fabric helped disguise her infamous garter, which only made occasional appearances after 1935.

Significantly, Betty’s stories also changed. She was no longer fending off creepy employers, or dancing for drooling fans. She wasn’t moving much at all, as her dilemmas were now confined to a suburban home. In “Swat the Fly,” for instance, Betty spends the entire short trying to kill a bug—and nearly destroys her kitchen in the process.

With her new look, Betty Boop was finally up to Code. Betty 2.0 was also more in step with contemporary animation trends, which after Snow White and the Seven Dwarves were basically dictated by Disney. She was also remade to reflect contemporary fashion trends, which had abandoned the flapper look before Betty even existed. After all that “modernization,” Betty was unceremoniously retired in 1939. The makeover was a bust. She rode out the next few decades in relative obscurity, until television syndication and home video launched her back into the spotlight. Nowadays, she can be seen on all kinds of collectibles—and she looks like her old self again.