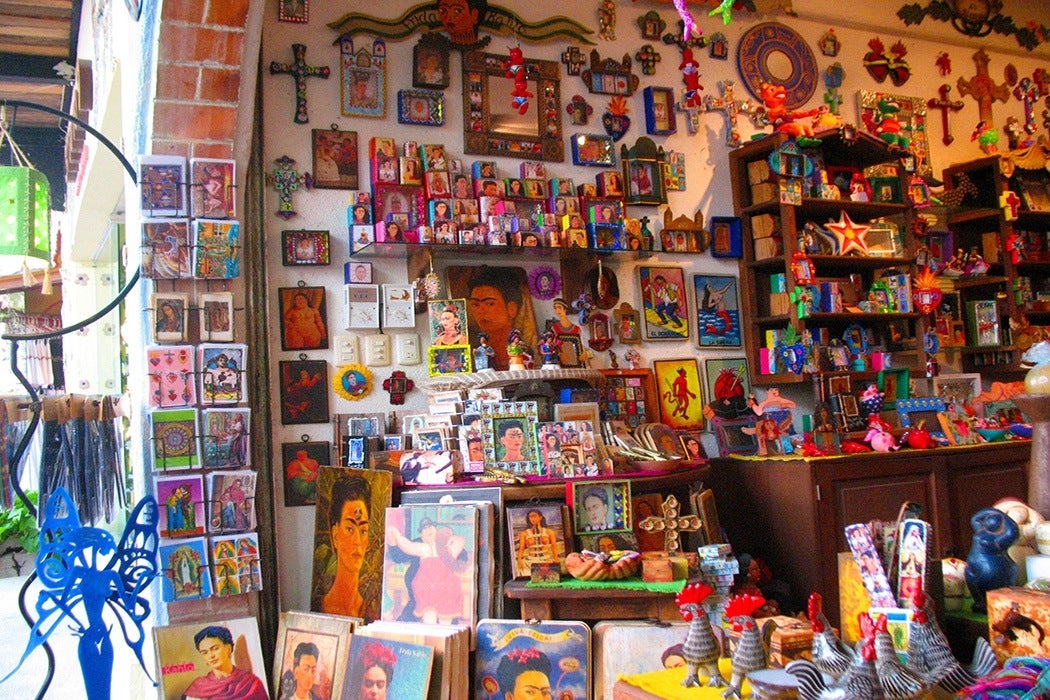 Recently, rare video footage of Frida Kahlo and Diego Rivera has gone viral. Though both Kahlo and Rivera are both known for their torrid love affair and their enduring and individual artistic legacies, Kahlo has also become a sign of material culture herself, with her recognizable face on gift bags, clothing, cupcakes, keychains, tiles, and other memorabilia.

Lis Pankl and Kevin Blake examine the multiplicity and complexity of Kahlo’s historiography, analyzing the role of material culture that Frida Kahlo draws upon in her own work as well as the material culture surrounding the rise of her image itself as an internationally recognized icon. They argue that “Kahlo’s appropriation and production of material culture began even in her own lifetime and continues to multiply at an astonishing pace in the current milieu.”

The cult of Kahlo (also called “Fridamania,” “Fridolatry,” and “Kahloism”) has made her face as famous as her art itself. Pankl and Blake note:

Kahlo now has a global pop culture status that challenges the likes of Elvis and Marilyn Monroe; yet, it is the attention she receives in academic space, in the international art world, and as an emerging national symbol in Mexico that makes her unique as an icon of material culture.

The authors highlight “the growing interest exhibited by Mexico towards Kahlo—an interest that is quickly pushing Kahlo to the status of national heroine.” Besides examining the ways in which pop culture has appropriated Kahlo’s imagery, Pankl and Blake also point out how Kahlo herself appropriated material culture.

The artist often wore and depicted herself in particular clothing in order to manipulate and visualize material culture. Kahlo used fashion to construct both her identity as a public persona and her biography itself. For instance, Kahlo wore “a household maid’s blouse and skirt for her 1929 wedding” instead of the more traditional white European wedding dress. In addition to opting for this less customary wedding fashion, Kahlo also chose to capture this decision and “identity construction” in a painting three years later in “Frida and Diego Rivera.”

Kahlo emphasized her Mexican heritage and even constructed her “Mexicanness” through her art, drawing on material culture from her country, depicting herself as a Tehuana woman in traditional Tehuantepec costume (as in her 1943 painting “Self-portrait as a Tehuana”) or as the goddess Tlazolteotl (in her 1932 painting “My Birth”). Kahlo went so far as to revise her biographical history, choosing to alter her 1907 birthdate in order to make it correspond with the Mexican Revolution of 1910.

Kahlo’s historiography is complex and messy, not only from the outpouring of faulty scholarship since her death, but also because of Kahlo’s own “manipulation of it during her own lifetime.” Pankl and Blake argue that Kahlo scholars “have the indomitable task of reconciling her larger-than-life persona that is both imprinted on the public imagination and reproduced again and again in various cultural artifacts.”

Through studying material culture surrounding Frida Kahlo, viewers, historians, scholars, and “Fridolatrists” alike can “see how one person not only represents material culture but also produces material culture and how this intersection creates a greater degree of iconization that is lasting and widespread.”

Our Friday Reads rounds up five new books out this week, and links to related content you won't find anywhere else.