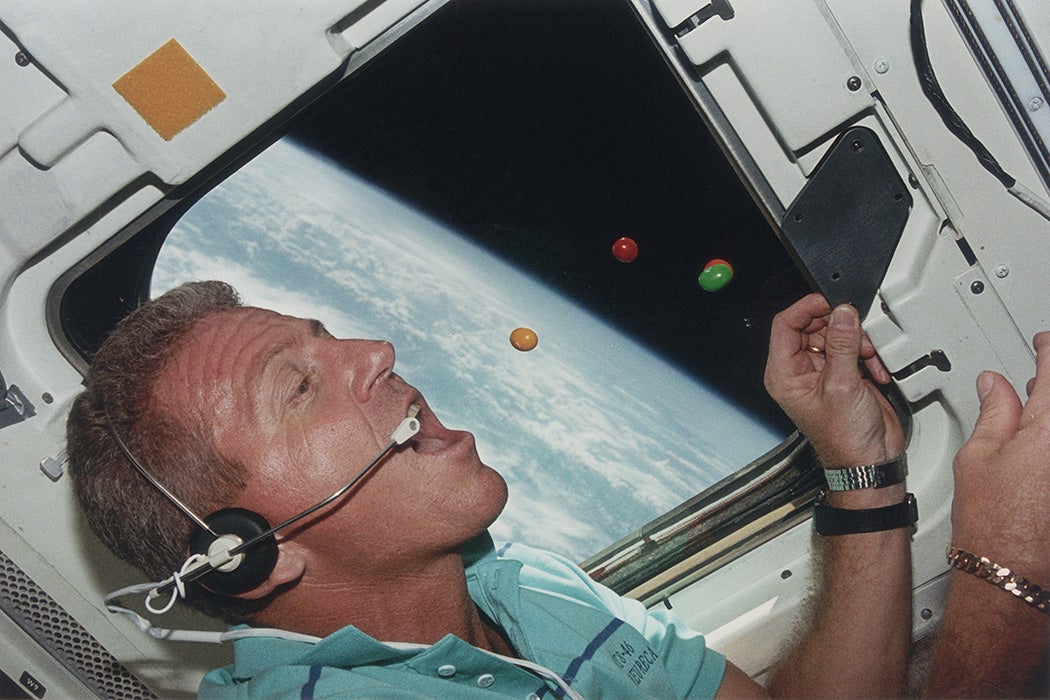 When scientists sent the first humans careening into the vacuum of space, they had no idea what food would do to a body in orbit. Could a person swallow while in weightless flight? Does digestion even work without gravity? In 1961, Russian cosmonaut Yuri Gagarin quelled this fear by successfully swallowing and digesting a paste of beef and liver. That same year, cosmonaut Gherman Titov ate crackers while orbiting Earth. A few months later, American astronaut John Glenn sucked 80 calories of applesauce from an aluminum tube. No doubt Gagarin, Glenn, and Titov would envy the diets of astronauts living on the International Space Station today—they recently got to chow down on tacos for dinner, using fresh chili peppers grown in orbit.

The ideal space meal is nutritious and compact. The human body requires a lot of calories to survive in zero-gravity—at least 2,500 per day. “From the beginning the objective of a spacecraft food system has been to provide a safe, nutritious food which is both light and compact,” writes scholar Paul Rambaut in his 1986 review of food and nutrition in space. First and foremost, early space food was easy to swallow, simple to prepare, and had a long shelf life.

“Even the best-preserved food isn’t worth much if the astronauts get tired of eating it.”

The riddle, of course, is ensuring that this safe, nutritious food is also appetizing. “Even the best-preserved food isn’t worth much if the astronauts get tired of eating it,” writes journalist Alexandra Witze. Unfortunately, the earliest space food was far from gourmet. “Mercury astronauts flew with toothpaste-like tubes and compressed cubes of nutrition,” writes Witze. The nutrition cubes were coated with fat to reduce crumbs and greasiness. According to Rambaut, the cubes “were unpalatable and were poorly digested.”

The Gemini program introduced dehydrated foods, including fruits, salads, meats, soups, and deserts. Drying out the meals helped save weight during launch. They were meant to be rehydratable, but it “was a slow process and detracted from the acceptability of these foods,” writes Rambaut. On flights with the Apollo program, crew-members ate sandwiches on bread made from irradiated flour (flour that was sterilized through exposure to radiation). The crew was also given thermostabilized food in foil packages, which thankfully contained “a normal amount of moisture,” according to Rambaut. In the 1970s, Skylab space station introduced foods that were pre-cooked and frozen. All food was packaged individually in sealed aluminum cans.

Unfortunately, all of that packaging has downsides. “Packaging becomes a problem on long trips. Plastics, foils and other existing space food wraps aren’t designed to keep goods fresher for longer than the 18 months NASA currently requires,” writes Witze. A great way to reduce packaging is by growing the food right on the ship. Astronauts aboard the ISS have successfully grown lettuce, radishes, and kale. The chili pepper experiment was two years in the making. Someday, astronauts may require an even greater supply of space food—scientists have also investigated the possibility of raising chickens, fish, snails, newts, sea urchin larvae, and silkworm pupae.

Today, American astronauts still rely mostly on packaged, freeze-dried foods. Scientists continue to devise healthy menus that are more varied and, hopefully, more appetizing. “Probably the ideal space food lies somewhere in between a simple formula diet and a diet of great variety,” writes Rambaut. “We could, if we are not careful, provide food upon which space crews could survive a lot longer than they would care to live.”