Returning large, wild herbivores to Europe could help maintain soil health and discourage invasive species, but these cows have some political baggage… 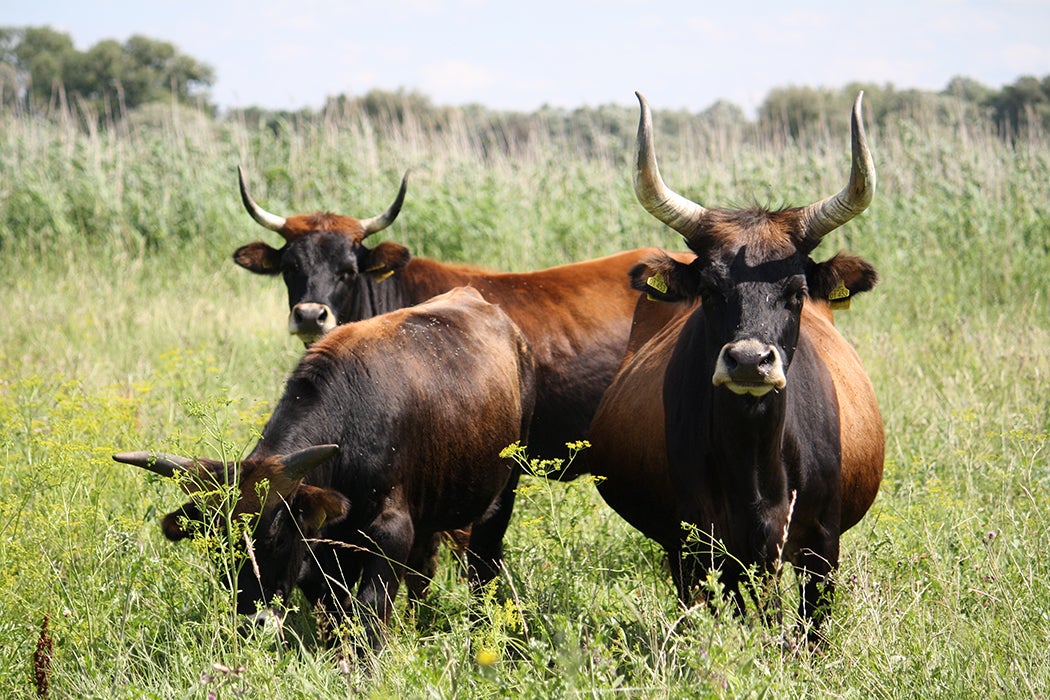 The European rewilding movement has some bovine baggage. In 2009, when a breed of cattle called Heck were imported into England from Germany to be let loose on private land in Devon, the British tabloids ran amuck with “Nazi Cows” and “Herd Reich” headlines.

What the Heck was going on?

“To be clear from the outset, although the histories of Heck cattle make them symbolically charged, their material form and political deployment are not now ‘Nazi’ in character. Nor, of course, is rewilding Europe in the twenty-first century a fascist endeavor.”

So explain geographers Jamie Lorimer and Clemens Driessen in the context of returning large wild herbivores to Europe. Big herbivores are the “naturalistic grazing” component of rewilding efforts. Able to survive outdoors in all weather, such wild grazers keep invasive species at bay, beneficially break up the soil, and recycle nutrients through their fertilizing dung—and, ultimately, their corpses.

The problem is that Europe doesn’t have any large wild herbivores anymore.

The problem is that Europe doesn’t have any large wild herbivores anymore. Once the aurochs, with a range encompassing much of Eurasia and North Africa, did all this. The animals were the ancestors of Bos taurus, the species that makes up all modern breeds of cattle. Artistic representations of aurochsen (the plural of aurochs in both German and English) are found in caves dating back 36,000 years. The last remaining wild “ur-oxen” survived in Polish forests until remarkably recently, before clear-cutting, hunting, and competition from domesticated cattle led to their extinction around 1627.

Almost a century ago, two German brothers started an attempt to back-breed various strains of hardy cattle to get something like an extinct aurochs. The sons of a famous director of the Berlin Zoo, Lutz and Heinz Heck started their efforts in Weimar Germany. They both ran zoos in the 1930s and became enthusiastic Nazis, with the full support of the Nazi Party behind their efforts. They dreamed of herds of wild cattle roaming the eastern European plains, a landscape murderously depopulated of non-Germans.

The Hecks didn’t, in fact, “recreate” an aurochs. They did come up with hardy breed of cattle that, thanks to an influx of Spanish fighting bulls, proved to be fairly aggressive. Some of these survived WWII. Starting in the 1980s, “under very different political circumstances” descendants of these Heck cattle were imported and introduced in the Oostvaardersplassen, an early rewilding project in the Netherlands that called for big, de-domesticated herbivores.

Lorimer and Driessen offer a more nuanced approach to the “genealogy of rewilding” than the hysterical tabloids, arguing that there are a “multiplicity of rewildings past and present,” only some of which are tainted by “reactionary tendencies.”

The authors do note that manifestos of rewilding “are often ahistorical and apolitical.” There are, for example, “various ontologies, geographies, and epistemologies of wilderness in Europe.” Defining “wild,” “wilderness,” and “rewilding” are important baselines. Considering that all “claimed returns to the wild are fundamentally political endeavors with fraught spatial histories,” rewilding definitely warrants critical thought and a historical grounding.

Meanwhile, the Tauros Programme is attempting to back-breed cattle to as close to aurochsen as genetically possible. Other rewilding projects simply use existing heritage breeds of cattle as proxies for aurochs. Knepp Farm, whose story is told in Isabella Tree’s Wilding: Returning Nature to Our Farm, uses old English longhorns.

English longhorns aren’t quite wild cattle, but they’re also much hardier than the usual domesticated breeds. They roam the property year around, functioning as de facto ecological engineers, not least in dropping cowpies that become overrun with multiple species of dung-beetles that have otherwise disappeared from farms, whose cows have to be pumped full of drugs just to get by.

From "Nazi Cows" to Cosmopolitan "Ecological Engineers": Specifying Rewilding Through a History of Heck Cattle
By: Jamie Lorimer and Clemens Driessen
Annals of the American Association of Geographers, Vol. 106, No. 3 (May 2016), pp. 631-652
Association of American Geographers