Some scholars and scientists are calling climate change the invisible player in Syria’s ongoing civil war. But is that too simplistic an explanation? The 2006-7 drought in the greater Fertile Crescent—present-day Iraq, southeastern Turkey, western Iran, Syria, Lebanon, Jordan, Palestine, and parts of Egypt—was the longest and most severe drought ever recorded. Climate scientists Colin P. Kelley et al. link this drought to a long-term warming trend in the eastern Mediterranean which can only be explained by a rise in greenhouse emissions and human-induced climate change.

The same scientists also link this drought to heightened social vulnerability and the onset of the Syrian civil war. In the wake of the drought, agricultural collapse pushed rural people into cities in large numbers. Competition over resources and jobs, already scarce following decades of poor governance, took on an ethnic dimension. Kelley et al. quote a female farmer who states, “The drought and unemployment were important in pushing people toward revolution. When the drought happened, we could handle it for two years, and then we said, ‘It’s enough.'”

This claim has not gone unchallenged. In a rebuttal to this theory published in The Guardian, social scientists Jan Selby and Mike Hulme attribute Syria’s rural-urban migration to President Bashar al-Assad’s economic liberalization policies which scrapped agricultural fuel subsidies, plunging farmers into massive debt. Selby and Hulme also question the assertion that migrants were targeted as causing social stress. They fear that drawing causal links between climate change and conflict become “rhetorical moves to appeal to security interests or achieve sensational headlines,” ultimately doing disservice to both issues.

The role of agricultural policy deserves particular attention for the way it has exacerbated the Syrian civil war. Brent Eng and José Ciro Martinez note that until 2007, Syria’s self-sufficiency in food production, specifically wheat, was a cause célèbre in the wider region. But the next five years’ mismanagement of resources, reduced subsidies, and drought pushed a robust agricultural sector into decline, raising food prices and stirring popular discontent against President Bashar al-Assad’s government. After the onset of war, food stocks and agricultural machinery were attacked by the regime to starve out rebel areas, thus turning temporary drought-induced food shortages into long-term shortfalls. 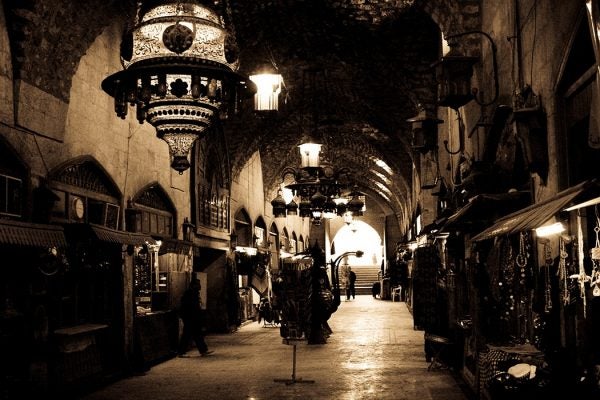 Can Syria's history help us understand the situation there today?