The US has created its own “civil religion,” a complex body of ambiguous public assertions of faith that obscure the varied, private beliefs of the populace. 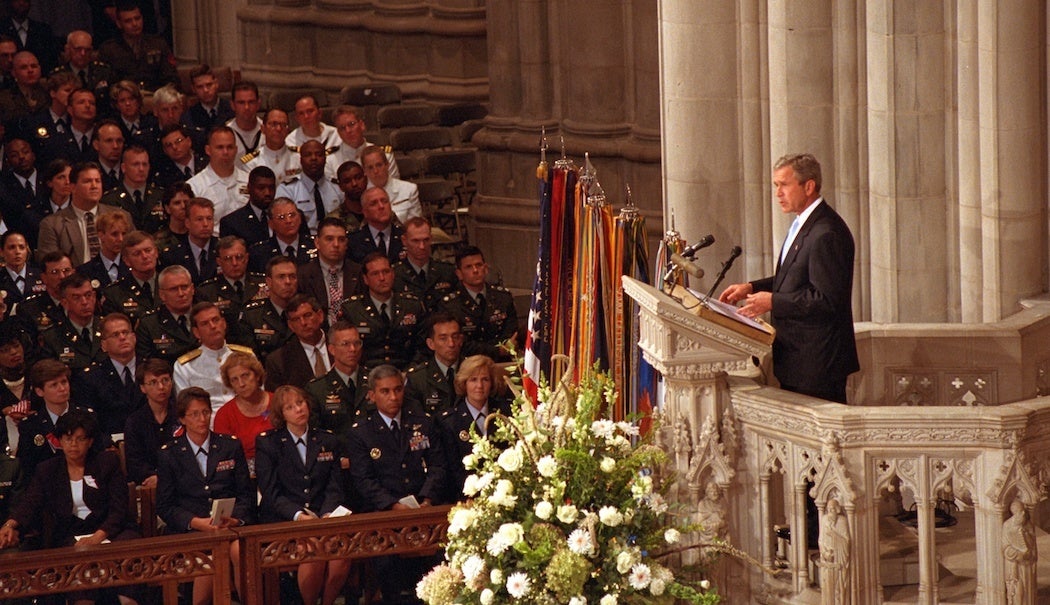 President George W. Bush on the National Day of Prayer and Remembrance, Sept. 14, 2001, at the National Cathedral in Washington, D.C.
U.S. National Archives via Flickr
By: The Editors
3 minutes
Share Tweet Email Print

In this weekend’s New York Times Sunday Review, Susan Jacoby digests a recent Pew Research poll that finds secular Americans the second-largest religious demographic, after Christians (broadly defined). Why, she asks, does such a significant group still have so little lobbying power? Why are American politics still defined by “God Bless America”?

Despite the extraordinary swiftness and magnitude of this shift, our political campaigns are still conducted as if all potential voters were among the faithful. The presumption is that candidates have everything to gain and nothing to lose by continuing their obsequious attitude toward orthodox religion and ignoring the growing population of those who make up a more secular America.

In fact, politicians, and especially their speeches and the religious fervor within them, have long been key signifiers for the way Americans think about religion. “Civil religion,” a phrase derived from Jean-Jacques Rousseau, has been used to encompass these baseline ideologies.

The classic text on the subject is Robert Bellah’s “Civil Religion in America,” originally published in Daedalus in 1967 and reprinted many times since. This article asserts that politicians since Washington have made ceremonial reference to God—not because of a dominant Christian culture, but because the US has actually created its own “civil religion,” a complex body of ambiguous public assertions of faith that obscure the varied (and often oppositional) private beliefs of the populace.

Robert Bellah suggests that political speeches mention God in order to invoke a Pope-esque power, a divine right to rule.

Bellah suggests that political speeches mention God in order to: invoke a Pope-esque power, a divine right to rule; remind everyone, through their ambiguity, of the doctrine of religious tolerance; link America’s settling to the idea of a Promised Land; and enforce the idea of supernatural balance (an afterlife that rewards virtue and punishes vice). One would think the threat of law enforcement would be enough, but this self-ascription of a goodness beyond altruism is a very potent political tool.

The God of the civil religion is not only rather “unitarian,” he is also on the austere side, much more related to order, law, and right than to salvation and love. Even though he is somewhat deist in cast, he is by no means simply a watchmaker God. He is actively interested and involved in history, with a special concern for America.

By 1981, Bellah’s writing had so captivated sociologists that divergent strands of civil-religion theory were threatening to ruin the concept altogether. Gail Gehrig, writing in The Journal for the Scientific Study of Religion, gives an overview of the intervening years and suggests some reconstitutive principles, mainly that civil religion is what makes simply “being American” a quasi-magical state, a profound view of one’s significance in the world. Civil religion also presents a benign alternative to both the ferocity of politics and the fervor of spirituality, and as such appeals to the “everyday” American. It absolves without consuming, and directs with commanding.

Gehrig mentions an important question: can civil religion persist indefinitely, or will it always culminate in either a fully secular or full religious society? She cites Richard K. Fenn, who believed civil religion represented only a transitory state, and a dangerous one, that turned democratic processes into rituals and threatened to turn citizens into zealots.

21 years later, Michael Angrosino writes of “Civil Religion Redux” in the wake of the 9/11 attacks. He tells us the concept fluctuated with American scandals and defeats such as the Vietnam War, but was brought back with gusto in 2001. Religious theorists who suggested that 9/11 was evidence that God had “withdrawn his protective shield in anger at America’s moral lapses” were strongly rejected. Instead, Americans found unity in the civil-religious principles outlined above.

This unity makes possible those American “humanitarian aid” interferences overseas, where the US military is seen as an undeniable good, fending off wicked dictators according to a moral imperative. Angrosino’s example is the bombing of Yugoslavia under Clinton, but readers can fill in their own preferred instances.

Civil Religion in America
By: Robert N. Bellah
Daedalus, Vol. 96, No. 1, Religion in America (Winter, 1967), pp. 1-21
Published by: MIT Press on behalf of American Academy of Arts & Sciences
The American Civil Religion Debate: A Source for Theory Construction
By: Gail Gehrig
Journal for the Scientific Study of Religion, Vol. 20, No. 1 (Mar., 1981), pp. 51-63
Published by: Wiley on behalf of Society for the Scientific Study of Religion
Civil Religion Redux
By: Michael Angrosino
Anthropological Quarterly, Vol. 75, No. 2 (Spring, 2002), pp. 239-267
Published by: George Washington University Institute for Ethnographic Research 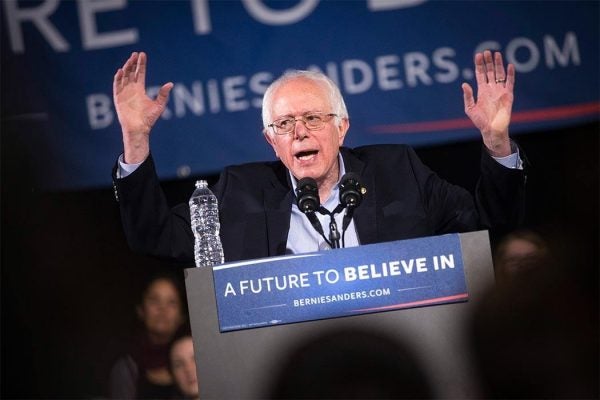 If Inequality Is the Question, Is Social Democracy the Answer?

How do social democratic ideas work in other countries? And would those same policies reduce the wealth gap in the U.S.?