Better known by the pen name Mourning Dove, Quintasket was a leader and activist who used her position as a public intellectual to fight for Colville rights. 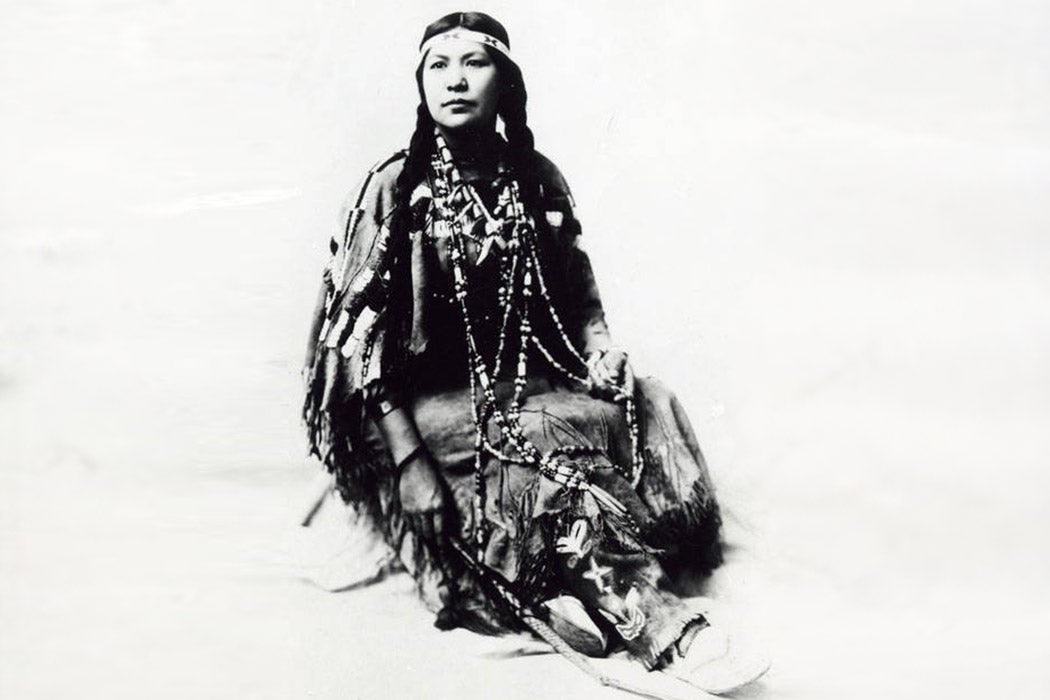 Christine Quintasket (c. 1888–1936) used many different names over the course of her life: Christine Galler, Mrs. Fred Galler, Christal MacLeod, Humishuma, and—most famously—Mourning Dove, the pseudonym under which she published Cogewea: The Half Blood, one of the first published novels by a Native American woman (1927), and Coyote Stories, a collection of ancestral tales (1933). But according to historian Laurie Arnold, it’s the surname Quintasket that situates her “as a member of her Colville community; as someone who held multiple roles within that community, including those of daughter, sister, and leader; and as someone who maintained commitments in addition to those of Mourning Dove’s.”

A member of the Colville (Okanogan) Tribe, Quintasket was born at a time when the US government was increasing pressure on Indigenous peoples in the Pacific Northwest. The traditional territories of the twelve Colville bands included some 39 million acres on the Columbia Plateau (southeastern British Columbia, eastern Washington, northeastern Oregon, northern Idaho, and western Montana). In 1872, US President Grant used an executive order to create the Colville Indian Reservation in northeastern Washington (ignoring the traditional lands across the Canadian border). Just a few months later, he reduced the reservation’s size to meet the demands for land by white settlers. In 1891, a contested land deal carved off another 1.5 million acres, removing the North Half, which included the Quintasket family allotments, from tribal control. As Arnold explains, “The legacy of that loss still impacts Colvilles today, and recovery of that land base motivated much of Quintasket’s political activism.”

The US government hoped the Colville peoples would become farmers (ignoring their convention of practicing the “seasonal round,” migrating throughout the year to fish, hunt, harvest berries, and dig roots on different parts of the plateau), but much of the reservation wasn’t suitable for farming. Subsequently, the Colvilles were forced “to participate in the wage labor economy, hiring on as seasonal hands on farms and ranches or as housekeepers for non-Indians living adjacent to the reservation.” Quintasket, too, would become a seasonal worker as an adult, dealing with labor insecurity even after becoming a published author.

As a child, Quintasket was trained “in the ancestral ways,” but her mother, Lucy Stuikin, wanted her to “obtain formal Western education and Catholic religious training.” Like many in her community, she “needed to be bicultural in order to maintain Native community ties and to control their participation in a Western world that was trying to overtake and assimilate them.”

One of the most important outcomes of her creative work was the authority it gave her as she tried to support her community.

At her mother’s insistence, Quintasket attended mission schools, where “she strived to adopt the cultural practices of non-Indians and to fulfill the institution’s academic and social expectations.”

In 1909, still a young adult, Quintasket began working on Cogewea. Much has been written about her career as author, from analyses of the effects of poverty on her creative work and output and her relations to Modernism to the importance of kinship and her editorial relationship with Lucullus McWhorter. But according to Arnold, one of the most important outcomes of her creative work was the authority it gave her as she tried to support her community.

“In the course of her research and travels, Quintasket learned about the various kinds of challenges and discrimination Colvilles faced living and working among non-Indian people,” writes Arnold. Her “engagement as a public intellectual engendered a self-confidence that allowed her to challenge the status quo when she encountered such situations.” She capitalized on her reputation to call for change.

For example, two years after the publication of Cogewea, Quintasket challenged the owners of the Biles-Coleman Lumber Company in Omak, a town on the western edge of the reservation, on their “bias against Indian labor.” Her advocacy was particularly important during the Great Depression, “when people on the Colville Reservation were as anxious for work as the rest of the country.” Similarly, in 1933, as a founding member of the Colville Indian Association (CIA), she discovered that only non-Indians were being hired as foreman of the Indian division of the Civilian Conservation Corps, which had been formed to bring economic relief to the reservation. She pledged to seek action and change that situation.

But even more important was her activism in relation to the 1934 Indian Reorganization Act (IRA), which required a vote by (federally recognized) tribes to participate in the restructuring program. Supporters of the IRA argued that it would restore and expand reservation lands, protect existing lands from future sale, and return management of tribal resources to the bands. Quintasket backed the IRA, believing it would prevent the further erosion of reservation resources. “In addition,” explains Arnold, “as one who struggled to pay the property taxes on her allotments, adoption of the IRA would have safeguarded those lands and eliminated her fear of losing them.”

The IRA was rejected by the Colvilles. The voting process remains a point of contention, and Quintasket believed the Colville bands had been the target of a propaganda campaign “aimed at instilling fear of displacement and loss of Indian status…should they adopt the legislation.” However, “the leadership Quintasket exhibited during the IRA debates and vote combined with her traditional upbringing, her leadership in the CIA, and the prominence of her cultural work” led to her election as tribal chair in May 1935.

Through it all, Quintasket remained dedicated to her writing, giving public talks about it and developing new projects. While it’s this body of work that keeps “Mourning Dove” on college syllabi and a subject of scholarly analysis, Quintasket’s willingness to work on the behalf of the Colville people was her greatest gift to future generations.

The story of the 1890 massacre was often about the end of Native American resistance to US expansion. But that’s not how everyone told it.