Remembering Carrie Fisher: Actress, writer, and so much more. 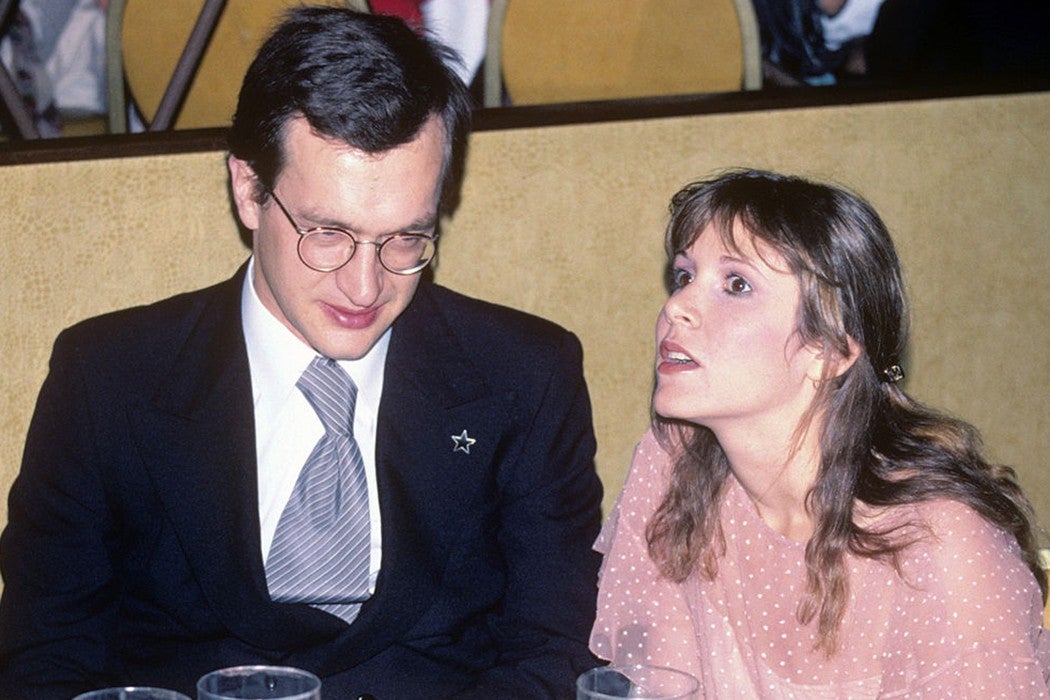 Carrie Fisher—actress, author, screenwriter, mental health activist, mother, dog-lover, and fearsome tweeter—has died at age 60. In a dramatic twist right out of the movies, her mother, the film legend Debbie Reynolds, died the next day, reportedly saying “I want to be with Carrie.”

Amid the tributes from fans of Princess Leia have been reminders that Fisher was equally notable for her gimlet-eyed takes on life as Hollywood royalty. Born to “America’s Sweethearts” Debbie Reynolds and crooner Eddie Fisher, Carrie Fisher knew the industry from the inside out, and worked her whole life to speak about it in her own terms.

Among Fisher’s many works is Postcards From the Edge, featuring a Hollywood actress with a famous mother, who, much like Fisher herself, battles addiction and depression. The film scholar Amy Lawrence examines how the Postcards from the Edge (both the novel and the film, which Fisher also wrote) offers “critiques of the system from within,” noting that the novel “begins in an epistolary form, with vivid letters from Suzanne to her family during her stay in rehab.” Suzanne’s narrative voice is honest and brash; Lawrence describes it as “strong” and “sassy.” Suzanne is an actress ready to tell it like it is, in her own words.

In Postcards from the Edge no one declares war. A classic ‘post-feminist’ work, it is all-out surrender.

But Hollywood is not known for giving women a chance to speak. Lawrence notes that in classic cinema a “woman’s natural ability to speak is interrupted, made difficult, or conditioned to a suffocating degree by sound technology itself,” and that the recording process separates a woman’s body from her voice. Just look at the canonical 1950s studio-era musical, Singin’ in the Rain, in which a silent film star needs a voice-double. The young singer who provides the disembodied voice (though her dance-heavy role in Singin’ in the Rain involves incredible physical feats) is of course Debbie Reynolds, Carrie Fisher’s mother. As Lawrence points out, “the relationship between women and their voices becomes the staging ground upon which attitudes toward the industry are expressed.”

Carrie Fisher had not only grown up with a famous mother, but had played an iconic big-screen heroine and gone through the industry wringer by the time she wrote her somewhat cynical roman à clef. In Postcards From the Edge, “Suzanne’s Hollywood is persistently revealed to be a false front. The opening scene turns out to be a shot from a film within the film… But on the whole it is a benign artifice—like the make-up on her mother’s face.”

Much of the novel involves the fraught relationship between the legendary mother and the struggling daughter, and Lawrence points out that many of their conversations include overlapping comments and muttered asides. These women speak, but do they hear each other? “Despite the nature of the industry and the personal toll it takes on women, work is work. When Suzanne wants to quit— ‘I’m getting out of the business. If I don’t I’ll never have any kind of a chance at having a normal life’—her mother cuts her off.” Lawrence concludes, “In Postcards from the Edge no one declares war. A classic ‘post-feminist’ work, it is all-out surrender. And there is no getting out of the business.”

Does Suzanne have her own voice? Does her mother? One thing is for sure: Carrie Fisher had a voice, and it stays with us, loud and clear.

The Revelatory Rabbits of Watership Down

On Christmas Eve we lost Richard Adams, the British writer whose 1972 novel Watership Down became one of the bestselling children’s books of all time.