Bombs and the Bikini Atoll

The haute beachwear known as the bikini was named after a string of islands turned into a nuclear wasteland by atomic bomb testing. 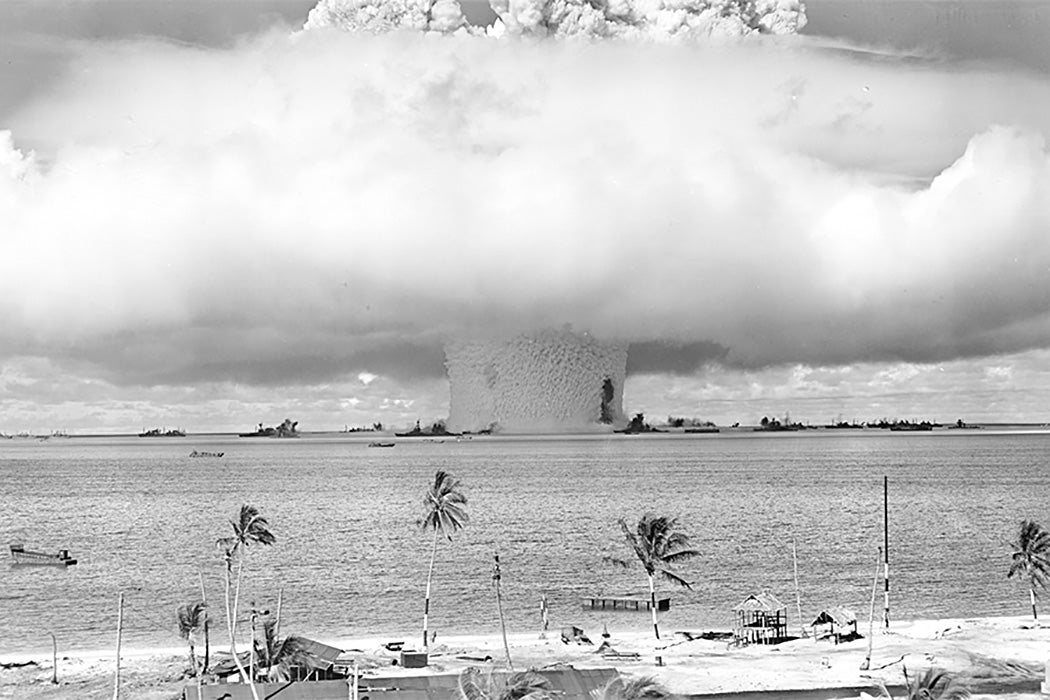 The Bikini Atoll—a series of limestone formations in the Pacific Ocean that comprise part of the Marshall Islands—is, or rather was, a tropical paradise. Between 1946 and 1958, the United States military detonated several nuclear bombs in the area, wiping out plants and wildlife, and leaving behind a toxic wasteland. That tumultuous history is now preserved in haunting photos, diaries, papers and studies, assembled by the University of Washington into the Lauren L. Donaldson Collection of Northern Pacific Ocean Radiological Surveys. These photos and documents are now free to browse on JSTOR.

The colonial history of the Bikini Atoll and the Marshall Islands is somewhat shorter than many other tropical nations. The first Christian missionaries arrived on the islands in 1857, the German traders in the 1860s, and the Japanese in 1914. Yet, up until the 1940s, the Bikinians remained relatively isolated. That changed in 1945, when the USA took over and designated the Marshall Islands for nuclear testing. The atoll inhabitants were forced to move.

As soon as the islands emerged and became habitable—around 3,500 years ago—humans began settling them. The explosions took minutes to destroy them.

On March 7, 1946, the 167 Bikinians living on the atoll placed flowers on their ancestors’ graves, bade them farewell, and left their homeland for good. They were initially relocated to the Rongerik Atoll, which they believed to be inhabited by evil spirits; after much hardship they were relocated once again to the Kwajalein Atoll and later to the Kili Island. On 1 July 1946, over 42,000 US military personnel and civilians on 242 naval ships, 156 planes and with 25,000 radiation recording devices watched the first Bikini Atoll nuclear test. Back then it was grandiosely described as a “terrifying pillar of water topped by an unfolding blossom of mist and radioactive debris.” About 5,400 experimental rats, goats, and pigs were brought along to study as part of the test program.

Four days after the initial test, Micheline Bernardini, a dancer from the Casino de Paris sported le bikini at the city’s public pool—a G-string with newspaper print. The name quickly made it into the fashion lexicon, despite the damage done to its namesake island chain.

More explosions followed the first ones in 1946. Exploding bombs chewed out huge craters in the coral reefs—craters more than a mile in diameter. Eventually, in March 1954 the US military dropped the world’s first hydrogen bomb from a plane, which decimated three of the Bikini islands, creating a crater that measured two kilometers wide and 80 meters deep. Built over millions of years by living coral organisms that grew around the basalt core, the islands comprised a complex ecosystem that took a very long time to form. As soon as the islands emerged and became habitable—around 3,500 years ago—humans began settling them. The explosions took minutes to destroy them.

While the physical devastation was easy to see, the long-lasting radioactive damage would take decades to observe. Years after the explosions, scientists continued studying the radiation effects on the atoll’s flora and fauna. They combed the atoll’s beaches for rats, crabs, and birds. They noticed that the giant Tridacna clams were gone from the area they inhabited before. They documented a variety of findings over time—a possibly mutated arrowroot plant and abnormally growing morning glory flowers, which they compared to the typically growing ones. The team also took surveys and documented radioactivity levels around the islands and in the marine wildlife, with a number of photographs in the University of Washington collection depicting scientists taking radiation readings from coconut crabs, and holding Geiger devices to the creatures fished out from the sea. The images of this collection are absurd—in one shot it looks like a scientist is interviewing a crab—and tragic.

Reclamation and clean-up procedures followed, and in 1968 President Lyndon Johnson promised 540 Bikinians living on Kili and other islands that they would be able to return to their ancestral home. But 10 years later, 139 repatriated Bikinians had to be evacuated from the atoll when tests showed that they had high radiation levels in their bodies. In 2016, a group of Columbia University researchers still deemed the Bikini Atoll’s radiation levels too high above the safety standards for residents to return.

While the rest of the Marshall Islands involved in nuclear testing have been finally deemed habitable, the Bikini Atoll alone was not. And that perhaps is the biggest irony in the islands’ colonial history. The word Bikini translates from its original Marshallese “Pikinni” as “the lands of many coconuts” where Pik means “surface” and Ni stands for “coconut.” The image of the endless palm trees rising against the backdrop of the tropical sun setting into the azure waters is a perfect picture of pristine nature and utmost peace—the very antithesis of what the Bikini Atoll became.

Browse the photos, diaries, papers and studies in the Lauren L. Donaldson Collection of Northern Pacific Ocean Radiological Surveys for free on JSTOR. 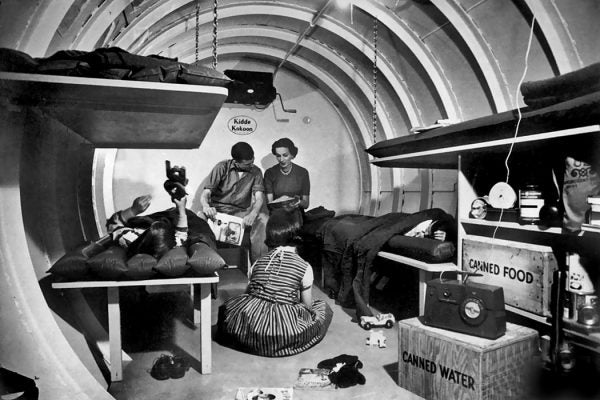 In the 1950s and 1960s, families planning for the apocalypse often took a homespun approach.