Herbert Keightley Job’s work represents a major turn in the study of birds. Instead of shooting them, he photographed them, at least some of the time… 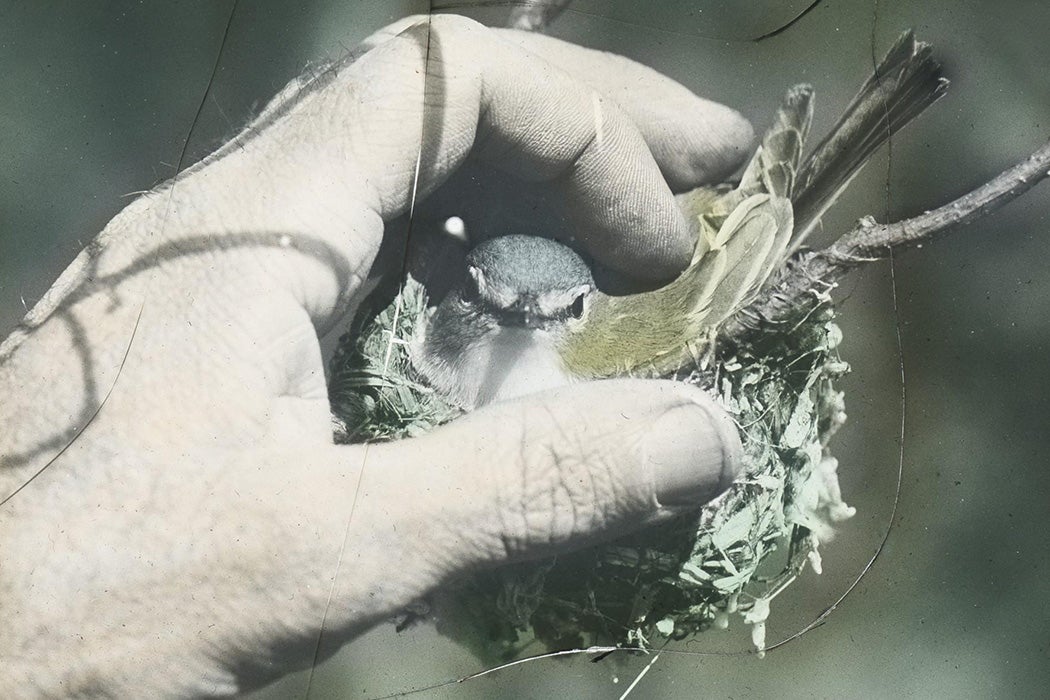 Early ornithologists relied on dead birds to do their research. John James Audubon (1785-1851), for instance, wasn’t happy if he shot less than a hundred birds a day. But by the turn of the twentieth century, ornithologists had new tools: better optics—the pioneering American field guide was Birds Through An Opera Glass (1890) by Florence Merriam—and cameras.

They also had a more conservationist-orientated mindset. Instead of killing birds, they thought, why not…watch them?

Trained as a Protestant minister, Herbert K. Job (1864-1933) taught ornithology at Connecticut’s state agricultural college from 1908 to 1924. As an avid conservationist, he worked for the National Audubon Society and also served as South Carolina’s Director of Conservation. His friendship with Teddy Roosevelt contributed to the latter’s setting up of the Key West National Wildlife Refuge. (The Library of Congress has rare movie footage Job took of Roosevelt in Louisiana in 1915.)

Job also took a lot of photographs on his expeditions into the field.

The Trinity College Ornithology Lantern Slides collection is made up of 770 hand-tinted glass plate slides. A sandwich of two thin pieces of 3.25 x 4-inch glass, which contain the emulsion and tints within, these were originally used in lantern slide projectors. Today, these slides have been digitalized and anyone with access to an internet connection can see them.

Here are some highlights. Click on the photos below to see the full collection in all its glory.

The photographer’s hand in this slide gives a sense of scale and shows how intimate ornithology can be. Vireos, like most songbirds, make nests that are just big enough to fit their bodies. Note how the nest has been camouflaged with bits of lichen, which helps the nest blend into the branch.

How did Job got this picture? Arctic Terns are notorious for aggressively defending their nesting sites. Those in the know wear helmets, since the birds will smack into the highest point of their targets. The terns also defecate on interlopers, just to show who is boss.

When not being ferociously territorial over their nesting sites, Arctic Terns are epic fliers. They have one of the longest migration routes on the planet, from the Arctic to Antarctica, and travel about 25,000 miles each year. The oldest known Arctic Tern was at least 34 years old when it was recaptured during a banding operation in Maine.

As adults, long-winged Northern Harriers, as Marsh Hawks are now called, hover over marsh and prairie in search of prey below. As gawky nestlings, they’re pretty defenseless and incredibly hungry.

Like many shorebirds, Black Skimmers nest colonially. Unlike other shorebirds, they hunt by flying just above the water with their long lower mandibles skimming through the water. When they feel a fish, their jaws snap shut. This makes them great night-foragers—they don’t need to see their prey.

Egg-collecting used to be a hobby. Collectors would compete for the rarest eggs, which meant rare breeding birds were threatened by their activities. Egging is now illegal in the U.S., thanks to the Migratory Bird Act of 1918—which made it unlawful to kill or sell most species of birds. Theoretically it put an end to pot hunting, egg-collecting, and, especially, the heedless slaughter of plumed birds for fashion.

Not something you see everyday. Swifts spend most of their lives in the air. They can’t perch like songbirds, as this clinging-by-its-claws youngster demonstrates. Almost entirely dependent on human structures for nesting, the Chimney Swift population has plummeted as industrial chimneys fall into disrepair and home fireplace chimneys are covered over.

Great Blue Herons are stately, majestic, and just a little dinosaur-like. Grabbing or impaling prey, these large herons can swallow surprisingly large fish whole. They tend to nest in groups, known as heronries, which they return to for decades, as long as the trees are still there.

One of the big concerns in birding today is the harassment of owls, who, unlike most other birds, rest during the day. Getting this close to an owl chick for a photograph would be frowned upon today. Luckily, telephoto lens have come an extremely long way in the last century. (Contemporary ornithologists need permits to get into nests, and to band and otherwise handle young and old birds alike.)

In the fall, Broad-winged Hawks migrate from the eastern half of North American to northern South America. They fly an average of 4,350 miles, 69 miles a day. As many as two million fly over Vera Cruz, Mexico each fall in “the river of raptors.” In the spring, they return back to North America to breed.