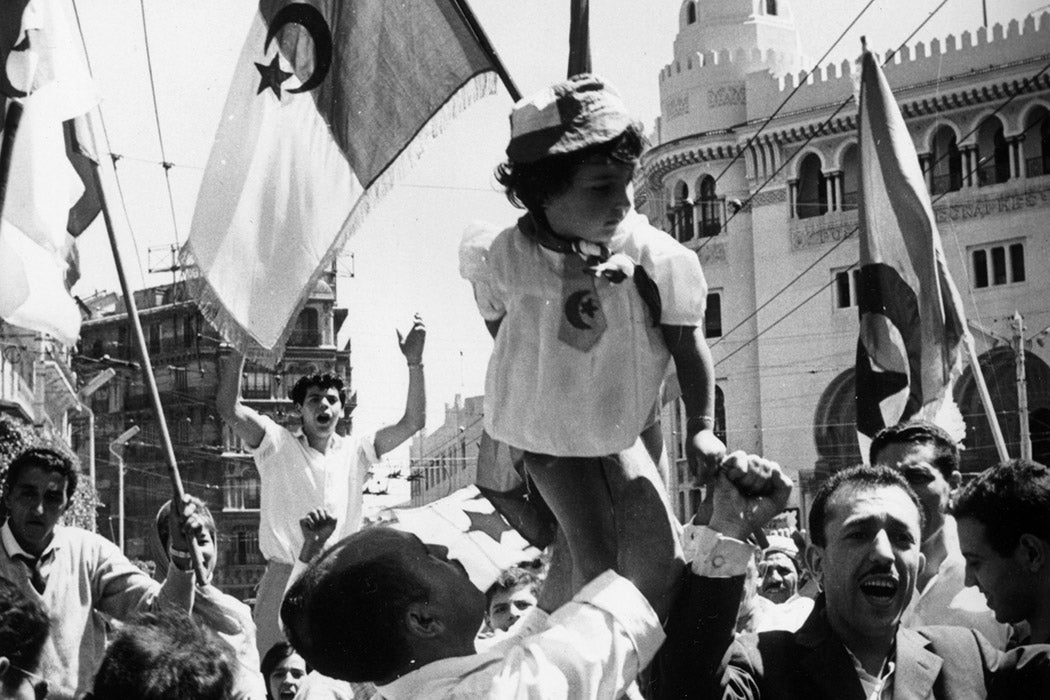 On July 5, 1962, Algeria—the country that is today the largest in Africa and the central country in the area of North Africa known as the Maghrib—celebrated the end of a seven-and-a-half-year-long war for its independence. At the time, the struggle was well known to the outside world. It had been the subject of Italian filmmaker Gillo Pontecorvo’s 1966 film “The Battle of Algiers.” Heroes such as Djamila Bouhired—the central character of the 1958 film by Egyptian film-maker Youssef Chahine —and real-world spokespeople such as Frantz Fanon were equally familiar to those abroad. One of the aims of the National Liberation Front (FLN), the group that had launched the Algerian Revolution on November 1, 1954, had been to internationalize the conflict, inscribe it in the context of the Cold War to gain support in the Eastern Bloc, and bring the case up for discussion at the United Nations so that France would lose support for its occupation. In this regard, the Algerian War was a success.

The Evian agreements of March 18, 1962 and the cease-fire they instituted, ended the war between the French army and the Algerian National Liberation Army (ALN) and began a “transitional period,” which ended with the referendum of self-determination on July 1, 1962. The resounding “yes” vote led to the transfer of sovereignty from the French to the Algerian authorities on July, 3 and to the official celebration of Independence on July 5. The date of July 5th had been deliberately chosen by the Algerian provisional Government as a historical reference to July 5, 1830, when the city of Algiers had surrendered to the French occupiers: it thus marked 1962 as a reversal of French occupation, which had lasted for 132 years. A few days after the founding of the People’s Democratic Republic of Algeria, in September, Ahmed Ben Bella—its soon to be first president—declared that colonization had been “an accident in history,” and that Independence thus closed a digression, or a parenthesis, in the country’s history.

This timing of the accession to Independence meant that the French authorities were no longer (officially) present when the Algerians finally celebrated their newly gained freedom. The festivities were photogenic: many journalists photographed or filmed them, in the capital city, Algiers, and to a lesser extent in the rest of the country. According to many witnesses whom I interviewed for my book, Algérie, 1962, the Algerian authorities tried discouraging festivities from beginning before July 5, with very limited success. Many witnesses remember several days of festivities during which, they say, “even the women didn’t come back for the night” and during which revellers sometimes hopped onto a truck — lost in singing and chanting — and before they realized it, found themselves in cities far from home. Historian Ouarda Siari-Tengour insists that parties went on, almost without interruption, from the cease-fire of March 19 to the summer.

Celebrations for the return of a child, a father, a sister, or of a neighbor often alternated in rapid succession with occasions for bereavement and mourning.

However, the celebrations were not entirely joyous, but contained a share of mourning and sadness. After the ceasefire, Algerian families began reuniting as combatants demobilized and left the maquis—the areas in which they had been fighting—or as political prisoners were freed from French prisons or detention camps and returned to their regions of origin. Their return was always an opportunity to celebrate; but those who returned were often bearers of bad news about other combatants or activists who had been killed during the war. Celebrations for the return of a child, a father, a sister, or of a neighbor often alternated in rapid succession with occasions for bereavement and mourning, and the invention of rituals performed in the absence of a body.

During the festivities, collective bereavement was expressed even with crowds marching together with their index fingers pointing towards the sky, in a gesture that, for Muslims, expresses the belief in the oneness of God. While everyone remembers some of the more joyous slogans of the time (“Tahiya al-Jazair!”, “Long live Algeria!”), they also sang: “May God have mercy on the martyrs,” thus expressing the massive collective mourning of those who died during war.

The process of ending the war and ending colonization was far from peaceful. In a colony where 10 % of the total population had been composed of French men and women (known as the “pieds-noirs”) who were accustomed to benefiting from superior rights to those of the native Algerian population, the approach of Independence and the promise of a Republic based on equal rights caused considerable anxiety. The cease-fire and the unavoidable approach of Independence fueled the violence of the pro-French Algeria Organisation Armée Secrète (OAS). The OAS aimed to derail the process of independence by launching last-ditch waves of violence against Algerians, as well as against the French who chose to leave the country and were accused of treason. By increasing the level of chaos, the OAS paradoxically accelerated the breakdown of French Algeria and the rapid departure of the French. Of the million pieds-noirs living in the country at the end of the war, 650,000 left the country in 1962 alone. In France, this exodus is the best-known aspect of the history of Algerian Independence, since most of them resettled in France. Their story is of course a tragic one of displacement and loss of the country in which most of them were born. Several associations in France today continue to promote this tragic vision of Algerian Independence.

In cities where the European population had been the largest, such as Algiers ( which became the capital in1962) or Oran, in the west of the country, OAS violence besieged Algerian neighborhoods with snipers and mortar shells. William Porter, the American consul to Algeria as well as the Swiss International Committee of the Red-Cross who visited these neighborhoods were appalled at the level of violence.

Violence and chaos also developed in the interstice between the two sovereignties. As the French army slowly retreated, Algerian locals and informal authorities formed under the leadership of the handfuls of combatants who had survived the end of the war inside the country. Forms of banditry appeared, as well as kidnappings and revengeful violence against those who were—rightly or wrongly—accused of having worked for the French army, or supporting French occupation. Such violence in particular against these so-called harkis, Algerian auxiliaries of the French Army, led many to leave Algeria for France.

Despite this new form of violence, the transitional period from the cease-fire in March to Independence in July marked the end of the war, and created opportunities for many of those who had supported the anticolonialist cause to travel to the country. American or British students, volunteers of NGOs, Lebanese, or Egyptian communists, and French anticolonialists could finally travel to Algeria to see it with their own eyes.

Algeria’s attractiveness for revolutionaries and activists did not begin with Independence: Even while it was waging its war for Independence, the FLN supported other Independence struggles. African leaders such as South-African Nelson Mandela or Angolese Mario de Andrade had trained on the FLN bases in Oujda, Morocco, at the beginning of 1962. Upon his liberation, in 1990, one of Mandela’s very first trips abroad included Algeria as a celebration of this link. Struggles in the rest of the world resonated with the Algerians too: during the celebrations of July 1962, various slogans referenced independent states yet to come, such as that of Mozambique, Angola, or Palestine. Cuba’s support of the Algerian Revolution eventually developed into technical assistance when the country sent its first medical brigade to Algeria in 1963. Algiers was progressively transforming into the Mecca of revolutionaries that it would represent in the 1960s and 1970s.

Not only did activists long to visit a country that was becoming a model for anticolonial struggles, but many also came to contribute to its success. In addition to being a cause célèbre of anticolonialism, Algeria became a land of experiments in socialism and self-management. In the context of the Cold War and with the support given by the Eastern Bloc to the struggle against colonization, the FLN had strong socialist influences that were made more visible in the FLN platform adopted in June 1962 during a meeting in Tripoli (Libya).

The rapid departure of the French left many industrial companies as well as farms without owners or managers, allowing them to put into place some of the objectives sketched out in the FLN platform adopted in June 1962 during a meeting in Tripoli (Libya). The platform called for the country’s rapid industrialization as well as agrarian reform that would give ownership of the land to those who farm it. But in the spring of 1962, without waiting for a permanent Algerian government to be put into place, workers spontaneously self-organized for the harvests, and self-management committees were created. René Dumont, a French agronomist interested in questions of development, traveled to Algeria in December 1962 and January 1961 on a mission for the Algerian government to analyze the situation and make suggestions as to how this spontaneous self-management could develop. Algeria appeared as a country-wide spontaneous experimentation that the rest of the world could learn from.

Much of the research about Algeria’s first years of Independence was produced by men and women who had travelled to Algeria in this effervescent and utopian time. Sociologists and political scientists described agriculture, industrialization, socialism, and the transformations that were being tested on a national scale as experiences that would inspire the rest of the world. In contrast, several of their books, written after their departure from Algeria, are infused with nostalgia or disappointed that the country had not remained the land of utopias.

Later, in the 1980s and the 1990s, fewer foreign authors would write about Algeria and much of the work would focus on the rise of Islamism and the question of the reemergence of violence within Algerian society. In the meantime, many of the articles produced during the early, heady days of independence are so connected to this revolutionary and anticolonial fervor that they are often treated as primary sources documenting the moment of independence, when Algeria was the center of the world. 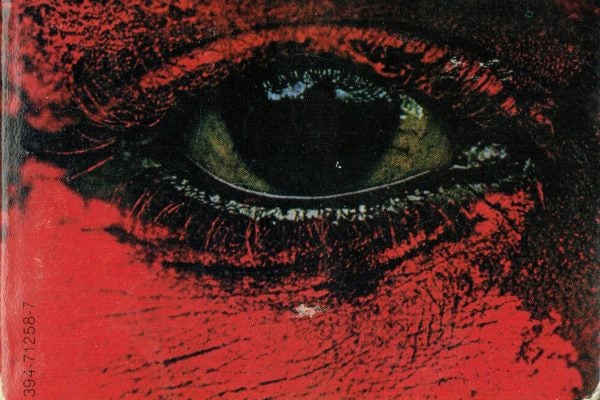 Resistance through Silence in Camus’s The Plague

"On this earth there are pestilences and there are victims, and it’s up to us, so far as possible, not to join forces with the pestilences."