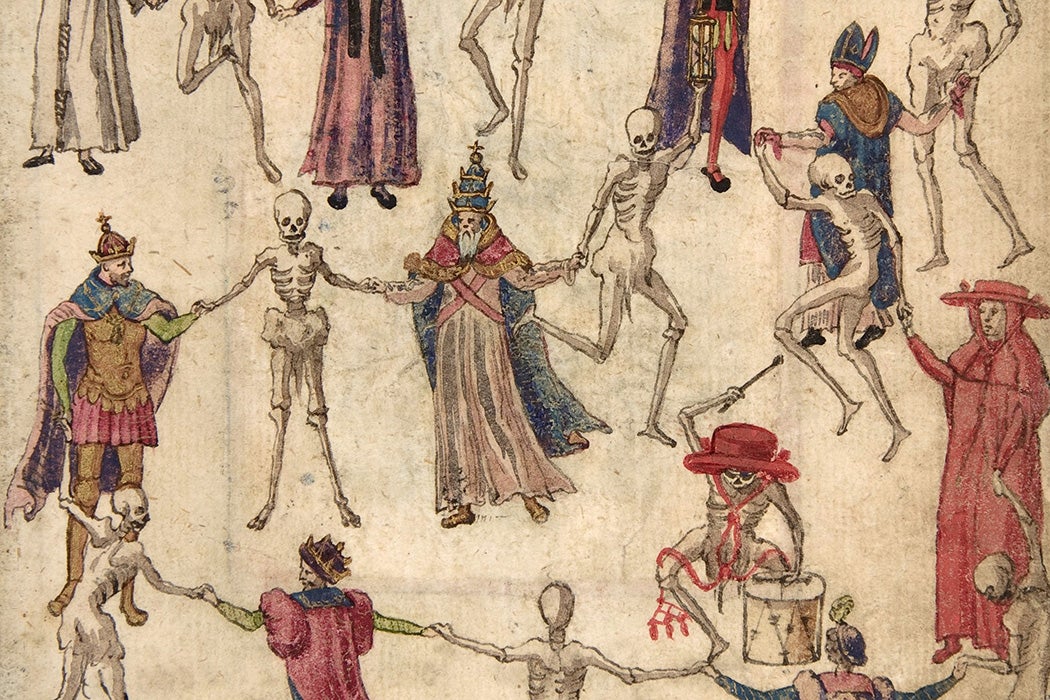 If you’re planning a Halloween party this month, you could take some tips from the Roman emperor Domitian. In 89 CE, he staged a banquet so spooky it left his guests fearing for their lives.

The banquet hall was painted black from ceiling to floor. By the pale flicker of grave lamps, the invited senators were able to make out a row of tombstones set before the dining couches—each inscribed with one of their names. Slave boys dressed as phantoms brought in courses on gleaming black dishes. They were piled with food, but not the lavish delicacies of an emperor’s table. Rather, Domitian served his guests the plain offerings traditionally given to the dead. The senators began to wonder if soon they would be dead themselves.

Domitian was participating—with extra flair—in a long-standing Roman banquet tradition, that of the “memento mori.”

After the dinner ended, the guests spent the whole night expecting summons for an execution to appear at any moment. Finally, in the morning, Domitian sent messengers to inform them that the gravestones (now revealed to be made of solid silver), the costly dishware, and the slave boys were being given to them as gifts.

In a certain sense, Domitian was participating—with extra flair—in a long-standing Roman banquet tradition, that of the “memento mori.” Larva convivalis, little bronze skeletons, were common dinner gifts. They served to remind guests to enjoy their fleeting pleasures, because death is always near. The little skeletons were made with jointed limbs, so they could join in the banquet festivities with a jiggling dance.

At least on the surface, it was all a harmless prank. The fact was, Domitian could easily have had his guests killed. Anyone could fall from imperial grace; Domitian had even executed his nephew and exiled his niece. Even after Domitian revealed that the gravestones were solid-silver treasures, their unspoken threat lingered in the air.

But the fact that the emperor had the power to deal out death at will did not mean he himself was safe. Domitian keenly felt the looming threat of assassination. He even had the gallery where he took his daily walk lined with moonstone polished to a mirror sheen, so that he could always watch his back.

Nor was Domitian the only emperor to delight in terrorizing his guests. According to Seneca, Caligula ordered the execution of a young man, then invited the man’s father to dinner the very same day. The man chatted and joked with the emperor, knowing that, if he showed the slightest sign of grief, Caligula would order the death of his other son.

Then there’s Elagabulus, whose biography is a veritable catalog of extreme pranks. He taunted his guests by serving them platters of faux food made from wax or wood or marble, while he feasted on real delicacies. Sometimes he served his guests paintings of meals, or napkins embroidered with pictures of the food he was eating. (Imagine walking away from a dinner with an empty stomach but loaded down with paintings of a Roman feast: flamingo tongues, peacock brains, combs cut from the heads of living roosters, etc.) Even when he served actual food, he delighted in mixing the edible and inedible, seasoning peas with gold nuggets, rice with pearls, and beans with glowing chips of amber.

Sometimes he would turn lions and leopards loose among his guests. The guests, not knowing the beasts were tame, would cower in terror: unrivaled dinner entertainment for Elagabulus. One minute you’re eating, the next you’re being eaten: what could be a better metaphor for the fickleness of power, for the instability that tormented paranoid Roman elites?

On the other hand, consider, also, the slave boys—first used as props in Domitian’s grim game, and then casually given away along with the dishes they carried. They lived under the same constant threat, but without the compensations of wealth and power. Their hands served the meal, raised the grain, slaughtered the animals, cooked the feast: the whole production rested on a vast edifice of forced labor.

Under Roman law, a slave was not considered to be properly a human being. But the “masters” must have known on some level that their “property” was not really theirs, that subservience and subordination were acts put on under duress. In theory, absolute power is invulnerable; in practice, the emperor is always looking over his shoulder for the assassins in the shadows.