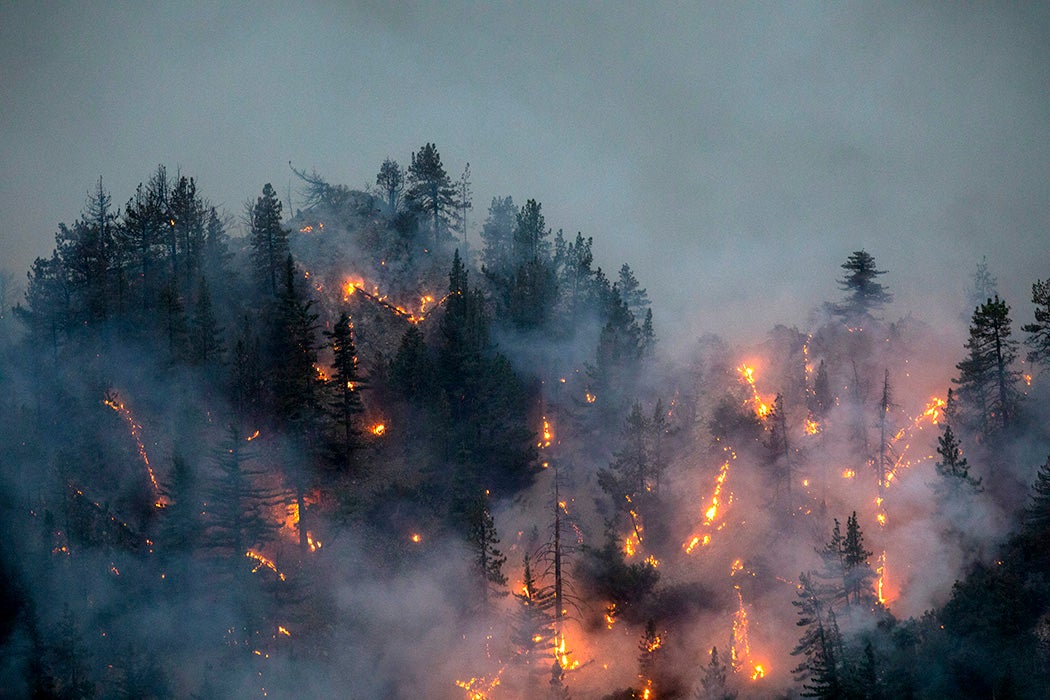 Have humans created an environment that encourages wildfires to blaze out of control? Definitely. But wildfires existed long before we did. Homo sapiens didn’t appear until 100,000 years ago; the fossil record shows that wildfires are much, much older.

As soon as there was terrestrial life, there was fire. A 2001 study from geologist Walter L. Cressler III describes fossilized charcoal uncovered in an ancient riverbed in north-central Pennsylvania, dating back to the Late Devonian Period. That’s over 360 million years ago—at that point, most fauna was still aquatic, and plants had only recently made the jump to dry land. There’s even evidence indicating that wildfires appeared as early as the Silurian Period (443 million years ago), when the most ambitious plant life was mosses and low-growing, primitive vascular plants.

“The origin of fire is tied to the origin of plants,” write fire ecologists Juli G. Pausas and Jon E. Keeley. “Before the appearance of photosynthetic organisms, the atmosphere lacked sufficient oxygen, and before the appearance of terrestrial plants, it lacked fuels; thus, fire did not exist on our planet.” These early photosynthetic plants pumped oxygen into the atmosphere. When atmospheric oxygen hits 13 percent, combustion becomes possible. (For reference, our current atmosphere is around 21 percent oxygen.)

Fires have “profoundly influenced the development of forests and their ecological relationships.”

Once you have the fuel, the next thing you need is a spark. Usually, lightning did the job. In addition, write Pausas and Keeley, less predictable sources might have included “volcanoes and sparks from rock falls or meteorite impact.”

In their most primal form, free from the influence of anthropogenic pollution and climate change, wildfires served an important ecological purpose. Over millions and millions of years, fires have “profoundly influenced the development of forests and their ecological relationships,” writes Pausas and Keeley. According to Cressler, they promote “dynamic ecosystems subject to cycles of disturbance and regeneration.” Some plants evolved to benefit from fire, where the intense heat will trigger seed germination. Ancient traits like resprouting came about in response to fire, as did the evolution of tree bark and the spread of flowering plants.

Eventually, of course, humans entered the scene. “Humans initiated a new stage in ecosystem fire, using it to make the Earth more suited to their lifestyle,” write Pausas and Keeley. “However, as human populations have expanded their use of fire, their actions have come to dominate some ecosystems and change natural processes in ways that threaten the sustainability of some landscapes.” Today, 90 percent of wildfires in the U.S. are caused by humans, and they tend to blaze longer, larger, and hotter than ever before.