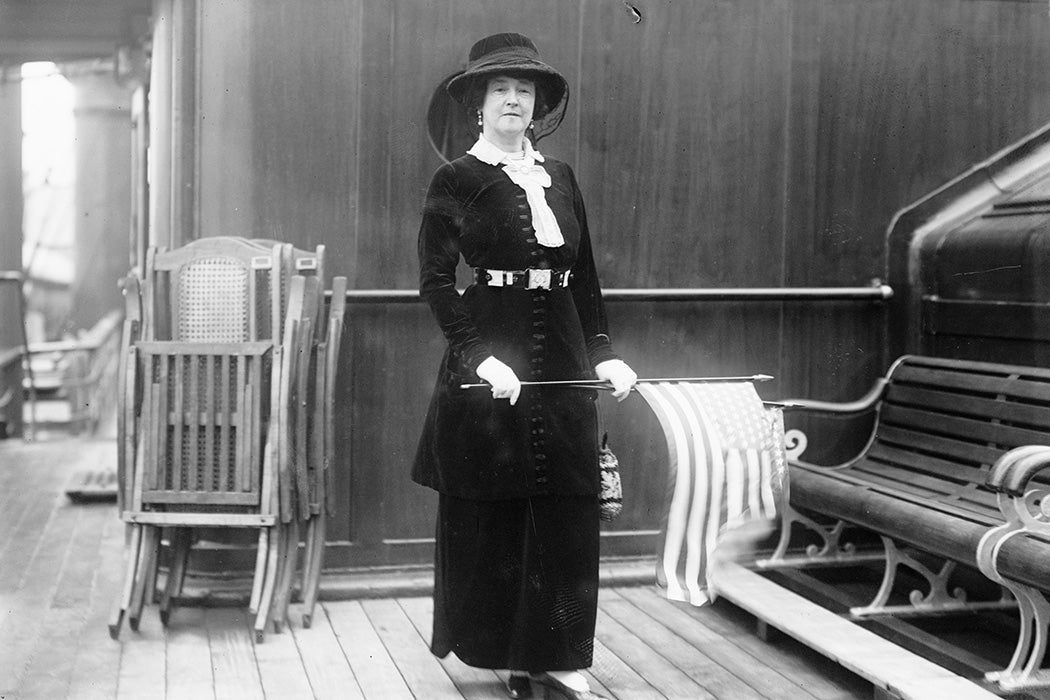 Modern shoppers can frame almost any purchase in moral terms. Think of all those people getting takeout to support local restaurants during the pandemic. As theater historian Marlis Schweitzer explains, one foremother of this attitude was British fashion designer Lucile, or Lady Duff Gordon. She promoted luxury consumption as a patriotic duty in the face of government-backed austerity campaigns during the First World War.

Schweitzer writes that Lucile claimed to be the inventor of the modern fashion show. Starting in 1900, she hired “glorious, goddess-like girls” to model her dresses at her London showroom, which she decked out like a theater. In 1910, she brought a branch of her fashion empire to New York. After the outbreak of World War I, she moved to the city herself.

Herbert Hoover, then head of the Wartime Food Administration, called for a “stamp of shame” on “wasteful eating, dressing and display of jewelry.”

When the United States entered the war, authorities adopted a rhetoric of sacrifice for the common good. “This is the time for America to correct her unpardonable fault of wastefulness and extravagance,” President Woodrow Wilson said in 1917. Herbert Hoover, then head of the Wartime Food Administration, called for a “stamp of shame” on “wasteful eating, dressing and display of jewelry.”

Lucile disagreed. She created a new, fantastically opulent show called Fleurette’s Dream, which she toured on the vaudeville circuit. However, Schweitzer writes, she insisted that this wasn’t a fashion show but a war drama. It tells the story of a young French girl dreaming of her former fashionable life in Paris while hiding in her cellar during a German bombing. Lucile grounded the display of extravagant furs and fabrics in the reality of war. A French military officer introduced the show’s debut performance. And Lucile promised that the majority of money raised by the show would go to helping suffering civilians in France.

Lucile wasn’t the only one arguing for spending money as an ethical choice. In June 1917, Theatre Magazine warned that if families stopped buying new clothes or going to restaurants and theaters, “such wide-spread distress would result in the business life of the community that no man can say what the outcome would be, and millions of innocent persons would suffer.”

In addition to raising money for a good cause and patriotically boosting the economy, Lucile’s message involved a growing ethos of self-help through consumerism. Schweitzer writes that she advocated for fashion as “a creative, productive process that enabled individual expression.”

In April 1918, Lucile spoke at a Pittsburgh Press Club dinner where Herbert Hoover was the guest of honor. Asked to comment on “economy in dress,” she boldly declared that she disagreed with the very concept. Instead, she later explained, “I went on to tell them that I thought it was the duty of every wife, sweetheart and mother to spend as much on dress as they could possibly afford in order to make the best of themselves for the sake of the men in the trenches.”