Who Wrote the Declaration of Independence?

The Second Continental Congress adopted the Declaration of Independence on July 4, 1776. Thomas Jefferson was not then credited with its authorship. 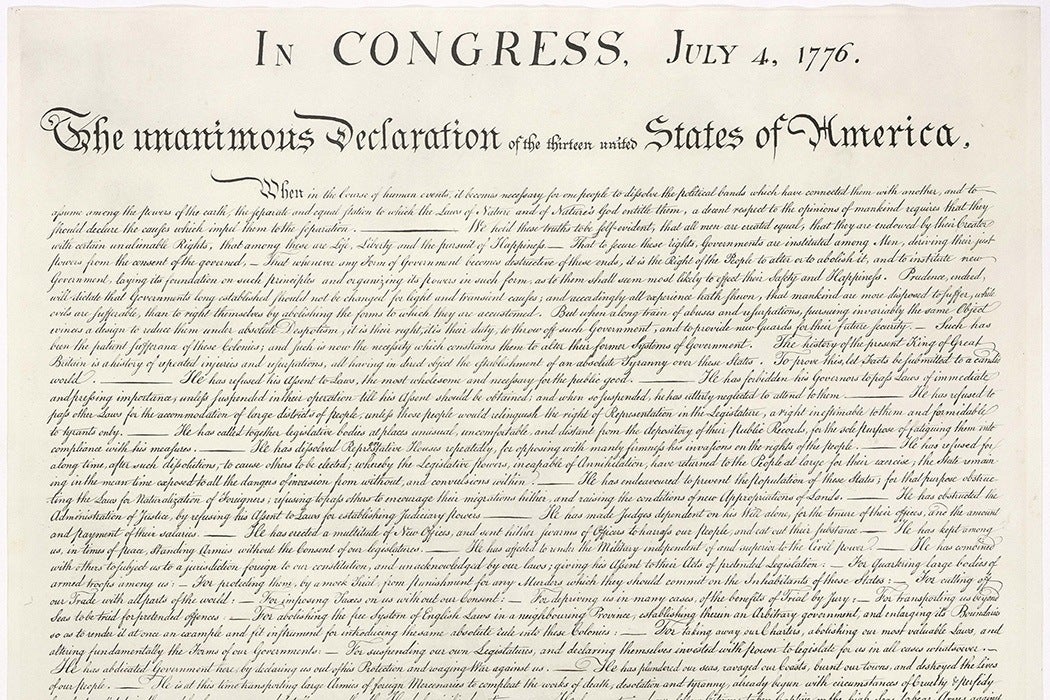 The Second Continental Congress adopted the Declaration of Independence on July 4, 1776. We now credit Thomas Jefferson with the Declaration’s authorship, but that was not the case on that momentous day, nor for a significant time afterwards.

The document was drafted by a committee made up of John Adams, Benjamin Franklin, Thomas Jefferson, Roger Sherman, and Robert Livingston. Jefferson, recognized for his ability with words, wrote the first draft; then it was edited by the others, and then edited again by the whole Congress. Fifty-six members of Congress signed it (one of them as late as November).

So how did Jefferson, “initially anonymous as the penman of the Declaration, gain renown as its author?” Robert M.S. McDonald answers his own question with this insightful exploration into the changing meanings of authorship and authority, and the changing political scene. Between 1776 and 1826, McDonald argues, the political usefulness of the Declaration “hinged on Americans’ initial ignorance and then gradual recognition of Jefferson’s authorship.”

Jefferson himself claimed that credit must go to Locke, Montesquieu, the Scottish Enlightenment, and the long struggle for English civil liberties.

During the Revolution, the Declaration was considered a statement of consensus collectively issued by the “unanimous” thirteen states. Committing an act of treason against the British Crown, the signers put down their names with courage and conviction: the document ends “we mutually pledge to each other our Lives, our Fortunes and our sacred Honor.” Its effectiveness came not from individual will, but from the “self-evidence of its arguments.”

But by the 1790s, the battle for independence had been won. The battle for the United States had begun: “The Declaration became a weapon of partisan warfare, and Jefferson’s fame as its creator gradually increased,” writes McDonald. John Adams, for one, was not pleased. He wondered in 1805 if there was “ever a coup de théâtre that had so great an effect as Jefferson’s penmanship of the Declaration of Independence?”

Jefferson himself wouldn’t embrace his status as the “scribe of independence” publicly until the last year of his life. This wasn’t false modesty; “sublimation of self” and political “disinterestedness” were 18th century givens. Recall that the Federalist Papers’ three authors all signed as “Publius,” and that the Constitution claimed authorship by “We, the People.” Self-promotion was a 19th-century innovation.

Jefferson and Adams would famously reconcile in their last years. Both died on July 4, 1826, the 50th anniversary of the Declaration. Talk about a coup de théâtre! So now we recognize Jefferson as the Declaration’s author, yet McDonald reminds us that Jefferson himself claimed there were no new ideas in it: credit too must go to Locke, Montesquieu, the Scottish Enlightenment, and the long struggle for English civil liberties, among other founts of liberty.

Thomas Jefferson's Changing Reputation as Author of the Declaration of Independence: The First Fifty Years
By: Robert M. S. McDonald
Journal of the Early Republic, Vol. 19, No. 2 (Summer, 1999), pp. 169-195
University of Pennsylvania Press on behalf of the Society for Historians of the Early American Republic

Related links to free scholarly context on JSTOR for the foundational document in American government.