Who Was the Little Girl in Las Meninas?

A Spanish princess who became a German queen, Margarita Teresa lived a life structured by Catholicism and cut short by consanguinity. 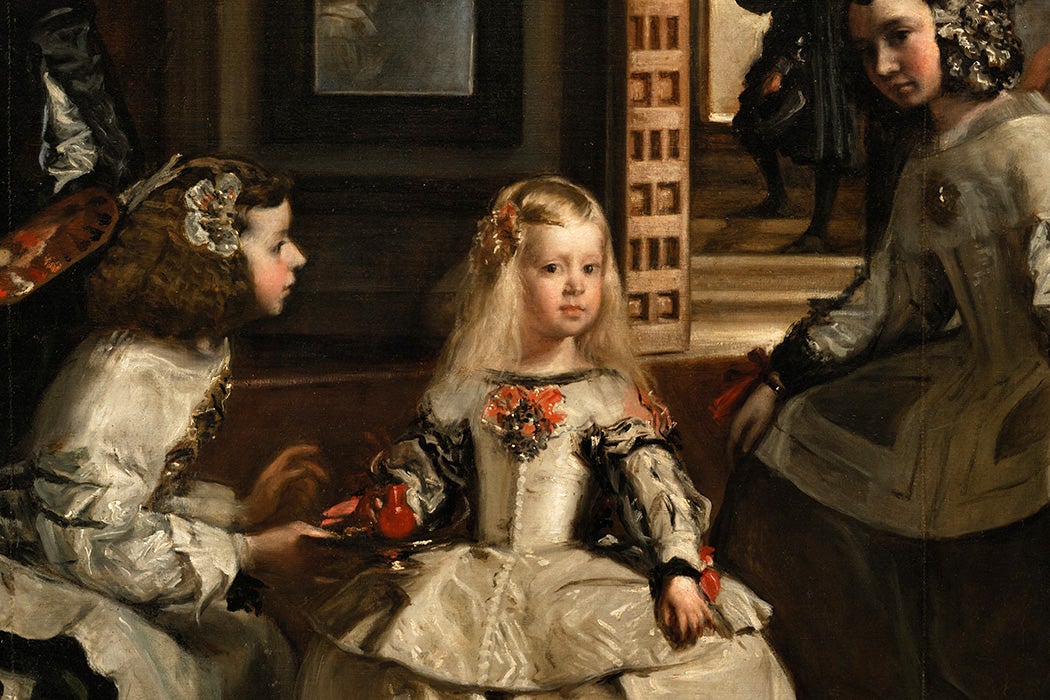 She is the illuminated center of one of the world’s most acclaimed and recognizable group portraits. Clad prettily in a wide-hipped, silver-and-black gown ornamented with rosettes and ribbons—the height of fashion in the seventeenth-century stretch of the Spanish Golden Age—a little girl looks out at the viewers with an expression of calm and confidence far beyond her years. That little girl, a dainty Spanish princess, would grow up into a headstrong German empress. Her life, tragically short, is little known, as art historians often overlook the main subject of Diego Velázquez’s 1656 masterpiece Las Meninas and focus instead on its techniques and symbolism. She was the Infanta Margarita (Margaret) Teresa of Spain (1651–1673), and she was the only daughter of Philip IV of Spain and his second wife, Marianna of Austria.

Margarita’s marriage to Leopold I of Austria, Holy Roman Emperor, in 1666 was one of the grandest celebrations of the European Baroque era, though many who’d taken note of the disastrous results of past Spanish-Hapsburg and Austrian-Hapsburg marriage alliances wouldn’t have seen a reason to celebrate. Leopold was his young bride’s maternal uncle by blood, and his request that she even address him as “uncle” is a particularly unsettling aspect of their relationship from an outsider’s point of view. The couple did get along well, sharing musical and artistic tastes. They produced four children, though only one would live past infancy.

She blamed her children’s deaths on the presence of Jews in Austria, believing God was punishing her for allowing them to live in her adopted kingdom.

As William O. McCogg, Jr. describes, Margarita blamed her children’s deaths on the presence of Jews in Austria, believing God was punishing her for allowing them to live in her adopted kingdom. She begged her uncle-husband to drive them out of Vienna, the capital city. Of course, Margarita was not the first Spanish princess to make such a request of her spouse. In 1497, Isabella of Aragon, the eldest daughter of Isabella I of Castile and Ferdinand II of Aragon, refused to wed Manuel I of Portugal unless he first expelled all the Jewish residents from his country.

As historian Stephen Haliczer relates, “Ferdinand and Isabella issued perhaps the most famous—or infamous—document of their reign: the edict for the expulsion of the Jews. This decree ordered the departure within three months of all Jews residing in their dominions, said Jews were not to return under pain of the most severe punishment.”

The Catholic faith organized the worldview of Spain’s royalty for generations, and it became especially deep-seated in its daughters, who drew inspiration from their notorious ancestor Isabella I, the mastermind behind the Spanish Inquisition. For Margarita, devotion to her religion was not just her life’s creed but her psychological compass. It ruled and dictated her thoughts and actions. She believed heresy in Austria—embodied in the Jewish people—had killed her children. Her anti-Jewish sentiments were backed by the Christian merchants of the city, notes McGogg, making it all the more pressing for Leopold to honor her demands. During the Corpus Christi festival of 1670, he ordered the expulsion from Vienna of all but the richest Jewish residents and called for the destruction of their synagogue.

It was a romantic gesture—by this dogmatic family’s standards—but ultimately a useless one. Margarita would soon join her children in the grave. Centuries of Hapsburg inbreeding had rendered her with a weak constitution ill-equipped for the trauma of successive pregnancies. As genetics scholars Gonzalo Álvarez and Francisco C. Ceballos outline, “As a consequence of the persistent consanguinity over generations, a number of Spanish and Austrian Hapsburgs presented extremely high inbreeding coefficients.”

Margarita’s own parents were uncle and niece by blood, and their other offspring (Margarita’s younger brother) would grow up into the famously sickly and physically handicapped Charles II of Spain, who gained the unfortunate nickname of “The Bewitched” (El Hechizado) thanks to his appearance. Margarita was healthier, but genetics were against her. She died on March 12, 1673, fatally weakened by a failed sixth pregnancy. She was only twenty-one years old.

From a historical perspective, it’s fortunate that Velázquez immortalized Margarita in Las Meninas, or her fate might have been that of a footnote in the European history textbooks. Las Meninas now hangs in the Museo del Prado in Madrid, the object of much scrutiny by art historians. Despite her hard heart, which places her reputation in dark territory, viewers of this painting and the several additional portraits Velázquez painted of her can do this unlucky princess the small kindness of knowing and remembering her name: Margarita Teresa.

Picturing Power: Representation and Las Meninas
By: Amy M. Schmitter
The Journal of Aesthetics and Art Criticism, Vol. 54, No. 3 (Summer, 1996), pp. 255–268
Wiley on behalf of The American Society for Aesthetics
The Castilian Urban Patriciate and the Jewish Expulsions of 1480–92
By: Stephen H. Haliczer
The American Historical Review, Vol. 78, No. 1 (Feb., 1973), pp. 35–62
Oxford University Press on behalf of the American Historical Association
Royal Inbreeding and the Extinction of Lineages of the Habsburg Dynasty
By: Gonzalo Álvarez and Francisco C. Ceballos
Human Heredity, Vol. 80, No. 2 (2015), pp. 62–68
S. Karger AG
Portraits of Charles II of Spain in British Collections
By: Eric Young
The Burlington Magazine, Vol. 126, No. 977 (August 1984), pp. 488–493
Burlington Magazine Publications Ltd.
Interpretation without Representation, or, the Viewing of Las Meninas
By: Svetlana Alpers
Representations, No. 1 (February 1983), pp. 30–42
University of California Press