Who Was Jesus’s Grandma?

Canonical scripture never mentions the parents of the Virgin Mary, but the body of St. Anne was vital to Christianity in the Middle Ages and Renaissance. 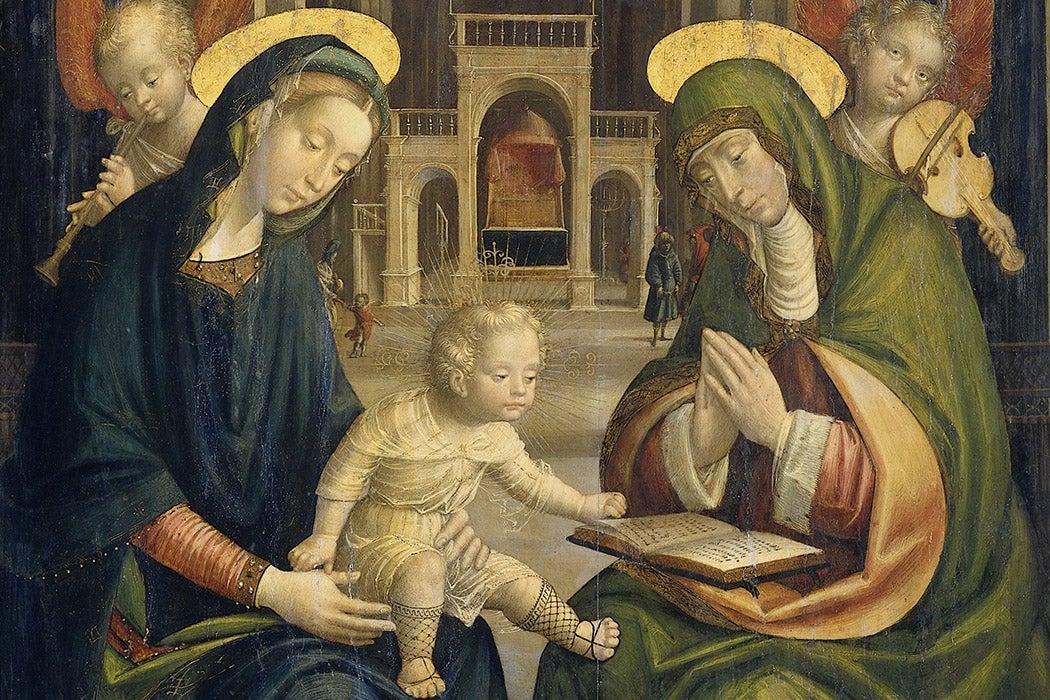 Look at a Christmas crèche, and you’ll find three figures: Mary, Joseph, and the baby Jesus. But, as Gender Studies scholar Catherine Lawless writes, in art of the Middle Ages and Renaissance, it was common to find a different family grouping: the Christ child with his mother and his grandmother, St. Anne.

Lawless writes that the canonical books of the Bible make no mention of the Virgin Mary’s parents. But Christian tradition, derived partially from apocryphal gospels, identified them as Joachim and Anne. Their story, well known by the thirteenth century, suggested that they were married but childless for twenty years, at which point they were miraculously rewarded with Mary’s birth.

Doctrine now holds that, unlike her daughter, Anne got pregnant in the usual fashion.

St. Anne’s position in Christianity was linked with the doctrine of the Immaculate Conception, a subject of much debate until 1854, when a papal bull made it an official Catholic belief. Essentially, the doctrine explains that Mary, unlike all other humans, was sinless from the moment of her conception, which made her capable of becoming the mother of God. However, the Church eventually clarified that Mary was not conceived merely through a kiss between her parents at the Golden Gate in Jerusalem, as some believers insisted. Doctrine now holds that, unlike her daughter, Anne got pregnant in the usual fashion.

As depicted in art, St. Anne didn’t just give birth to a sinless child. She supported her in raising the Son of God. Into the late Renaissance, paintings often showed the three of them grouped together. In some, Anne holds Mary, who, in turn, holds the infant on her knee. In others, Anne holds a tiny Mary in one hand and Jesus in the other. Still others depict her holding the Holy Child while Mary stands beside her.

“In all types, however, the emphasis is tri-form and emphasizes the maternal lineage of the Child,” Lawless writes. “Thus the fleshly inheritance is shown in an earthy and bodily ‘trinity’ of St. Anne, Virgin, and Child.”

In 1494, the German Benedictine monk Trithemius of Spandheim described the many miracles attributed to St. Anne. She cured melancholia, freed prisoners, helped women in labor, served as the patron saint of miners, and protected people from enemies, thieves, storms, and peril at sea.

She also was arguably responsible for the Protestant Reformation. As a young man in 1505, Martin Luther, the son of a miner, was caught in a violent thunderstorm. He cried out to St. Anne, promising that if she protected him he would become a monk. He soon fulfilled this vow by entering an Augustinian friary, setting the stage for his eventual publication of the Ninety-Five Theses—and for the creation of new branches of Christianity that had far less interest in St. Anne or her daughter.