In a moment when scientists were working to fashion a credible identity for themselves, they had to decide how much showmanship was too much. 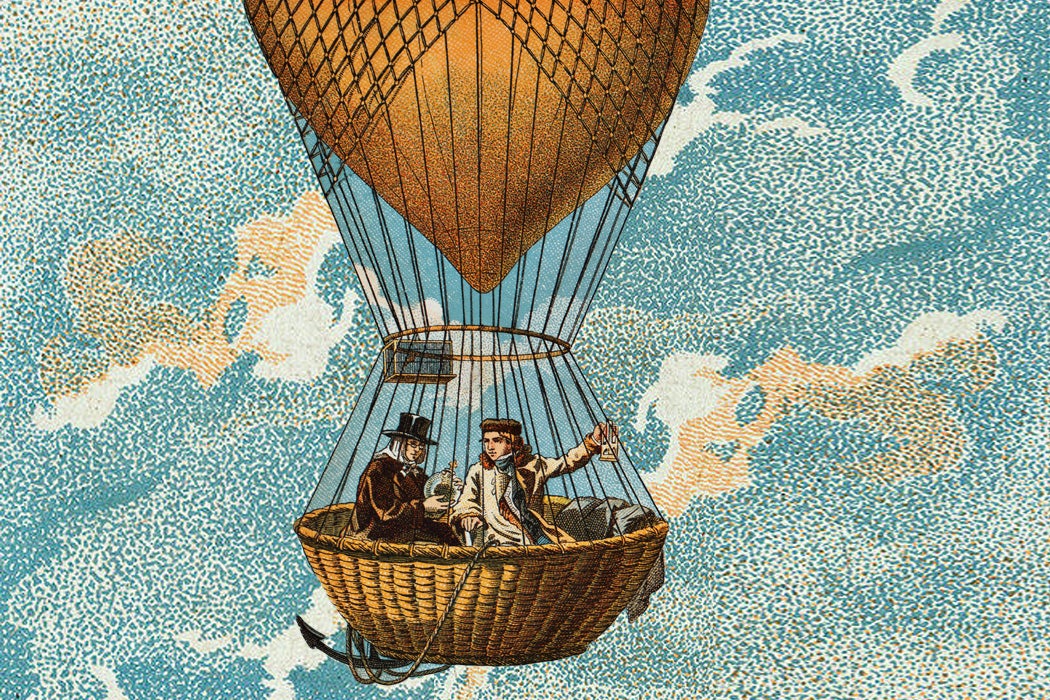 Long before Bill Nye, Neil deGrasse Tyson, and their ilk, scientists struggled to toe the line between showmanship and hard science. When Victorian scientists used gas-filled balloons in order to observe the climate, for example, they had to overcome the public’s perception of gas-filled balloons as morally ambiguous pleasure grounds, piloted by “balloonatics.”

Humanities scholar Jennifer Tucker’s article “Voyages of Discovery on Oceans of Air: Scientific Observation and the Image of Science in the Age of ‘Balloonacy’”  illustrates one of the earliest gas-filled balloon launches and details its impact. Tucker notes that scientific balloon ascents began very respectably, funded by the British Association in order to “test the claim by French astronomers in 1850 that the temperature changed radically above 19,000 feet, a point of special interest to astronomers.”

Not only were the balloons difficult to control once aloft, several spectacular crashes soured the reputation of balloons in the scientific community.

In August 1863, at the Royal Observatory at Greenwich, astronomer and meteorologist James Glaisher shared his observations of atmospheric phenomena at varied elevations, documented from a previous gas-filled balloon voyage with aeronaut Henry Coxwell. After he was done, Glaisher dramatically stepped away from the podium and boarded Coxwell’s gas-filled balloon to again ascend into the clouds.

According to Tucker, it was a moment in history when scientists were working to “fashion a credible identity for themselves,” figuring out how to either work against or redirect stereotypes of discoverers and explorers. How much showmanship was too much? How could a scientist promote his own work but still be taken seriously in the scientific community?

Clearly, Victorian scientists were literally and figuratively on board with the idea of using gas-filled balloons to observe patterns like weather and topography. The British Association even developed a Balloon Committee, although they “soon discovered that ballooning was a difficult field of work with resources not easily accommodated within Victorian science.” Tucker notes that not only were the balloons difficult to control once aloft, several spectacular crashes soured the reputation of balloons in the scientific community. Then there were the spectators who frequently showed up at the launches to taunt the aeronauts and sometimes even mob and burn the balloons.

These would-be balloonists never quite figured out how to contend with “the balloon’s persisting association with vulgar amusement and unruly crowds–an association that scientists could not fully control.” Tucker writes:

Many who commented on the “balloon craze” in Regency and Victorian England expressed tremendous moral ambivalence about balloon ascensions, symbols not just of discovery, innovation, and exotic travel, but of excited crowds, riots, humbuggery, French decadence, reckless endangerment of passengers and spectators, and of the loss of reason and moral propriety. In the early years of aerostation following the invention of the balloon in France in 1783, the Royal Society had, in fact, refused to support systematic exploration in balloons in England, on the grounds that to do so would encourage “Ballomania.”

Despite the Balloon Committee’s efforts to collect empirical evidence and further the science of meteorology, in the end the gas-filled balloon remained a spectacle. Tucker notes that “Glaisher transported science into the air, but in so doing he had to strike an elusive balance between science and show.”

Editors’ Note: This article has been revised to reflect that the balloons discussed are gas-filled balloons, not hot air balloons. In addition, the events of August 1863 took place at the Royal Observatory at Greenwich, and not the University of Greenwich.

Voyages of Discovery on Oceans of Air: Scientific Observation and the Image of Science in an Age of "Balloonacy"
By: Jennifer Tucker
Osiris, Vol. 11, Science in the Field (1996), pp. 144-176
The University of Chicago Press on behalf of The History of Science Society