What Leisure Means for People Who Are Homeless

It’s a human right to have opportunities for rest and time off. Even if you live on the streets. 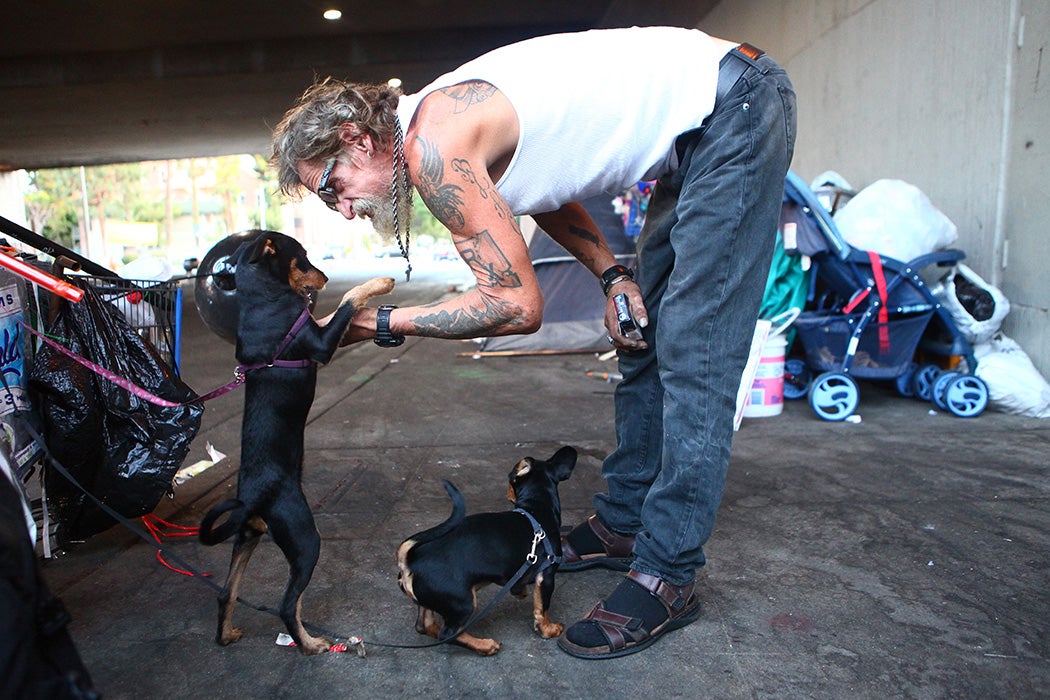 Antonio DeSilva, who is currently homeless, plays with his dogs outside his tent on September 09, 2019 in Los Angeles, California
Mario Tama/Getty
By: Livia Gershon
3 minutes
Share Tweet Email Print

In the summer, many people take a break from the stress of daily life and enjoy some leisure time. But for some people with extremely stressful lives, it’s impossible to spend a week at the beach or camping in the mountains. So psychology researcher Darrin Hodgetts and social scientist Ottilie Stolte decided to take a look at what people experiencing homelessness do for fun and relaxation.

Hodgetts and Stolte write that when they explained their research project to domiciled people, some were confused.

“Our words were met with puzzled glances, laughter and unsettling questions,” they write. “‘But aren’t they already on holiday?’ ‘Don’t they have more pressing needs?’”

The authors write that these responses reflect a work-leisure dichotomy that assumes only people who work for pay are entitled to leisure time, and that the purpose of leisure is to “recharge your batteries” to return to work. Against this, they note that the Universal Declaration of Human Rights states that “everyone has the right to rest and leisure.”

“They’re places I can escape from my reality. It’s a peaceful place… I go there, listen to the water.”

One man discussed a fountain he described as a “common hangout for streeties.”

“The sound of it is really nice and there’s a bench beside the fountain,” he said. “They’re places I can escape from my reality. It’s a peaceful place… I go there, listen to the water.”

A woman described walking through the city imagining herself as a detective, constructing imaginative narratives about who owned a button found in the rubbish. She even got a secondhand mac coat to help her look the part.

“Everything becomes totally different,” she said. “The street itself takes on a completely different atmosphere and life, and you are a different person altogether.”

One man, Jason, described enjoying time reading at the library and parties in the park with friends, cooking discarded food on a gas stove burner. For Jason and many other interviewees, one attractive leisure-time activity was drinking with friends. While homeless people are often stigmatized for drinking, the authors note, in a somewhat understated fashion, that consuming alcohol “has been a key feature of leisure traditions in European countries for some time.”

Other interviewees described riding a free bus around the city and visiting green spaces on the outskirts of urban spaces. Some in Auckland spoke of working in a community garden created by a group of Māori homeless people with members of a Māori tribe.

“As a leisure activity, gardening on tribal land within the city allows this group of homeless Māori men to reconnect with, and enact, their cultural heritage, and to resist losing themselves to the streets,” the authors write.

The authors argue that, for people with or without homes, leisure is not just an escape from the daily grind but an opportunity for joy and fulfillment.

“Leisure enables street homeless people to transform a landscape of mere survival and despair in the city into a more meaningful and humanising socio-scape,” they write.