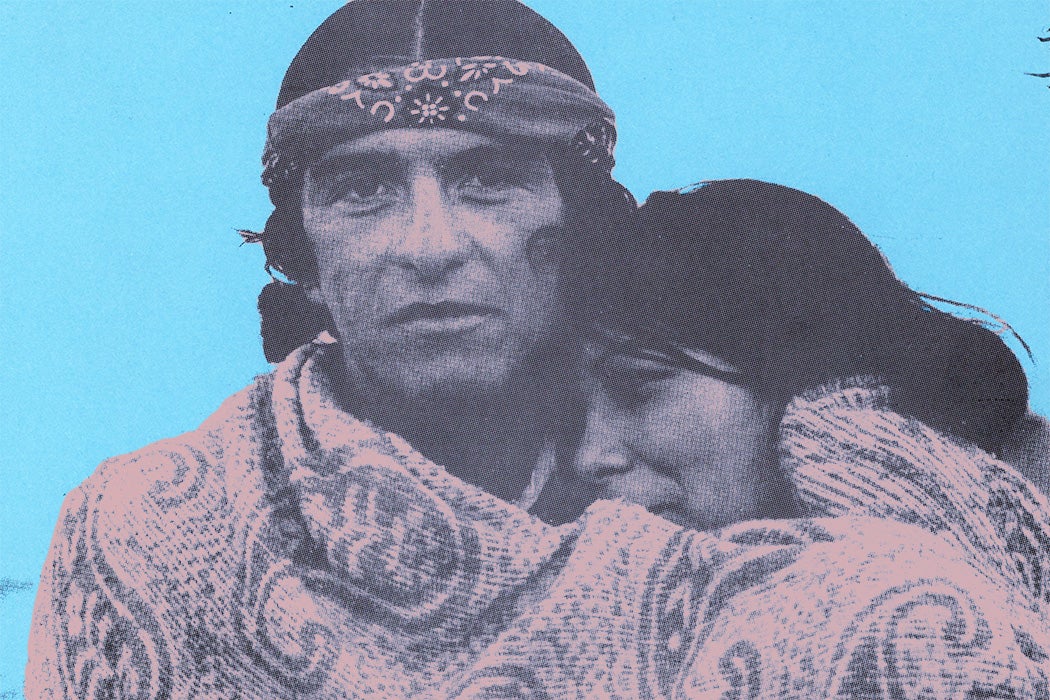 From the cover of The Speaking Leaves, September 1971
via Wikimedia Commons
By: Brittany Marshall
11 minutes
Share Tweet Email Print

Based on the US Census Bureau Data, there are currently more than six million Native American people in the United States and 574 federally recognized Native American tribes across the country. There used to be millions more. Scholars struggle to pinpoint an exact number for the Native American population throughout history. What they have been able to determine is that when Columbus made landfall in the Americas in 1492, “Indians declined in both power and numbers [and] over the next 400 years the native population shrank by millions.” European settlers brought disease and war with them, which sabotaged Native American community and culture. Centuries of persecution and land disputes displaced millions of Native American people from tribes such as the Cherokee, Choctaw, Creek, and Navajo, and many more. 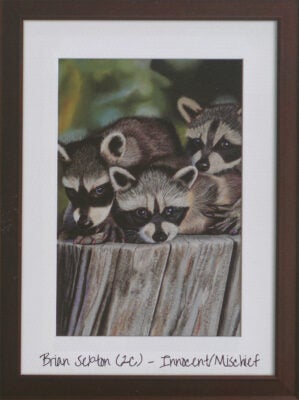 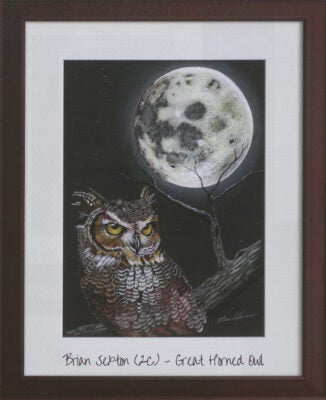 Brian Sexton comes from a family of artists. He has an aunt, sister, and cousin who are all artists, and his mom was a “master craftsperson.” It’s no surprise that not only is he drawn to the creative arts but that he also works with different mediums. He’s done everything from architectural drawings to working with concrete. Like any artist, Brian also has his own art philosophy: “Art has to be able to touch somebody, speak to them. It’s got to resonate, bring to them a special feeling or memory.” Brian’s musings about art echo those of early-nineteenth-century writers and philosophers who believed that art was a deeply emotional endeavor between the artist and the one who consumes art. French philosopher Eugene Veron believed that art was “the emotional expression of human personality.” Similarly, Russian writer Leo Tolstoy believed that art was a “human activity …that one man consciously…hands on to others feelings he has lived through.”

Native American people make up 2.1 percent of all federally incarcerated people, despite making up less than 1 percent of the United States population.

Although Brian shares similar views about the purpose and nature of art with prominent intellectuals like Véron and Tolstoy, he’s unlike them in two important ways. First, he’s incarcerated at the Nash Correctional Institution in Nashville, North Carolina. There have been incarcerated artists as long as there has been incarceration, and Brian is part of  a long line of incarcerated artists who participate in arts programming. In fact, various studies have shown that arts programming can significantly improve self esteem, social competence, and emotional stability. Second, Brian is one-quarter Native American: Chickasaw, and Western Cherokee. According to the Prison Policy Initiative, it’s been difficult to study the effects of incarceration on Native American people due to the tendency to link them with other racial and/or ethnic groups. Nonetheless, there is data that shows that Native American people are over-represented in US jails and prisons. In 2019, they comprised 2.1 percent of all federally incarcerated people, despite making up less than 1 percent of the United States population. 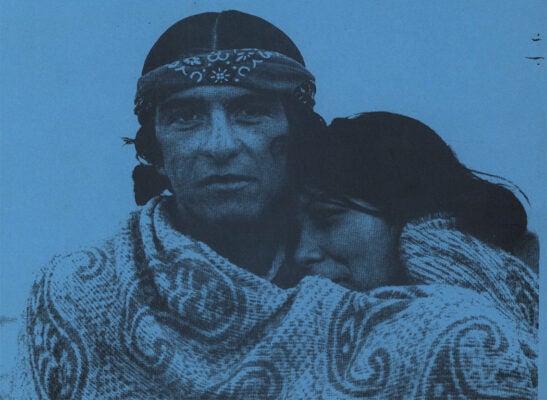 Additionally, it’s also worth noting that Native American people, like other racial/ethnic minorities in the US, have a fraught relationship with the federal government. This is due in large part to disputes over land and various acts of genocide on behalf of the US government such as the Indian Removal Act. Signed by Andrew Jackson in 1830, the act gave the federal government power to exchange Native-held land in the east for land in the west. The Indian Removal Act represented an extreme abuse of power by Jackson, who led brutal campaigns against the Creeks and Seminole people during his time as an Army general. While the policy required the government to conduct the removal treaties fairly and peacefully, President Jackson and his administration ignored the law. Their policy led to the Trail of Tears, when 100,000 Native people were forced to march from their lands in Tennessee, Georgia, Alabama, North Carolina, and Florida in the east to a “specially designated ‘Indian Territory’ across the Mississippi River” in the west. During the march, many families were separated and forced to walk more than 1,000 miles while shackled in chains and held at gunpoint.

Taking these historical aspects of Brian’s cultural identity into consideration, one must wonder: What feelings might Brian hope to hand on to others who come across his work?

A sense of community. One way Brian finds community and connection is through the Nash Art Club, which “pushes [him] out [his] comfort zone.” In an interview with the Nash News editorial team, Brian had this to say of the Art Club:

“If it was not for the Art Club and the classes, I wouldn’t know what I was capable of, the extent of my abilities. It has opened a window of opportunities. It is rehabilitation and soothing.” 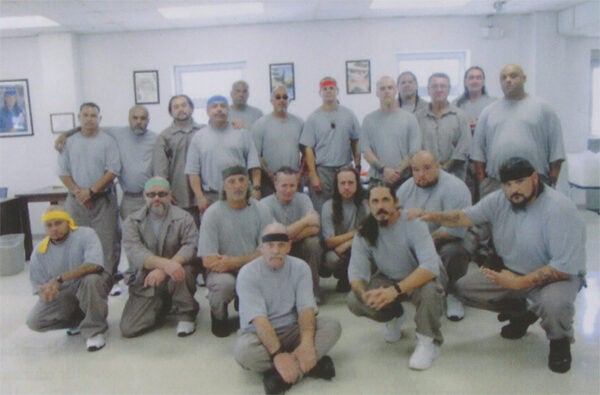 What’s even more extraordinary is that Art Club isn’t the only window of opportunity Brian has to connect with others and himself on a spiritual level. He and his other Native American peers are able to maintain some of their cultural practices and observances while in prison. Members of the Cherokee, Lumbee, Comanche, Lakota, Maya, and Aztec at Nash Correctional Institution gathered to observe the Green Corn festival, which Brian says is a “renewal, a time to forgive transgressions, and start fresh.” This Green Corn festival in particular was also a solemn observance due to the recent loss of “[their] brother Hiram Shannon, known to many as Red Hawk.” Like Brian, Red Hawk had exceptional artistic skills. He was also known for his wisdom and humor.

Although there was a somber mood to the celebration, the men still made sure the celebration was filled with fellowship and brotherhood. Historically, the festival was held in August and the corn was eaten after the event. Then, all of the tribal groups come together again in mid-September and celebrate the harvest of foods such as corn, squash, beans, and tobacco. A traditional meal of the Green Corn festival consists of  chestnut bread, venison, or buffalo.

Another component of the festival is giving thanks during tobacco prayers. During prayer, these groups pay reverence to their lands: “Everything is shared, so the Earth and everything on the Earth is revered and respected.” While the men can’t participate in tobacco prayers or eat the traditional foods, they do enjoy spending time with their families and guests to enjoy a meal while looking forward to the blessings they’ll experience in the upcoming year.

Mental wellness. Being in prison greatly impacts a person’s mental and emotional well-being. Arts programming has a great capacity to “increase inmate’s self-esteem…and improve inmates’ attitudes toward the institution as a whole.” However, art also provides a sense of relief: For Brian, “It’s a type of meditation. It’s a spiritual experience in a way.” This spiritual experience Brian finds through art coincides with his cultural heritage as many American Indian teachings are rooted in the belief that “we are spirits on a human journey. In this journey, health and well-being are a result of the complex interplay between the physical world…mental process, our environment, and the spiritual forces outside of us.” Therefore, Brian’s art is not only an opportunity for him to increase his mental wellness, but it’s also an opportunity for him to explore the impact the prison environment has on his spiritual well-being as a Native American.

Cultural pride. Brian loves drawing landscapes and wildlife, and his art tends to lean towards Native American themes. His love and appreciation of his cultural heritage and identity led to his involvement with a book on the topic titled Brothers of the Buffalo Speak Up: Contemporary American Indian Prison Writings, an anthology produced by Native American people in prison. Autobiographical in nature, many of the works included in the anthology emphasize spiritual healing and invite readers to consider new ways of culturally and spiritually based justice for American Indian men, women, and their families. Additionally, Native American artists often use their art to highlight what Kay WalkingStick describes as fragility of the earth…and its sacred quality.

A Curation of Native American Poetry and Art. Listed below is a compiled list of resources that will allow students to explore Native American culture through art and poetry. Some of the items on the list are also aimed at understanding the impact of art in prison and specific historical moments in Native American History.

Instructors can use their discretion for assigning the material to students. For example, you may choose 2–3 poems to be read before class. When students come to the next class meeting, there can be a brief discussion of the poems while still having some time to watch the TED Talks by JR or Philip Glaser. For homework, students can view the TED-Ed Videos and browse the Google Arts and Culture online exhibitions. The poetry, art, and videos are low-stakes opportunities for students to learn more about Native American art, history and culture which will prepare them for the activities in Step 2.

In order to critically and authentically explore and appreciate Native American culture, it’s important that students are exposed to scholarship written by Native American people. Speaking Leaves and The Little Brave are two newspapers featured in the American Prison Newspapers Collection that are written exclusively by the Native American Cultural Group of Vacaville, California. These newspapers are highly recommended because of how deeply they go into detailing issues that Native American people have faced. For example, this issue of The Little Brave has a creative piece about Native Americans’ experiences with colonists disrupting their way of life and criticizing their cultural traditions. This issue of Speaking Leaves discusses how colonization contributes to a loss of cultural identity. 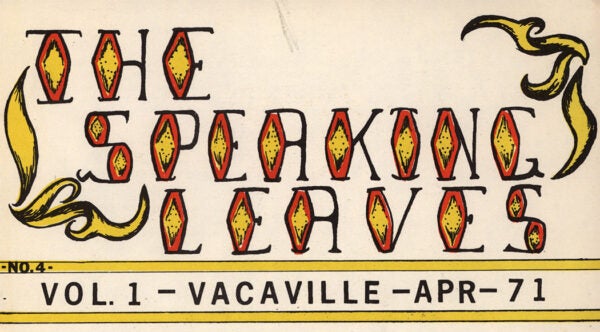 It’s recommended that students browse 2–3 issues from each newspaper. Students should read closely and curiously. While reading, they should take notes of issues and topics addressed in the issue along with noting questions they have while reading. The Cornell Method is excellent for this type of note-taking as it will help students identify key topics, events, and people. While reading their chosen newspaper(s), students should also be thinking about how the poetry, art, videos, and academic articles supplement information in the primary source newspapers. 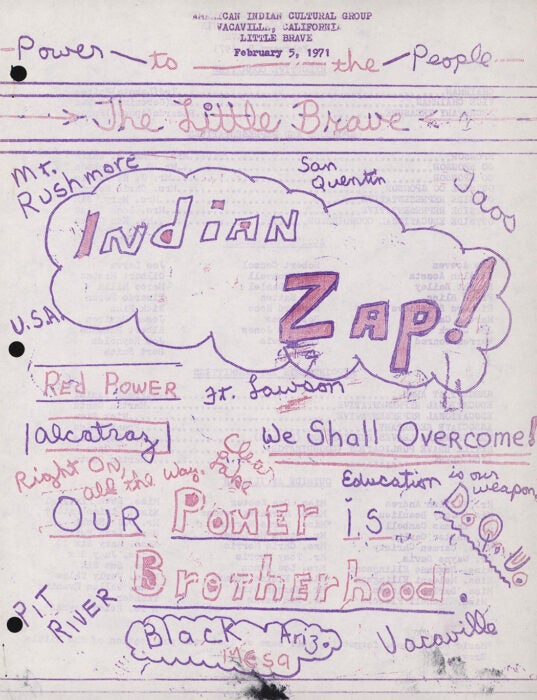 Here are some potential topics:

The presentation or brochure should be informational and creative in nature. Students may choose to select an issue to focus their presentation/brochure on. Or, they may choose to focus on a specific event, person, or group. No matter which option they choose and what their focus is, students should incorporate information from the newspapers and the poetry, art, and videos. It’s important that students demonstrate their understanding of Native American Heritage through a critical and informative lens. 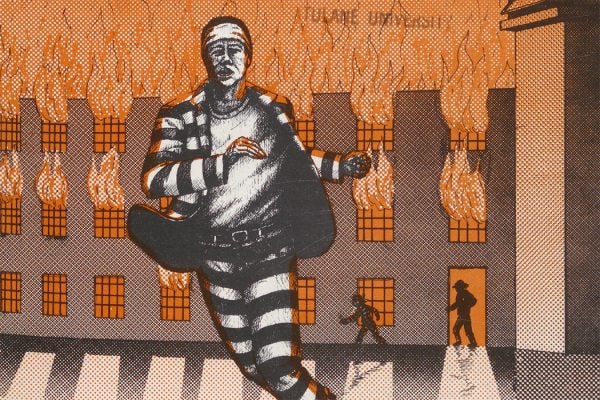