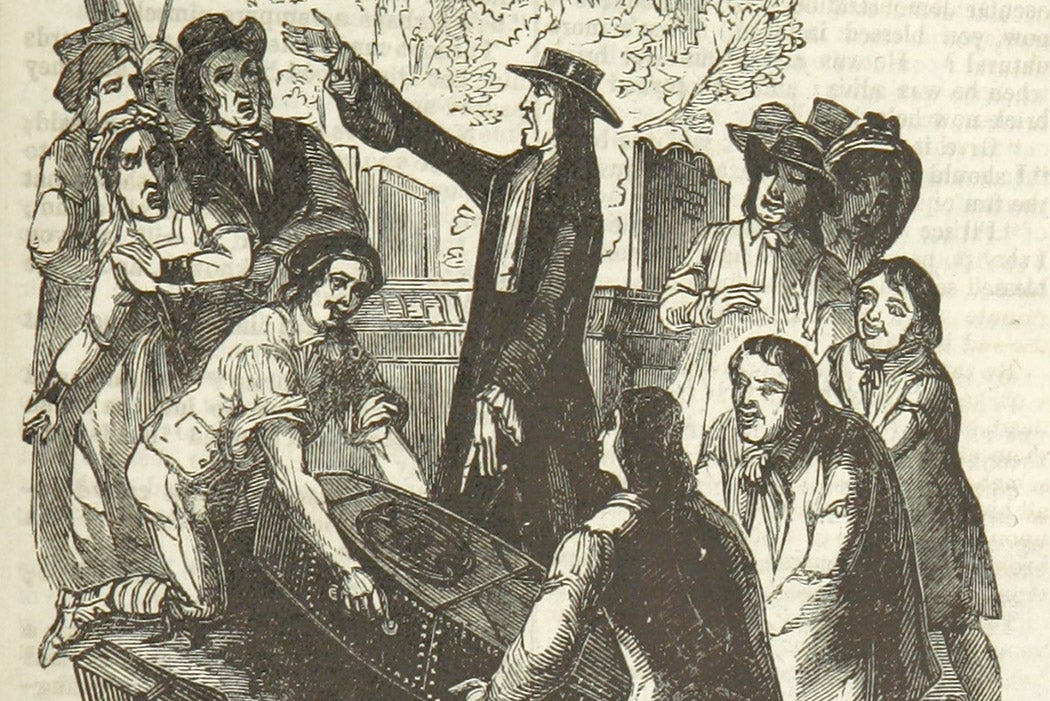 The exhumation of a body believed to be a vampire
via Wikimedia Commons
By: Ashawnta Jackson
3 minutes
Share Tweet Email Print

Nellie Vaughn was buried in West Greenwich, Rhode Island, in 1889. And though death is usually the end of a person’s story, for Nellie it was only the beginning.

Soon after her burial, Nellie was exhumed from her grave at the family’s farm at her mother’s request and moved to the town cemetery. Things took an odd turn not long after her reburial: Nellie was accused of being a vampire.

Vampires were a concern throughout nineteenth-century New England, and Nellie was just one of many people suspected of occupying the space between the living and the dead. As anthropologist George R. Stetson explained in 1896, New England was just one of the many places around the globe that believed in “spirits which leave the tomb, generally in the night, to torment the living.” Rhode Island, in particular, Stetson writes, was “distinguished by the prevalence of this remarkable superstition.”

Entire families were dying, gripped with something that caused them to slowly waste away. One accused vampire, Mercy Brown of Exeter, Rhode Island, died in 1892. Her mother and sister had also passed away, and soon after, her brother became very sick. It looked like he would meet the same fate as the rest of his family. Something was attacking the Browns, and people needed answers.

“Her ailing brother then consumed her ashes in hope of saving himself but nonetheless died a few months later.”

As researchers Donald H. Holly Jr. and Casey E. Cordy detail, “the townspeople convinced [Mercy’s] father to exhume the bodies of the dead in hopes of identifying the vampire that was ‘preying’ on his son and putting surviving family members at risk.” The bodies were exhumed, and while Mercy’s mother and sister were fully decomposed, Mercy was not. This demonstrated, the townspeople reasoned, that she was a vampire, rising from her grave to slowly squeeze the life out of her brother. Consequently, her heart and liver were removed and burned, and “her ailing brother then consumed her ashes in hope of saving himself but nonetheless died a few months later.”

Another Rhode Island resident, Sarah Tillinghast, was also accused of vampirism shortly after her death in 1799. As had happened with Brown, “Sarah’s body was exhumed by her father in an effort to identify the vampire that had killed several of his children and threatened the rest.” It was discovered that Sarah was the vampire when, according to witnesses, her eyes were “open and fixed,” “her hair and nails had grown,” and her “heart and arteries were filled with fresh red blood.” Her organs were removed then burned before she and her siblings were reburied.

The people of New England were afraid, and they were taking drastic measures to calm those fears. As Stetson wrote, in one Rhode Island town, “known exhumations have been made in five families, in the village previously named in three families, and in two adjoining villages in two families.” And according to an 1875 article, one family that was afflicted with disease believed that their dead father “would not rest until he had drawn to himself the nine surviving members of the family, the sickly son, armed with a spade, exhumed his father and cut off his head.”

There’s no argument that people were dying in Rhode Island, but it wasn’t vampires sucking out their life forces. There was a much more mundane cause—tuberculosis. The disease, historian ​​Jeanne E. Abrams writes, had the “distinction of being the leading cause of death in nineteenth- and early twentieth-century America.” As experts learned more about the disease and how it spread, exhumation was replaced by public health measures, ranging from anti-spitting laws to changes in ventilation. What started as a scare fueled by superstition ultimately led to advancements in public health.

The Animistic Vampire in New England
By: George R. Stetson
American Anthropologist, Vol. 9, No. 1 (January 1896), pp. 1–13
Wiley on behalf of the American Anthropological Association
What’s in a Coin? Reading the Material Culture of Legend Tripping and Other Activities
By: Donald H. Holly Jr. and Casey E. Cordy
The Journal of American Folklore, Vol. 120, No. 477 (Summer 2007), pp. 335–354
University of Illinois Press on behalf of American Folklore Society
“Spitting Is Dangerous, Indecent, and against the Law!” Legislating Health Behavior during the American Tuberculosis Crusade
By: Jeanne E. Abrams
Journal of the History of Medicine and Allied Sciences, Vol. 68, No. 3 (July 2013), pp. 416–450
Oxford University Press