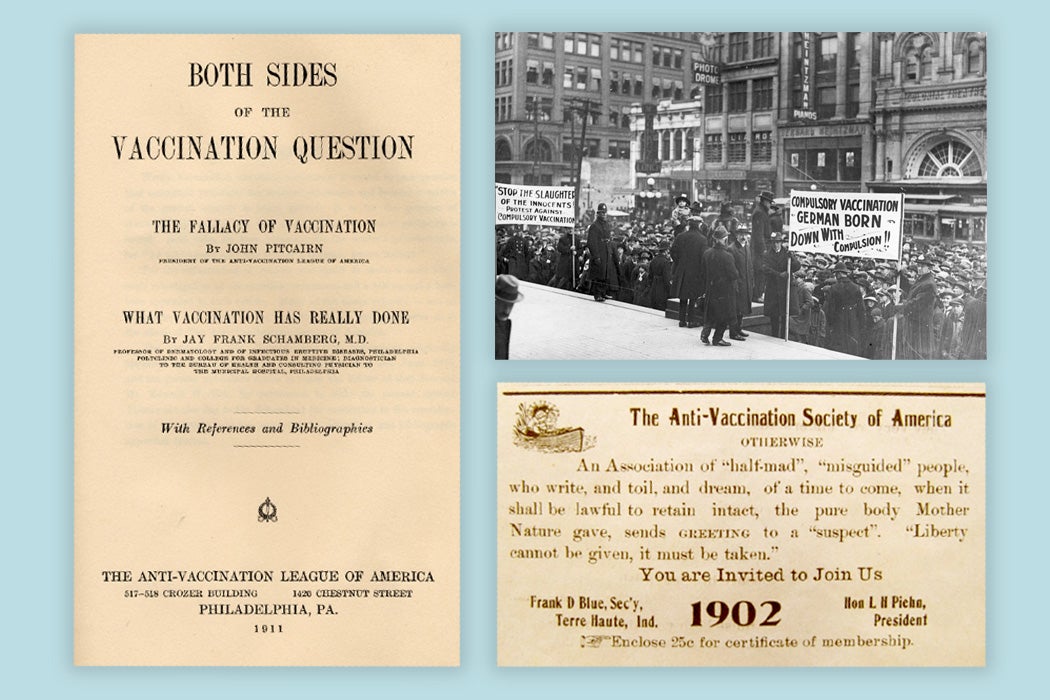 Since their introduction in early nineteenth-century America, vaccines have given rise to anti-vaccine movements. Opposition has come from various ideological quarters, driven by what scholar James Colgrove calls the “linked claims” of perceived health dangers and threats to personal liberty. Concentrating on the 1920s, Colgrove describes a movement that sounds familiar one century later.

As Colgrove writes: “Antivaccinationism was a response to two broad and interrelated trends… first, the proliferation of biological products for preventing and treating illness; and second, reform efforts that expanded the reach of the state into previously private spheres.”

Dubious manufacturers and ineptly run vaccination campaigns gave the first vaccinations a poor reputation. Safety took a big leap forward in 1902, with the US Public Health Service’s authority to license and inspect vaccine manufacturers. In 1905, the Supreme Court affirmed the constitutionality of compulsory vaccinations.

“Barbarous medical child-slaughter” was a not-atypical 1920s description of vaccination.

Vaccination originally meant using cowpox to fight smallpox. By the 1910s, however, there were vaccines for cholera, plague, and typhoid. The new century looked promising, with hopes for combating tuberculosis, pneumonia, and even cancer through vaccination.

But scientific achievement “provoked an anti-modernist backlash against the paternalistic and potentially coercive uses to which scientific advances might be put,” Colgrove writes. Opposition arose to state and civil institutions that had “expanded their purview over matters once reserved to the individual, the family, or the church.” Earlier Americans may have spent their lives without visiting a doctor, but life insurance and worker’s compensation required medical examinations. Health professionals took an increasingly large role in people’s lives. Requiring that children be vaccinated for school attendance was another bone of contention.

Antivaccinationists decried the elitism of public and private bureaucracies. They argued that there was “a well-laid plan to medically enslave the nation” and that “state medicine” was socialism. “Barbarous medical child-slaughter” was a not-atypical 1920s description of vaccination.

Such rhetoric came from groups like the Anti-Vaccination League of America, founded by two wealthy businessmen; the Citizens Medical Reference Bureau (“In Defense of Parental Control over Children”); and the American Medical Liberty League. The latter’s spokesperson was Lora C. W. Little, one of the few women leaders of the antivaccinationists.

Meanwhile, Christian Scientists, Swedenborgians, and some homeopathic and most chiropractic practitioners also opposed vaccination. Antivivisectionists weren’t necessarily against vaccination, but they did decry the use of calves in developing the smallpox vaccine.

Publisher Bernarr Macfadden was one of the most influential of the antivaccinationists. His media empire reached some 40 million Americans through magazines like Physical Culture, True Story, and True Detective Mysteries. His New York Evening Graphic, a tabloid specializing in sex and crime stories, was particularly tabloid about vaccination. Macfadden was not above fake news, eventually admitting that the Graphic’s sensational story “Vaccination Killed My Two Sisters” wasn’t, as originally claimed, written by a doctor.

The antivaccination movement of the 1920s faded with the Great Depression and the deaths of its most notable personalities. But antivaccination tendencies never completely disappeared. In the 1980s, controversy over the safety of the pertussis vaccine saw a return of the fears and rhetoric of the Twenties. The COVID-19 pandemic, meanwhile, has been paralleled by a viral spread of antivaccination sentiment.

“Science in a Democracy”: The Contested Status of Vaccination in the Progressive Era and the 1920s
By: James Colgrove
Isis, Vol. 96, No. 2 (June 2005), pp. 167-191
The University of Chicago Press on behalf of The History of Science Society