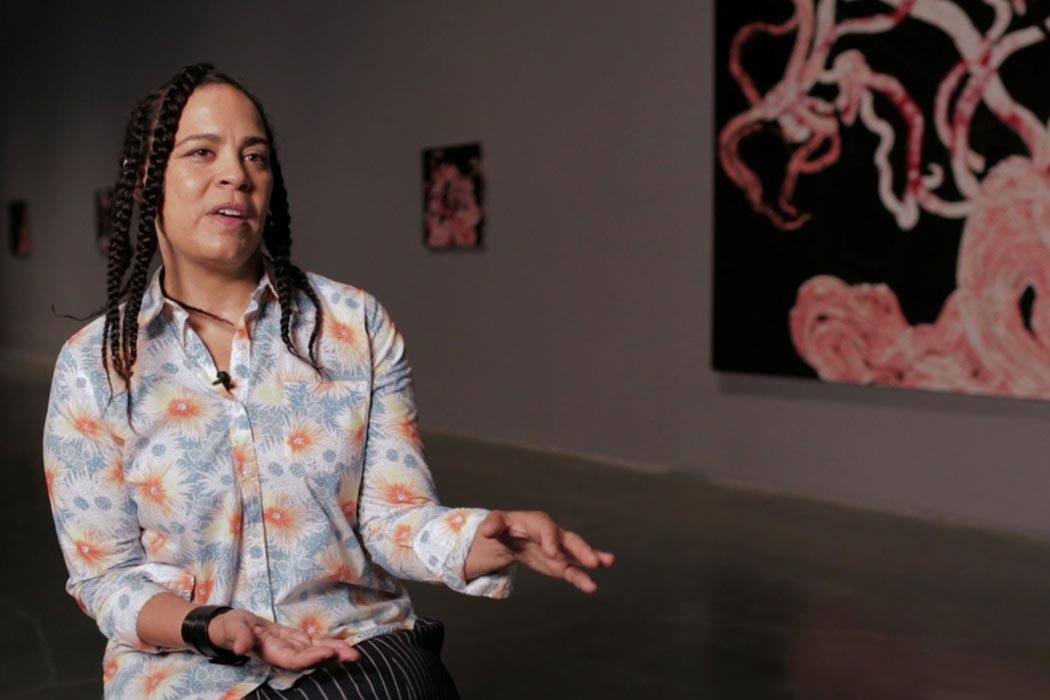 Drawing from a vast archive of cultural references, the artist Ellen Gallagher uses a cartoon-like style to highlight pervasive, exaggerated, and pejorative caricatures of African Americans. She also often complicates her paintings with textual references, such as lines of Emily Dickinson’s poetry. Judith Wilson succinctly argues that Gallagher melds image and text precisely in order to question both that cultural archive and the history of cultural amnesia about it.

Wilson delves into an analysis of the evolving style and subjects of Gallagher’s works, noting that:

“While she favors simple forms, they often have complex genealogies. In many of her paintings of the past two years, for example, tiny coffee-bean-shaped lozenges mass in various formations. They stem from a cloud of red pigment that appears in a 1992-93 canvas, Untitled (Doll’s Eyes) [found on pg. 336 here]. Reading the red smudge as a lipstick stain eventually led the artist to draw small, disembodied pairs of stylized black lips: the sort of rubbery, banana-shaped lips that were standard elements of the grotesque rendition of African features in 19th- and 20th-century U.S. mass media, advertising, and entertainments, as well as in objects ranging from tea cosies to children’s toys.”

Wilson distinguishes Ellen Gallagher’s work as being uniquely independent: “[p]ost-pop, post-painterly, and post-minimal, Gallagher operates in a space cleared by contemporary feminist, semiotic, black, and cultural studies discourses. Yet her art negotiates these busy intersections in a starkly independent fashion.” She argues that Gallagher’s color palette often purposefully mimics skin tones “as a source of ambivalence and/or alienation in a strictly color-coded society.” She forces viewers to confront and question the pervasive color-codes of American society, while also pointing to a larger ambivalence surrounding those codes.

In a later well-known series, Gallagher created DeLuxe (2003), a portfolio of sixty individual, framed prints hung in a grid in a specific sequence. Using printmaking and traditional paints, she transformed beauty product ads geared toward African Americans to call attention to the complexity of racial identity and the nature of consumerism present in the original advertisements.

Through her paintings and prints, Ellen Gallagher boldly challenges viewers to reexamine that which they think they might already know—whether through stylized allusions to cartoons and childhood toys or via transformed and manipulated advertisements. In this sense, Gallagher’s work “seduces the viewer into visceral engagement with images about which we have learned to feel numb. This is risky art… probing the formal nature of painting and pushing politics of representation past existing thresholds. Risky, too, in what it asks of viewers, daring us to see intimately and make connections collectively forgotten.” 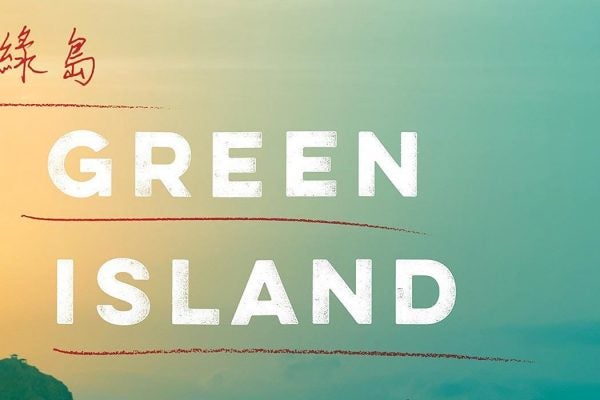 Shawna Yang Ryan's "Green Island," explores the 2-28 massacre, in which tens of thousands of Taiwanese were killed by Kuomintang troops in 1947.