The number of children acting like adults on stage reflects how conflicted nineteenth-century Anglo-Americans were about the definition of childhood. 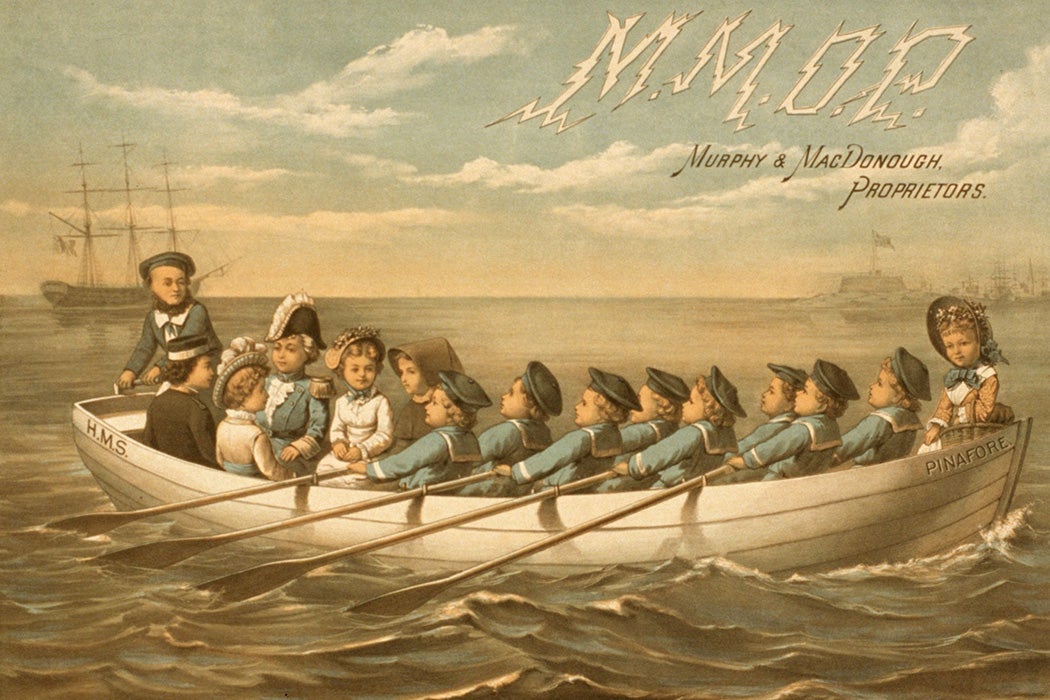 Maybe you’ve run across Bugsy Malone, a 1976 movie musical comedy about gangsters with an all-child cast and machine guns that fire whipped cream instead of bullets. The film, starring Jodie Foster and Scott Baio, did quite well in the United Kingdom. It did less well in the United States, which is noteworthy because the wildly successful all-child touring “miniature Pinafores” of a century before actually originated in the US.

As Marah Gubar tells it, British touring companies of Gilbert and Sullivan musicals with all-child casts of the late 1870s and early 1880s are better remembered than American productions today. But the idea for this topsy-turvy flipping of age roles started at Philadelphia’s Broad Street Theatre in April 1879. It came out of a long tradition of placing child performers in adult roles—there were plenty of experienced juvenile actors ready to jump into these plays. Within a week of the Broad Street debut, a competing troupe was performing a Lilliputian Pinafore in New York City. It took several months before Richard D’Oyly Carte’s famed English version got going.

These performances raised all sorts of questions about what children were, exactly.

But on both sides of the Atlantic—and Pacific, since Australian troupes came to the US and and US troupes toured India and Southeast Asia—these performances raised all sorts of questions about what children were, exactly.

The shows disrupted the child/adult binary invented by the Victorians themselves. The young actors’ “startling competence destabilized the idea that a strict line divided child from adult, innocence from experience.” Gubar calls this “age transvestism”—“children impersonating adults and vice versa,” which, like gender transvestism, sparked a “category crisis.”

“The all-child Pinafore productions […] were simultaneously praised as an empowering vehicle for working-class children determined to achieve financial independence and denounced as a fatal form of exploitation practiced by greedy adults on helpless children,” writes Gubar.

With hundreds of professional children on stage, adults asked if children were “originally sinful or originally innocent?” They could be “totally other or really quite similar to adulthood, as competent or incompetent.” The uncertainty reveals “how conflicted nineteenth-century Anglo-American culture was” about childhood. The conflicts played out in the struggle over child labor laws, compulsory education, and the raising of the age of consent, all of which met “fierce resistance” into the early twentieth century.

The New York Society for the Prevention of Cruelty to Children, founded in 1875, was, for example, adamantly opposed to kids in adult roles. Such “schools for vice” turned girls to “prostitution at an early age” and boys into “thieves and tramps.” In response, defenders “veered to the opposite extreme,” writes Gubar, and insisted that all performers were as happy as clams. Louisa May Alcott, for one, called the phenomenon a “jolly lark” that yielded a “rich cargo of comfort, independence, and pleasure.” The hero of one of Alcott’s stories earns money in a children’s Pinafore to save his ailing sister’s life.

The reality was more mixed. Stage work could certainly be difficult and dangerous, and some theater managers “exploited and mistreated juvenile performers.” Impresario Tom Pollard, for instance, took his troupe of tots to Singapore without actor or family consent, in what parents and press called a kidnapping; the kids were exposed to “cholera, smallpox, and a too-close-for-comfort encounter with an eruption of Krakatoa.” Other child actors, however, went on to long careers on the stage.

“The ever-present threat of scandalous mistreatment and sexual precocity,” writes Gubar, “was another key part of their appeal.” Even for children in the audience: Henry James, for example, recounted his childhood response to juvenile actors who specialized in adult roles: “they filled me with fascination and yet with fear.”

Indeed, countering the notion that such performances were solely prized by voyeuristic adults, Gubar notes that children flocked to performances by their fellow children. Theater managers, who had invented the matinee to bring more women and children to the ticket office, knew they were onto a good thing for business.

“Young people did indeed form an important and intended and actual audience for all-child productions [and] individual children found the sight of thoroughly professionalized child actors arresting, empowering, and even crush-inducing,” concludes Gubar.