After World War II, many women in industrial jobs put down their wrenches. But the spirit of Rosie the Riveter couldn’t be denied. 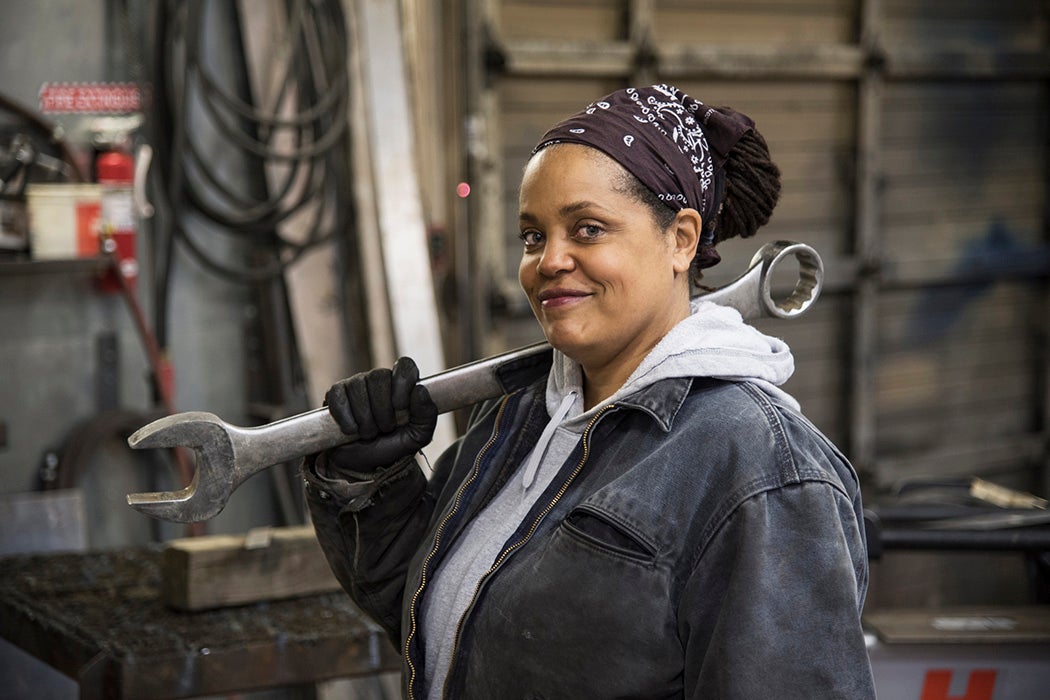 World War II was a huge upheaval in the United States, touching every sphere of life: economic, financial, cultural, and social. Gender roles, too, shifted under the heavy weight of war, and women moved into traditionally male roles, taking on more work outside the home, and learning technical jobs that involved repairing and fixing. After the war, returning soldiers began retaking those jobs, and Rosie the Riveter put down her wrench—whether she liked it or not.

But once society changes, it’s hard to change it back. As Amy Bix shows in Women’s Studies Quarterly, postwar tool manuals gradually became an expression of women’s burgeoning awareness of their capabilities and desire to exercise their autonomy outside the home.

Even when talking about manual work women could do, language constantly reinforced domesticity.

At first, media began to readapt to the idea that technical or mechanical work was for men. “Reflecting renewal of traditional gender divisions,” Bix writes, “…explicit technical encouragement for postwar women soon grew scarce. A 1956 list, ‘A Tool Kit of Your Own,’ no longer treated ‘your’ as female.” Additionally, a photo in a 1947 issue of Good Housekeeping had “manicured fingers installing faucets,” but photos from 1956 “showed male hands.”

According to Bix, even when talking about manual work women could do, language constantly reinforced domesticity. One magazine of 1950, offering advice on building a barbecue, used the metaphors of icing cake when bricklaying and mixing cement into a “batter.” (It also suggested, “If you’re all thumbs, by all means beseech, shanghai, or just plain hire a man to build one for you.”)

But the feminist turn of the next few decades also found its way into repair manuals, particularly after women became a major slice of the real estate market.

Bix explains, “Since the 1920s, material explaining equipment to women assumed that listeners were primarily current or future housewives, whose husband bought their home and who wanted to avoid nagging him or incurring professional repair bills.” By the 1990s, however, women accounted for an increasing share of homebuyers, so a “flood” of books “took a radically different angle, promoting technical knowledge to women as homeowners themselves[.]”

Bix gives examples of several authors whose circumstances had forced them to become home repair experts, despite no previous experience, making them perfect guides for bewildered readers.

Two writers, Julie Sussman and Stephanie Glakas-Tenet, “taught themselves . . . because their busy husbands were hardly ever home,” according to a blurb of their book. Other writers cited divorce, such as Beverly DeJulio, “a mother of four facing a broken sump pump,” who “‘realized there was no shoulder to cry on. . . .The only person who was going to fix that pump was me.'”

Allegra Bennett was confronted with an overflowing waste disposal. “To unblock the drain, she said she ‘whacked about four inches off’ a dishwasher hose, and her disposal worked ‘for the first time in two years…. I was the maven of the universe. I’d finally achieved appliance peace.’ When her ex admitted he had never understood that hose, she had a ‘liberating … epiphany of pivotal proportions’ that men’s technical superiority was mere ‘bluff.'” Later, Bennett began a repair-oriented column which later expanded into magazines, TV, and online.

Additionally, many manuals and advice columns took on a deliberately empowering undercurrent, not limiting themselves to strictly technical advice. Bix cites examples of columns that subverted expectations by using innuendo, urging women to wear male gear and portraying “technical independence as a new frontier of feminist progress.”

The rhetoric in tool manuals went far beyond sawing, plastering, gluing, and drilling; it became a practical, everyday call to arms. As Bix explains, “Dare to Repair began, ‘Women have stood on the floor of the Senate, rocketed into space, and climbed up corporate ladders. We’ve broken through glass ceilings—we just never learned how to fix them! . . . Dare to raise the bar for what you can accomplish. Dare to level the washing machine that’s been rockin’ and rollin’ for months.'”