The World’s Fair That Ignored More Than Half the World

The spectacle of the World’s Columbian Exposition of 1893 was unrivaled in its time. But it hardly represented the “world” of women and African-Americans. 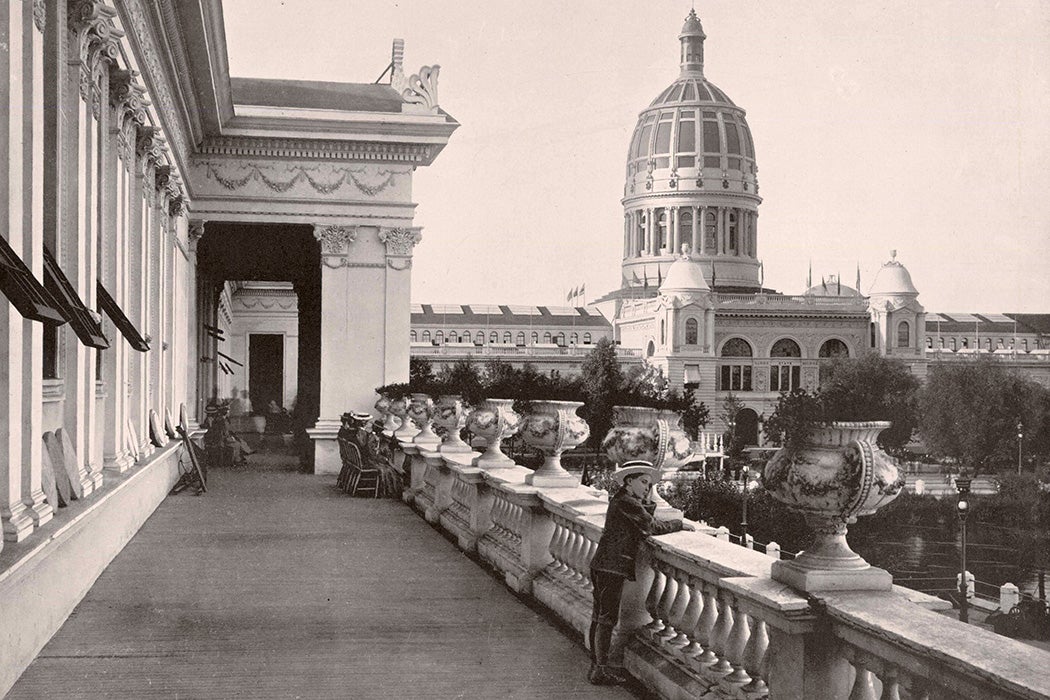 View from Balcony of Woman's Building at the World’s Columbian Exposition, 1893
via Wikimedia Commons
By: Rachel B. Tiven
4 minutes
Share Tweet Email Print

The World’s Columbian Exposition of 1893 was a spectacle that has no real equivalent today: Think of a theme park where you can also listen to TED Talks, or the most cutting-edge trade show ever, held in obsessively manicured fairgrounds.

Between May and October, the nation and the world flocked to the exposition, often called the Chicago World’s Fair or the “White City,” for the white stucco that gave the whole exposition a marmoreal gleam. More than 27 million people attended—nearly half the population of the United States at that time. This was no private Coachella or Aspen Institute—Congress appropriated the initial funding, and the fair’s governing board was appointed by the president.

The Lady Managers were as powerless as their name suggests, and couldn’t get women’s accomplishments included outside the Woman’s Building.

But neither women nor African-Americans were part of the project’s planning stages, nor were they allowed to play any prominent roles in the substance of the exposition, write Elliott Rudwick and August Meier. White women, Black men, and Black women all lobbied the president for seats on the governing board, jobs, and more than token representation in the fair, to no avail. They didn’t have much leverage: In 1893, white men held almost all political power everywhere. No women served in Congress, and only in Wyoming (population 62,555) could women vote in federal elections. Reconstruction was long over; Black men in the South could barely vote, and only one African-American man served in Congress.

But the World’s Fair was too big to ignore.

Rather than include the full range of women’s ingenuity, creativity, and hard work throughout the fair, the all-male Board of Governors approved “The Woman’s Building” as a substitute, and a “Board of Lady Managers” as a consolation prize for denying women even one seat on the board. As Gail Bederman explains, the Lady Managers were as powerless as their name suggests, and couldn’t get women’s accomplishments included outside the Woman’s Building.

Unfortunately, white women’s limited role in the fair didn’t make them sympathetic to the near-total exclusion of African-American women and men. Historian Ann Massa writes that when Black women requested a seat among the 115 Lady Managers, the white women refused them. The white women complained that they couldn’t pick from among several groups of Black women activists and thus would seat no one at all. They ultimately offered an unpaid secretarial role to Fannie Barrier Williams—a college graduate and accomplished educator. She was disgusted but took it, because it was literally the only professional role a Black woman would fill at the exposition. (The enterprise employed tens of thousands of people.)

In fact, African-American accomplishments weren’t featured in the White City at all. Thirty years after the Emancipation Proclamation, the remarkable postbellum achievements of slavery’s survivors were all but erased from the story of America. Among 65,000 exhibits, only a few tokens of African-American art and invention were grudgingly included, among them sculptor Edmonia Lewis’s busts of Phillis Wheatley and Hiawatha. Even Frederick Douglass—the most famous Black man in America—spoke publicly only on “Jubilee Day,” a one-time marketing gimmick in August targeting African-American spectators.

Amid more than 300 women speakers at the fair, only six African-American women—including the veteran activist Frances Ellen Watkins Harper and scholar Anna Julia Cooper—were given speaking spots throughout the summer, including during a week-long World Congress of Representative Women.

Muckraking journalist Ida B. Wells had no platform at the fair, so she made her own. She had just returned from a successful British speaking tour that helped her launch her anti-lynching crusade. She was furious about the exclusion of Black accomplishments from a fair meant to showcase American exceptionalism. What better demonstration of America’s uniqueness, Wells asked, than to exhibit “the progress made by the race in 25 years of freedom as against 250 years of slavery”?

Wells and Douglass sat down and wrote a pamphlet that they distributed to more than 10,000 visitors at the fair, titled simply The Reason Why the Colored American Is Not in the World’s Columbian Exposition. It was a collection of essays: Ferdinand Barnett (Wells’s future husband) recounted their futile efforts to be included in the fair; Garland Penn described the great accomplishments of inventors and artists since Emancipation; and Wells scorchingly denounced the real savagery in America: the lynching of Black people.

When the Chicago World’s Fair was over, its organizers pronounced it a massive success. Yet it had failed in its mission to share the best of American accomplishments and vision. In excluding the ingenuity of more than “one half the people,” the fair couldn’t deliver on its promise.