The Red Woodstock: Not Quite According to Plan

The 1973 World Festival of Youth and Students highlighted the paradoxes inherent in the East German socialist project. 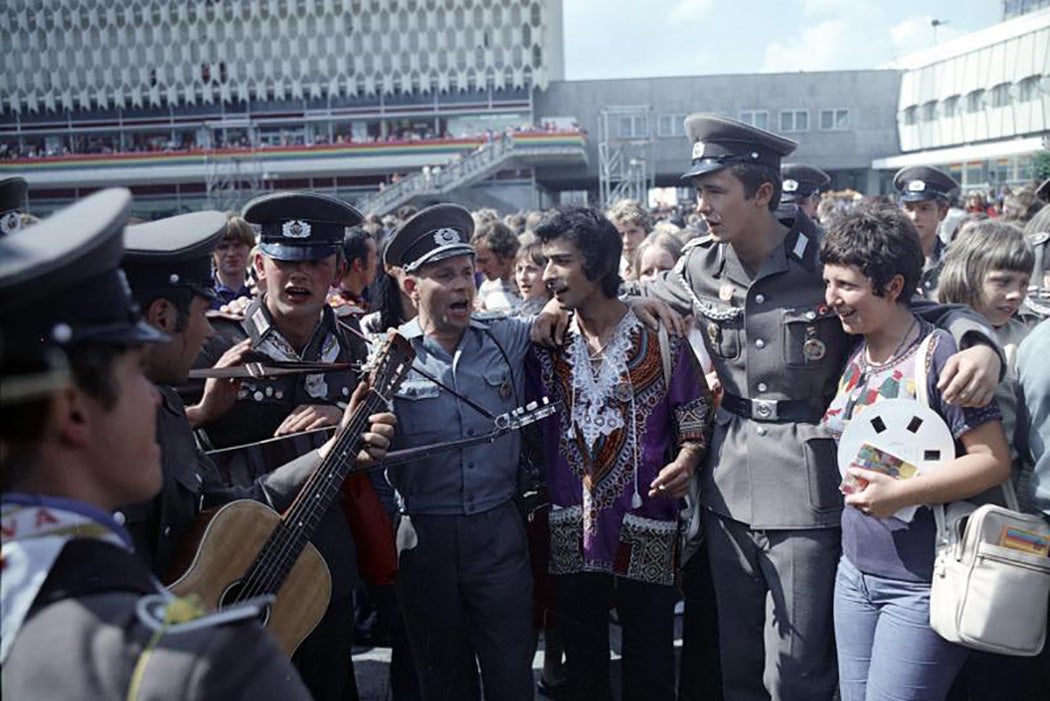 What happened when the profoundly authoritarian German Democratic Republic (GDR, or East Germany) sponsored an international youth festival in East Berlin in 1973? Not everything went according to plan. The agenda of internationalism, socialism, and anti-imperialism couldn’t be contained within official bounds.

As scholar Katherine White explains, “Young people from the GDR and beyond transformed the East German capital, through a subtle appropriation, transformation, and even subversion of the state-generated discourse on international solidarity, in ways that would, time and again, upend East German norms.”

Thousands were arrested, others were subjected to increased surveillance, and hundreds were banned outright from the city.

As White points out, it’s a challenge to police festivals, which by their very nature veer towards the anarchic. The World Festival of Youth and Students, known better as “Red Woodstock,” wasn’t three days of peace, music, and mud like the original Woodstock in 1969, but it did roil up the youth and expose the state’s contradictions. The GDR resounded with repercussions from the event through the remaining decade and a half of its existence.

Officials prepared for the festival by cleansing East Berlin of “asocials” like sex workers and “hooligans.” Thousands were arrested, others were subjected to increased surveillance, and hundreds were banned outright from the city. Uniformed and plainclothes police (Volkspolizei), the Ministry for State Security (Stasi), and deputized members of the Free German Youth state organization then heavily patrolled the festival.

But even the most repressive states can only do so much to control public space. East Berlin was flooded with a “steady stream of bodies and subversive materials” from abroad.

Given permission to imagine an “international socialist ideal,” attendees made manifest the planners’ vision of solidarity among a racial/ethnic/cultural heterogeneity. The planners wanted this image of solidarity and heterogeneity. But in the streets, and under the sheets, actual solidarity couldn’t be so easily contained. Young people ended up both reinforcing and rejecting the state’s “structuring of public space.”

The stars of the festival were American revolutionary Angela Davis and the head of the Palestine Liberation Organization (PLO), Yasser Arafat. White writes that Davis and Arafat were both “distinguished guests and the classic embodiment of the ‘other’ that the state sought to celebrate, and control.”

Attendees, after all, had their own agendas. Pan-African groups demanded that apartheid South Africa and Rhodesia not be allowed to send delegates. They also threatened to boycott if Chinese Maoist youths were not allowed to attend. East Germans wearing keffiyehs in solidarity with the PLO may have given the Stasi, worried about a Munich Olympics-style terrorism, conniption fits. Meanwhile, the blacklisted East German singer/songwriter Wolf Biermann performed in public ringed by an audience that wouldn’t let the Stasi in to stop him. (Biermann wouldn’t be allowed to return home after a tour of West Germany in 1976.)

The emergence of rumors, nine months later, of a cohort of Weltfestkinder (world festival children) points to another aspect of the festival the state had a hard time controlling: sex and gender. The festival was described as another “summer of love.” The festival also saw East Berlin’s first gay rights demonstration, led by an Australian in the British delegation, and the formation of a gay and lesbian grassroots movement within the ranks of the Free German Youth itself. (East Germany decriminalized homosexuality in 1969, before West Germany did.) But solidarity has its limits. Africans were welcome as symbols of solidarity at the festival, but the socialist embrace didn’t encompass official or social acceptance of interracial relationships. For international youths and workers living in the GDR at the time, interracial marriages were expressly forbidden.

The great contradiction of East Germany was that it embraced internationalism, anti-imperialism, and socialist solidarity while being a police state that operated a vast surveillance system in the name of a one-party dictatorship that was backed up by the military might of the USSR. The “global lexicon of resistance” the GDR attempted to appropriate and manage at the World Festival of Youth and Students was like the proverbial petard that blows up in the bomber’s face.

It's the 50th anniversary of the famous Woodstock festival, which was fraught with controversy before it even happened.