The Rebellious, Scandalous Origins of Polka

The dance is often associated with the traditions of immigrant communities in America. But it emerged in Europe during a time of radicalism. 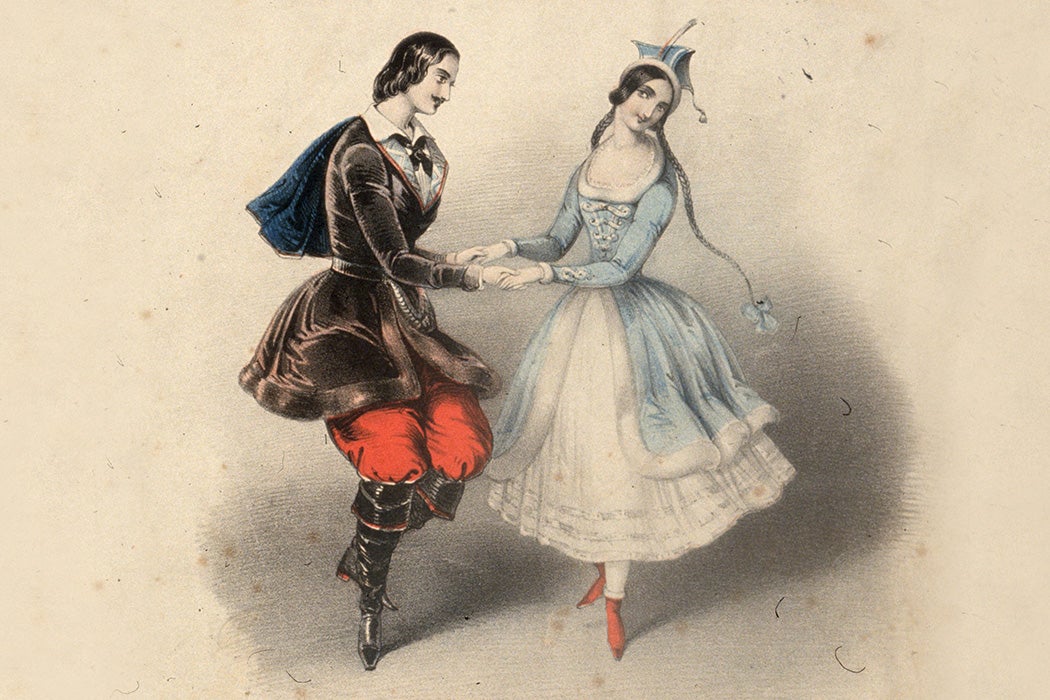 The distinctly Midwestern appeal of the polka is embedded in European ethnic communities determined to keep an old-world tradition alive. But, as historian and polka bandleader Rich March writes, the actual origin of the dance is not lost in the historical mists. It began as a fad that swept rapidly across European countries and all the way to the US in the 1840s.

An often-told origin story of the dance is that it was invented by a servant girl in Bohemia whose employer wrote it down and shared it with the world. March notes several holes in this story. First, polka is a couple’s dance, not easily performed by a single person. Second, even if the employer knew dance notation, how many people could have replicated the dance after seeing it on paper?

“No father of a family…can rejoice in seeing his daughter’s waist spanned by the arm of some deboshed dragoon.”

According to March, this story is most likely the brainchild of intellectuals influenced by the Romantic movement, which idealized peasant culture without real knowledge of it. The truth is probably that the polka evolved from the waltz, which had itself been a dance craze in the 1780s. Unlike earlier, refined dances performed by elites, like the quadrille and the minuet, the waltz involved a scandalous amount of physical contact between partners. As late as 1853, a writer at Blackwood’s Magazine complained about the waltz, writing that “No father of a family…can rejoice in seeing his daughter’s waist spanned by the arm of some deboshed dragoon.”

The polka was even worse.

“Couples whirling in each other’s arms now hopped frenetically to a sprightly, rapid tempo,” March writes. “High society was outraged by this fast couple’s dance. It’s no wonder polka was embraced not only by young members of the elite but also by the middle and working classes.”

The 1840s was a revolutionary time in Europe, and the polka was a dance of rebellion against the aristocracy. It spread quickly across the continent, and across the Atlantic. On June 10, 1844, a New York Daily Tribune writer commented, “It is of course known to that portion of our readers who delight in ‘fashionable intelligence’ that a new dance has been introduced [in Europe] called the ‘Polka.’…It is odd to think that our people have a fashion of imitating all the new follies of Europe.” The fad crossed class lines. Two years later, a news story announced that every “street urchin” was chanting “Won’t you dance the polka?” Polka song titles were ripped from current events, including “Electric Polka” and “Barnum’s Baby Show Polka.”

Through the 1850s and 1860s, March writes, polka was part of mainstream American culture. It was only in the decades that followed, as German immigration grew, that the dance became associated with European ethnic minorities. Germans, Poles, and other Central European immigrants kept the dance alive even as the broader culture moved on to new crazes.

As March says, “Even though it was a recent fad when they left Europe and not an ancient tradition, these immigrants reconceived polka as important to their European heritage.”

POLKA HEARTLAND: WHY THE MIDWEST LOVES TO POLKA
By: RICK MARCH and Dick Blau
The Wisconsin Magazine of History, Vol. 99, No. 1 (AUTUMN 2015), pp. 50-53
Wisconsin Historical Society