The Pious Undead of Medieval Europe

Bishop Thietmar of Merseburg’s eight-volume history contained stories of the living dead—and, he believed, proof of the Christian resurrection. 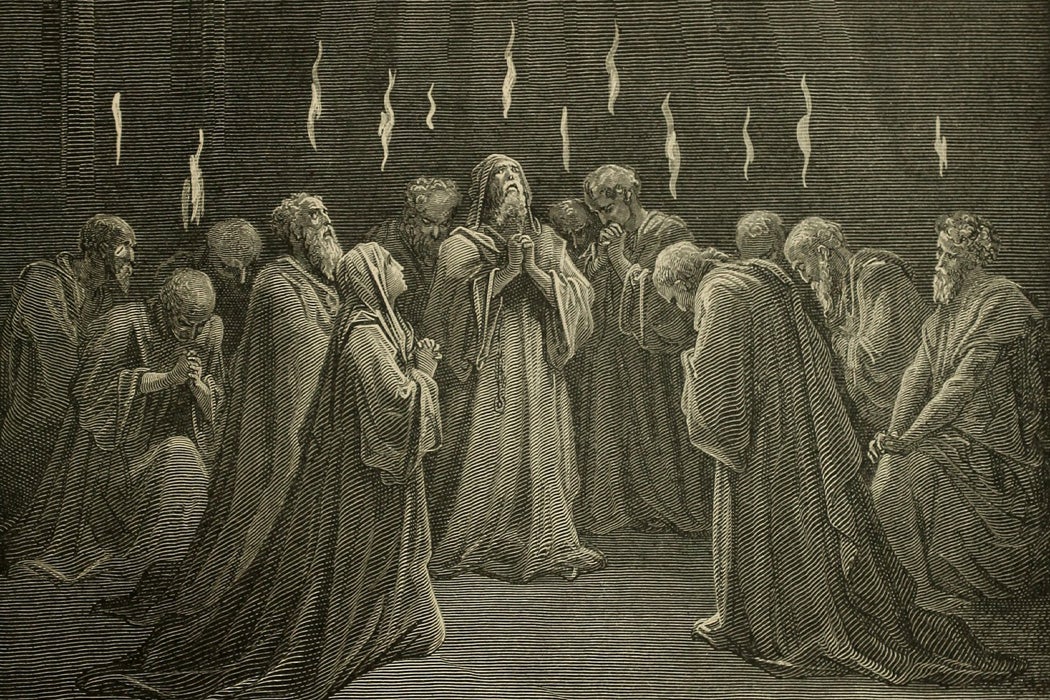 Stories about the undead can take on a variety of meanings: They offer ways of thinking about the plague or about consumerism; or warnings about dangerous science; or thought experiments about human nature. As the historian Nancy Mandeville Caciola writes, for at least one medieval European bishop, they were proof of the Christian resurrection.

Between 1013 and 1018, Bishop Thietmar of Merseburg wrote an eight-volume history glorifying the expansion of the German Christian Ottonian realm into pagan, Slavic lands. Among these writings were several stories of the living dead.

Eventually, the dead haul the priest to the altar and incinerate his body “down to a fine ash.”

The first of these stories took place in the town of Walsleben, which had recently been rebuilt after a devastating massacre. Thietmar describes the town’s priest arriving at the church cemetery to perform a ceremony at dawn only to find “a great multitude” of the dead. They were making offerings to a dead priest, who was standing at the sanctuary doors.

“One of them, a woman whom he knew well and who had died recently, asked him what he was doing there,” Thietmar writes. “After he told her why he had come, she returned that everything had already been taken care of by them; and also that he did not have long to live. He reported this to his neighbors, and it turned out to be true.”

A spooky story, but not as horrifying as another of the bishop’s tales, in which a priest is ordered to guard a church in which dead people make offerings and sing at night. Eventually, the dead haul the priest to the altar and incinerate his body “down to a fine ash.”

These stories, featuring devout yet murderous zombies who rise from their grave without waiting for the second coming of Christ, bears little resemblance to any Catholic doctrine. Yet Thietmar insisted that he told the story “so that no one who is faithful to Christ may doubt the future Resurrection of the dead but may proceed to the joy of blessed immortality zealously.”

Caciola writes that it’s not surprising that these stories come from the Mereseburg area, where many people practiced traditional Slavic ancestor worship. She argues that either Thietmar or whoever he got his spooky stories from was harnessing pagan ideas about life and death to the Christian idea of bodily resurrection.

For people along the physical frontier where Christianity met paganism, various supernatural logics mixed in surprising ways. Caciola suggests that “the majority of medieval people who believed that they had had direct experience of the supernatural realm, did so in intimate confrontation with dead human beings, rather than through encounter with a transcendent Deity.”

She writes that this particular case was one example of a phenomenon that occurred all over medieval Europe (and, later, across the world, wherever Catholics colonized people of other religions). “The Catholic Church, for all its careful policing of dogma, was unusually tolerant off a wide spectrum of ideas about death and afterlife,” she writes. “It is striking that stories of ghosts and revenants, for example, while not quite orthodox, never were declared heretical either.”