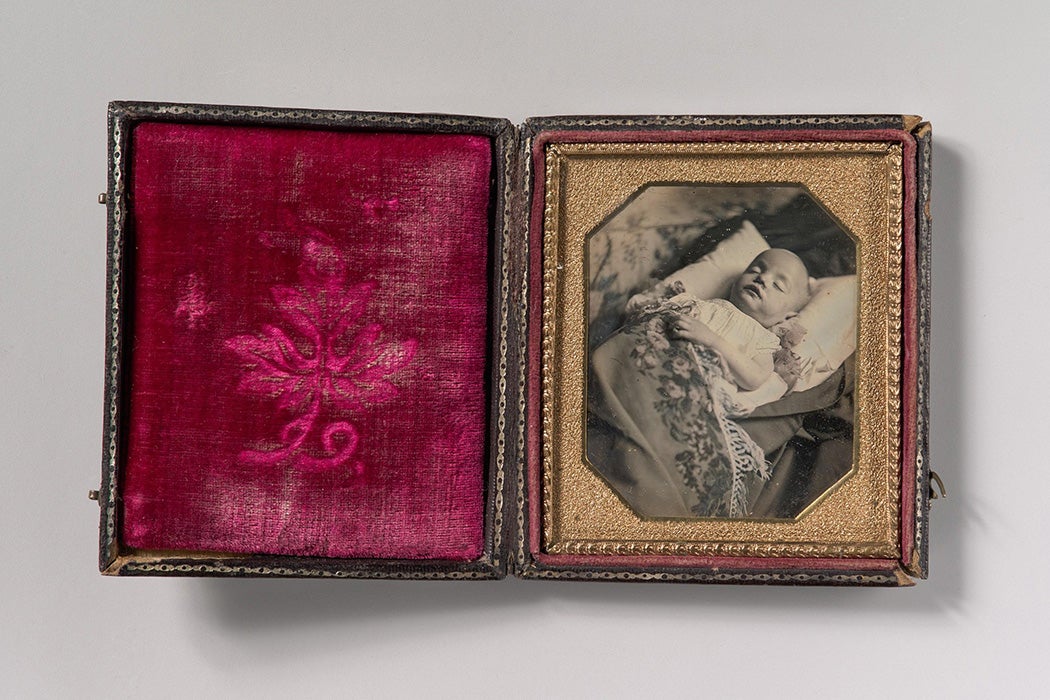 A daguerreotype of a postmortem baby, partially covered by a flowered shawl
via JSTOR
By: Ashawnta Jackson
3 minutes
Share Tweet Email Print

What does it mean to remember? For some, remembrance means capturing an image, documenting not just a life, but a death. In the nineteenth century, photographers were often called upon to do postmortem photography, capturing the stillness of the final moment.

As Victorian-literature scholar Nancy M. West writes, “people were more willing to pay a few dollars for a daguerreotype that memorialized a loved one’s death than they were to commemorate a marriage or birth.” The reason was simple: death was omnipresent. There were outbreaks of highly communicable, and deadly, diseases, and “when scientific discoveries shattered conventional religious beliefs…many embraced the medium [of photography] as a means of counteracting death. If their lives were to be tenuous, their image at least could endure.”

Honoré de Balzac, for example, believed that each image removed a layer of skin from the subject, decreasing their “essence of life.”

Part science, part illusion, a permanent reminder of a temporary moment—early photography had a sort of magic to it, West explains. In the 1840s, she continues, “an entire vocabulary developed around the medium,” a language that encompassed both fear and delight. Many people considered photography blasphemous, an art that “attempted to outdo a job reserved for the Almighty.” Some people even thought that photographs were physically dangerous. Honoré de Balzac, for example, believed that each image removed a layer of skin from the subject, decreasing their “essence of life.”

The tension between the desire to hold on to the dead and the fear of photography’s power likely also increased the demand for images of the deceased. In Britain, for example, the 1850s saw a rise of advertisements for postmortem photographers “and the production of special albums and cases for holding and displaying postmortem photographs,” according to researchers Liz Stanley and Sue Wise. As photography evolved, more people sought it out as part of the grieving process. As Stanley and Wise point out, it became a way to mourn, helping people come to terms with the death.

In some communities, capturing death took on a different meaning. Photographer James Van Der Zee, a Harlem photographer who captured the lives—and deaths—of the neighborhood’s Black community, used his art to document beauty. As literature scholar Carol E. Henderson writes, Van Der Zee’s 1978 collection The Harlem Book of the Dead, which featured his funeral photography from the 1920s as well as poems and text by poet Owen Dodson and artist Camille Billops, was part of a long line of Black artists using their work to “preserve themselves, their families, and their human dignity in the face of overwhelming odds.” Van Der Zee’s work, Henderson continues, suggests “that African Americans have long used death to investigate social injustice and cultural immorality in the past and present.”

Though it may feel as if postmortem photography is a relic of a bygone era, it is still part of the grieving process for many. Rather than a holdover from an earlier time, Stanley and Wise explain, it is part of the human condition, a need to capture a moment where a person is both here and not here, “a holding on, and also as a sign of having to let go.”