The Complications of “Outlaw Country”

Johnny Cash grappled with the many facets of the outlaw archetype in his feature acting debut, Five Minutes to Live. 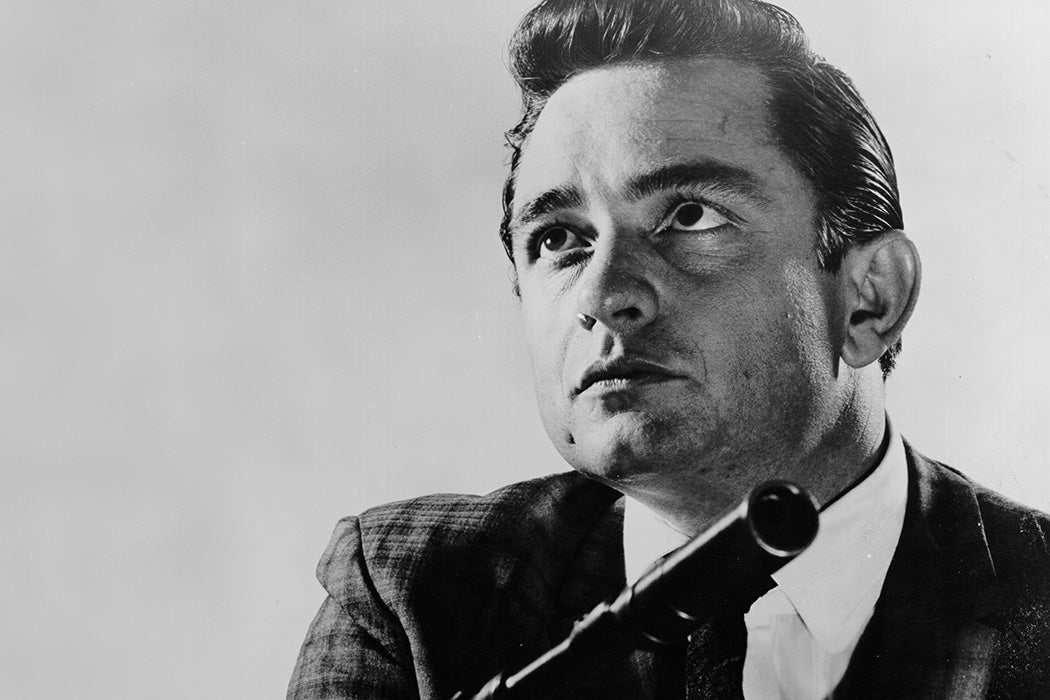 Johnny Cash poses for a portrait for a publicity shot for Five Minutes To Live on August 3, 1960 in Los Angeles, California.
Getty
By: Kristin Hunt
5 minutes
Share Tweet Email Print

Kris Kristofferson was “nobody’s best friend,” according to a 1970 New York Times profile of the singer-songwriter and actor. Something of an “odd man out” in Nashville, everyone told him to move to New York or Los Angeles, where his music made more sense. But he stubbornly stuck it out, building a movement in country music with like-minded artists that was soon dubbed “outlaw country.” The label suited Kristofferson, a former Rhodes scholar who had roundly rejected his more genteel origins. He was a heavy drinker, and, by his own admission, not very nice.

In 1970, he was also crossing over into film. At first, he wrote and performed on movie soundtracks, but shortly after began acting, portraying misunderstood musicians and renegades just like him. In this way, Kristofferson was actually a conventional country star. From Johnny Cash to Dolly Parton, country musicians who go Hollywood tend to replicate the outlaw figure that appears in so many of the genre’s songs, extending this mythology to the silver screen and reinforcing their image as the odd man (or woman) out.

“The outlaw, as a figure who exists outside the mainstream society either by choice or by force, is painfully aware of his outcast status.”

Country music has long been fascinated with outlaws—and not just literal ones like Billy the Kid. It also includes the more figurative kinds: petty criminals, cads, rabble-rousers, and others who exist on the margins of “polite” society. Personal biography may have played a role in some cases: Merle Haggard and David Allan Coe both served time in prison, while Waylon Jennings and Willie Nelson narrowly avoided it. But vice was baked into the culture, at least by the 1940s: as the historian James C. Cobb notes in Southern Cultures, “World War II-era ‘honky tonk’ was a music born in the midst of drinking, dancing, and often brawling.”

Country artists, particularly those of the “outlaw country” movement, offered contradictory commentary on these wily types, who could be romanticized and criticized in the same song. “The outlaw, as a figure who exists outside the mainstream society either by choice or by force, is painfully aware of his outcast status and often feels unworthy of the attention he receives from women,” musicology professor Travis D. Stimeling writes in Popular Music. Stimeling continues:

The Outlaw artists were frequently depicted as wild-eyed, hulking figures living in a world in which women… were at once the saviours of these out-of-control men and the very forces that propelled them to lose control in the first place.

According to scholar Jonathan Silverman, country musicians’ fashion choices also sent mixed messages. Although Johnny Cash dressed in black “seemingly [as] a form of cool,” as his struggles with drugs and alcohol became more public, Silverman writes, Cash’s clothes took on their “more cowboy definition, that of evildoer.”

Cash grappled with these complications in his feature acting debut, Five Minutes to Live. The film cast Cash as Johnny Cabot, a career criminal who plans to rob a bank to get back in the game. Frank Sinatra had just made a similar turn in Ocean’s 11. But Five Minutes to Live isn’t a charming heist movie, and Johnny Cabot is no Danny Ocean. He has a sadistic streak, gleefully terrorizing his hostage with gunshots that graze her face and threats of sexual assault. Clearly, Cabot has no qualms about killing an innocent woman, but he does have one code: no kids. When he thinks a cop has accidentally shot a young boy, he goes down in a rampage, charging the police to “come get me and this kid you killed.” Cabot is too cruel to embrace as an outlaw hero, more of an evildoer than a rebel, but his death proves he’s not entirely devoid of empathy, either.

The rising male country stars of the 1970s gravitated towards roles as gun-toting cowboys (Nelson in Barbarosa, Kristofferson in Pat Garrett and Billy the Kid) and musicians struggling with authenticity or addiction (Jennings in Nashville Rebel, Kristofferson in A Star Is Born), choosing parts that further reflected the outlaws of their songs in film. Yet as Dolly Parton’s movie career illustrates, even female country stars got in on the outlaw act. The rules were just a bit different for them.

In 9 to 5, Parton plays a personal assistant scheming to get even with her harassing boss. She and her coworkers know traditional law enforcement in this case (the police or HR) won’t help them, so they haven’t bothered involving them, making the trio vigilantes who exist above the law. Parton’s Doralee even transforms into a cowgirl in one fantasy sequence, where she dreams of giving her boss “a taste of his own medicine” by harassing and lassoing him in the office.

If 9 to 5 cast Parton above the law, The Best Little Whorehouse in Texas placed her against it. Everyone in town knows the brothel that Mona (Parton) runs is illegal, but it’s such a nice place and she’s such a nice madam that they’ve collectively agreed to look the other way. The movie frequently softens Parton’s background by laying out all the brothel’s rules—no drinking, no tattoos for the girls, and most importantly, “nothing dirty going on”—and centering her monogamous relationship with the town sheriff. It shows us that Mona can be an outlaw, but she still has to be kind and respectable to excuse her transgressions. This burden of likability just isn’t a concern for her male counterparts, who can swindle, cheat, and harm with fewer limitations.

Onscreen outlaws look different depending on the scene. They can be tortured and self-loathing one moment, mischievous and self-assured the next. Mean, sweet, selfish, caring, they’re complicated creatures—just like the characters in Johnny Cash’s country songs.