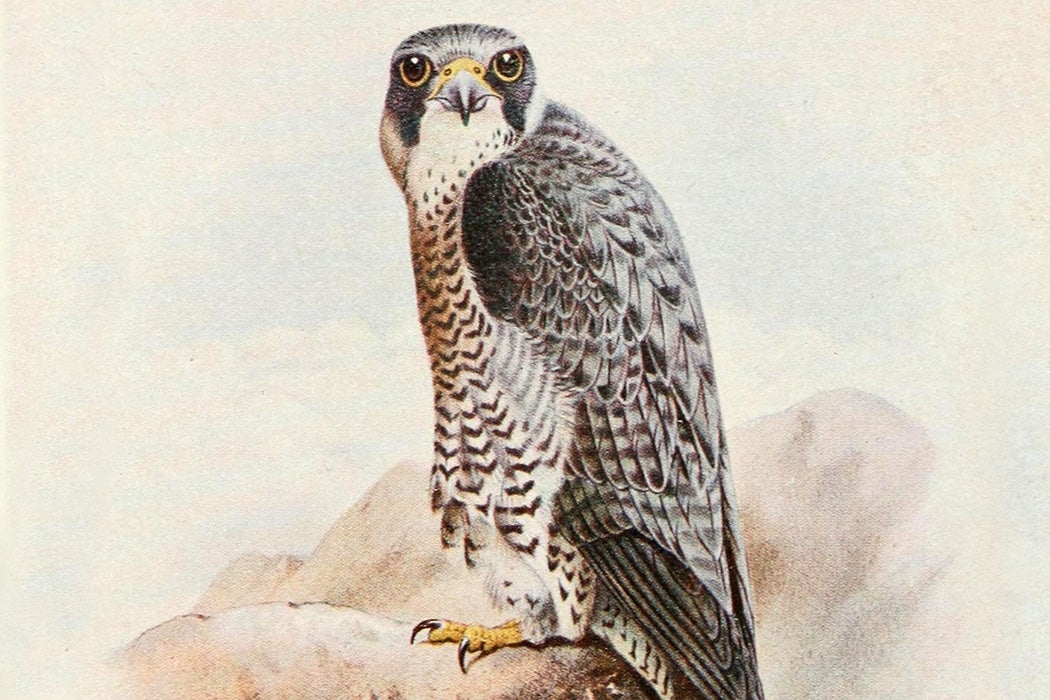 The recent news about the stunning decline in North American bird populations should remind us that we’ve been in similar situations before. A century ago, laws were enacted to stop the wanton slaughter of migratory birds for the fashion industry, which used feathers and even whole birds to decorate hats. And then, about fifty years ago, people began to realize that raptors like the Bald Eagle, Osprey, and Peregrine Falcon were disappearing.

The late toxicologist David B. Peakall, who was right in the thick of the mystery, details the race to find out why these and other birds were disappearing in Environmental Reviews. He also offers counsel on what to do about the grim trend.

Less than one-fifth of the mated pairs in 1961 and 1962 successfully raised young.

It started in Britain. In 1958, D.A. Ratcliffe published a note in the journal British Birds about the abnormal number of broken eggs he was finding in Peregrine eyries (long-established nests). Soon after, British pigeon fanciers petitioned the Home Office to relax the protected status of these falcons because, they said, there were too many of them threatening their pigeons. That set in motion a survey. The results surprised almost everybody: the Peregrine population in the British Isles had plummeted from pre-WWII levels. Less than one-fifth of the mated pairs in 1961 and 1962 successfully raised young.

The Peregrine is a cosmopolitan species, found everywhere except for Antarctica. The news of their decline in Britian sparked a similar American survey: in 1964, 133 known eyries were surveyed and every single one was found deserted. The species was essentially extirpated in eastern North America. What was going on?

Ratcliffe’s note about broken eggshells pointed the way to the answer. He would end up examining a lot of eggs:

The detective work involved in this aspect of the study was considerable. Although a large number of eggs collected before the war were available in public collections, most of the eggs recently taken were in private, illegal collections. Access to these collections had to be carefully arranged…

According to Peakall, not even WWII slowed down British egg collectors. (In fact, egg collectors in the U.K. remain a serious threat to endangered breeding birds to this day ) All of Ratcliffe’s data pointed to this: the eggshells were getting thinner. Parent birds were literally crushing their own eggs when they attempted to brood them.

The eggs of Peregrines and numerous other species in North America were then examined. It turned out that eggshell thinning in excess of 17-18% correlated to population declines. But what was causing the thinning?

This is where Peakall personally entered the story. Pesticides seemed like the obvious answer. Eggshell thinning started with the mass use of pesticides after the war, and bird population declines were “greatest in areas where pesticides were most heavily used.”

“By 1971, it was possible to show a correlation between the concentration of dichlorodiphenyldichloroethylene (DDE) in egg contents and the thickness of the shell.” (DDE is one of the things the pesticide DDT breaks down to in living organisms.)

The pesticide and agricultural industries (and their allies in the Department of Agriculture) weren’t having any of this. They followed the playbook of the tobacco industry (and, later, the fossil fuel companies): outright denial, attacks on the science and the scientists, sowing of red herrings and confusion, and plenty of lawyers.

“The story of eggshell thinning is one of the most comprehensive environmental investigations in the short history of environmental toxicology,” summarizes Peakall, whose own work found DDE in eggs in the U.S. as well. The more DDE, the more thinning. Some of those eggs had been sitting in museums for 25 years. The key was that even older eggs, eggs from the 1930s and early 1940s, did not have DDE residue.

Although the pro-DDT forces fought back furiously, the EPA would ban the pesticide in 1972, as would other authorities around the world. By then, in the eastern U.S. and southern Canada, there no longer was a Peregrine population to bring back from the brink. That subspecies, known as the Duck Hawk (for its tendency to prey on ducks), is no more. However, a captive-breeding and reintroduction program, using falcons from elsewhere in North America, proved highly successful. Today, breeding Peregrines can be found in cities like Atlanta, Chicago, Montreal, New York, and Providence, to name only a few. Sometimes, it seems, we can clean up our disastrous messes.