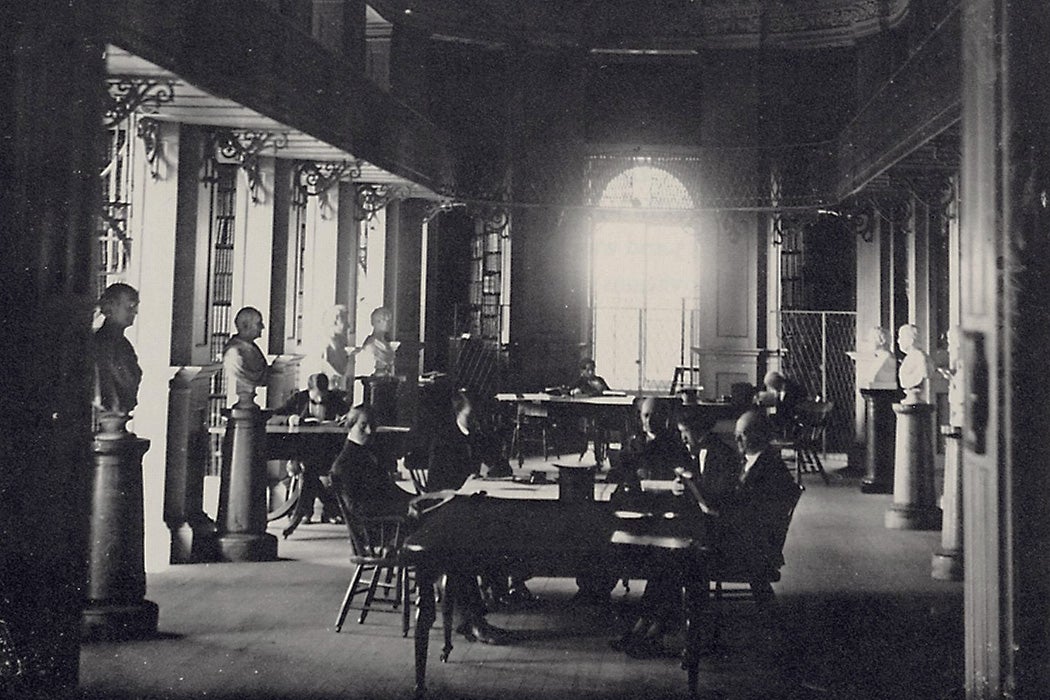 The address 10-1/2 Beacon Street in Boston, Massachusetts, hosts a building that demonstrates why Boston was (and still is) sometimes considered “the most European city” in the United States. Tourists and locals in search of literary culture will find it at the Boston Athenæum, founded in 1807. As promised by journalist John Clair Minot in 1928, “For a hundred and twenty years The Athenæum has been the embodiment of cultural and social Boston at its best.”

The Boston Athenæum was the brainchild of ambitious Harvard graduate Phineas Adams, who, with his business associates, decided to rent a set of rooms to host the meetings of their Anthology Society and print their miscellaneous magazine, The Monthly Anthology and Boston Review. They wanted to continue the free-thinking, scholastic atmosphere of Harvard outside of the university’s campus. The Athenæum, which gradually rose in popularity among Boston’s elite, changed locations several times before finally settling on Beacon Street which, true to its name, signaled intellectualism and economic prosperity in the rapidly developing city.

Its list of famous members could be mistaken for a university course syllabus.

The Athenæum was (and remains) a subscription-based library, an arrangement which allowed members access to its resources and services in exchange for a monthly fee (the circulation of books began only in 1827). The library became a social gathering place for local scholars, “men of business,” and members of the upper classes with self-education agendas. Its list of famous members could be mistaken for a university course syllabus: Ralph Waldo Emerson, Oliver Wendell Holmes Sr., John Quincy Adams, and Nathaniel Hawthorne, who practically resided in the reading room.

“Reading was not all he [Hawthorne] did there,” writes American literature scholar Glen MacLeod, “for the Athenaeum was more than just a subscription library. It was also designed to be a ‘repository’ for the ‘fine and pleasing arts’ that ‘shall provide for the improvement and emulation of artists and for the correction and refinement of taste in those, who aim to be connoisseurs, and able to bestow praise and censure with discrimination.’”

Though women weren’t barred from the library, their numbers were few in the first century of the Athenæum’s existence. Hannah Adams (1755–1831) was the first female member of the library, though other exceptional women were allowed to use the collections without membership. Louisa May Alcott, author Little Women, was a “reader,” given access to the collections via her uncle, and journalist and women’s rights advocate Margaret Fuller took advantage of the Athenæum’s collections to improve her knowledge of art and aesthetics. The Imagist poet Amy Lowell, whose family refused to pay for her to attend college, used the library as a substitute for a post-secondary education. It was there she indulged in her passions for literature and art. She was so grateful for the Athenæum’s existence, she even wrote a poem about it. In this sense, it can be argued that the Boston Athenæum’s history is partially feminist.

Recently renovated and expanded, the Athenæum operates as a museum, with some 100,000 rare books, an expansive art collection, relics from the American Civil War (in which Massachusetts fought on the side of the Union), exhibition galleries, and auditoriums for public concerts and lectures. Visitors who feel the urge to continue to read and learn after a tour of the building and its treasures will have no trouble finding a bookshop nearby. Boston in the twenty-first century, as in the nineteenth century, is still filled with bibliophiles. As proven by the Athenæum’s history and membership list, you can attend Harvard for a degree, but you don’t need to attend it to obtain an education.

Editor’s Note: This article has been updated to correct a typographical error. An “s” was added to “women’s rights.”