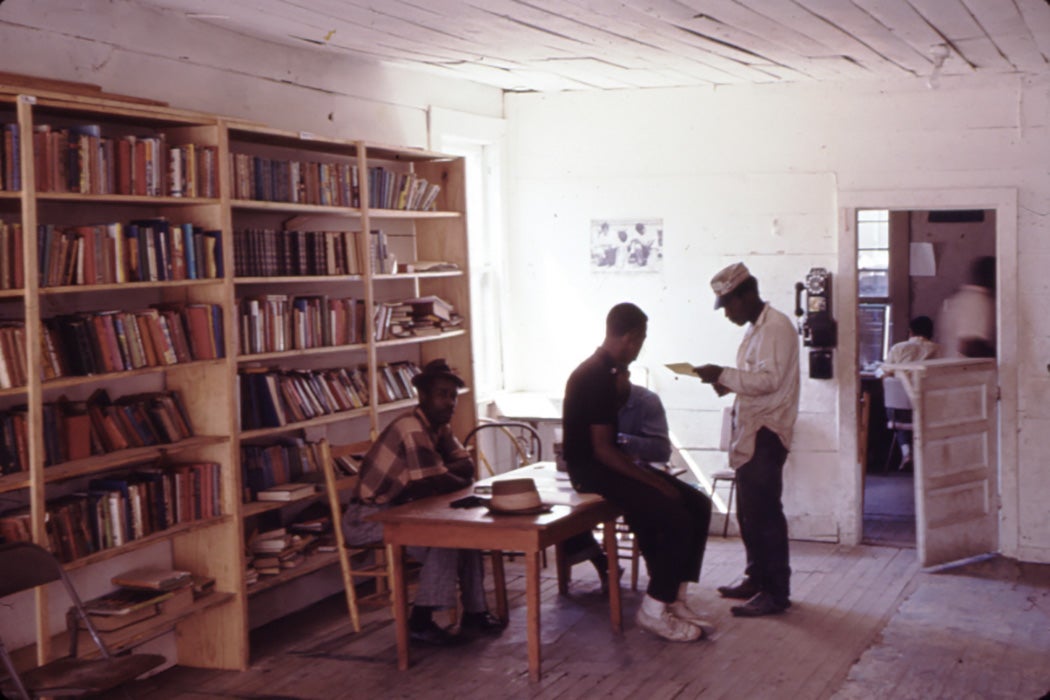 In his acceptance speech at the National Book Awards in 2016, Congressman John Lewis spoke of his youth, and his love of books and reading. “I remember in 1956, when I was sixteen years old,” Lewis recalled. “Some of my brothers and sisters and cousins going down to the public library and trying to get library cards, and we were told that the library was for whites only.” Lewis’ experiences as a teenager in Alabama echoed those of Black people of all ages across the country. Libraries were as exclusionary as any other in Jim Crow era America.

Prior to Plessy v. Ferguson (the “separate but equal” ruling), library scholars Maurice Wheeler, Debbie Johnson-Houston and Billie E. Walker point out, libraries didn’t allow Black patrons at all “except to return or collect materials for white patrons.” And Black people were “beaten, arrested, and often lost their jobs for attempting to register for library cards.” Once segregation was the law of the land, Black people advocated for their right to library services. Solutions came in many forms: Black branch libraries, segregated libraries where, as historian Stephen Cresswell writes, “despite the shared building, the entrances, reading rooms, and book collections were all rigidly segregated.”

While there were freedom libraries all over the South, “the vast majority, approximately fifty, were located in Mississippi.”

There were also Black-only library days, and rules which “permitted Blacks to come in and check out books but not to read magazines, browse, or take notes.” But perhaps one of the lesser-examined ways that Black citizens found solace in libraries was through the development of “freedom libraries,” libraries created in the South in the mid-1960s that provided Black residents “access to relevant informational and educational materials of high quality,” explains library and information science scholar Suzanne M. Stauffer.

Freedom libraries were started by the Council of Federated Organizations (COFO), a civil rights supergroup made up of the Student Nonviolent Coordinating Committee  (SNCC), Southern Christian Leadership Conference (SCLC), Congress of Racial Equality (CORE), and the National Association for the Advancement of Colored People (NAACP). COFO was also responsible for the Freedom Summer actions of 1964. While there were freedom libraries all over the South, “the vast majority, approximately fifty, were located in Mississippi,” Stauffer writes.

These libraries were housed in spaces ranging from “church basements to private homes” with collections ranging from a few dozen to over 20,000. At their peak, there were more than 80 freedom libraries throughout the south. Freedom Summer workers requested books from people and organizations in the North to fill the shelves, but as Cresswell points out, many of these donated books may not have been an improvement, with one Mississippi library receiving “a primer on the Esperanto language, annual reports of the Smithsonian Institution, fifteen-year-old science texts that had been heavily written in, and pre-1929 books on the American economy.” A later campaign to collect books, this time led by CORE, resulted in “approximately 2500 new books about the Negro people, Africa, and social commentary … along with 300 Hootenanny records.”

One freedom library organizing committee saw their work as helping “the Negro people gain the dignity of full freedom and equality.” Freedom libraries created safe spaces for Black communities, spaces where they could learn, develop, and explore. In closing his speech, Lewis— with tears in his eyes—reminded us all that it was never just about books.