The Black Nurse Who Drove Integration of the U.S. Nurse Corps 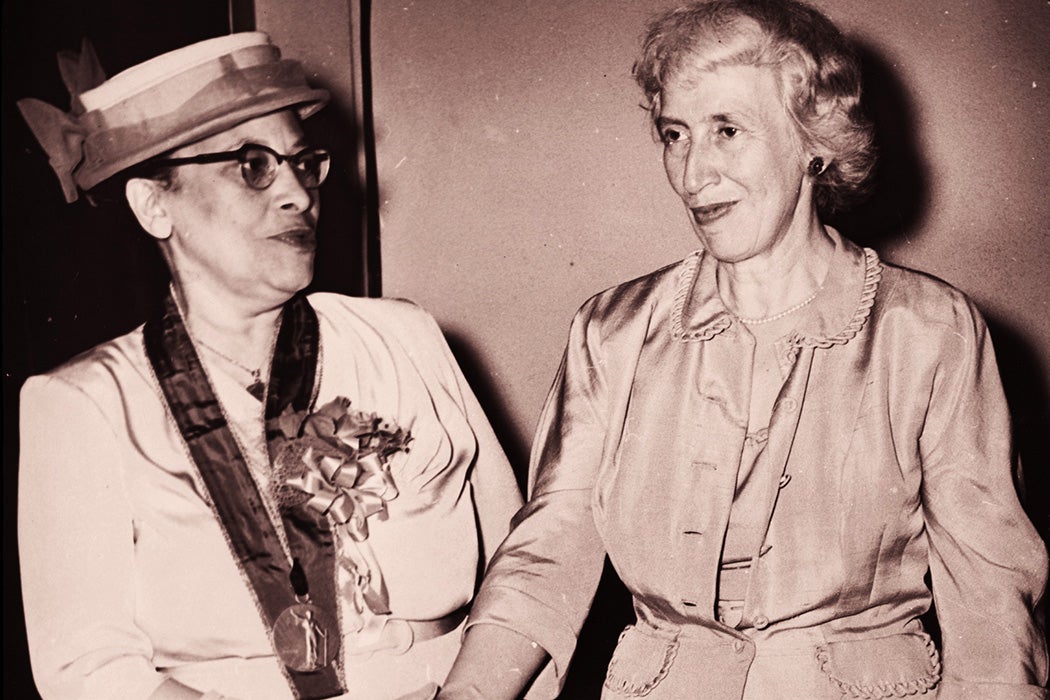 As the United States entered the final year of World War II, Surgeon General of the Army Norman T. Kirk told an emergency recruitment meeting of 300 people in New York City that, to fully meet the needs of the Army, the time had perhaps come to institute a draft for nurses. For Mabel Keaton Staupers, executive secretary of the National Association of Colored Graduate Nurses, this was too much to bear. According to the historian Darlene Clark Hine, Staupers stood up and challenged Kirk: “If nurses are needed so desperately, why isn’t the Army using colored nurses?”

Staupers had been asking that question long before the U.S. entered the war. Until 1941 neither the Army nor Navy Nurse Corps accepted black nurses. Staupers became a powerful voice and the public face for the civil rights of black nurses. As the war progressed, the War Department made small steps toward integration, gradually allowing a trickle of black nurses into the Corps, mostly to keep Staupers and her colleagues mollified. But Staupers would not settle for anything less than full integration.

Staupers honed her skills for organizing, networking, and mobilizing people into action over the course of fifteen years of building up medical infrastructure for black health care providers and patients. When she joined the National Association of Colored Graduate Nurses (NACGN) in 1934 as its first Executive Secretary, it was on life support. Founded in 1908, the NACGN sought to advance career opportunities for black nurses and break down racial barriers in the profession. But over the years, membership dropped, and it lacked stable leadership and a designated headquarters. At the same time, black nurses all over the country were feeling the financial distress of the Great Depression, compounded by the professional exclusion that sidelined them in favor of white nurses.

Despite its organizational problems, the NACGN’s objectives were as urgent as ever. With Staupers as executive secretary and Estelle Massey Osborne as president, the NACGN underwent an overhaul. Staupers later recounted the successes of these formative years, including the establishment of permanent headquarters in New York City, a Citizens Advisory Committee, and regional locations; a 50 percent membership increase; and key allyships with other black-led organizations and white philanthropists.

Revitalized, the NACGN had garnered enough strength and support to attempt to break down racial barriers in one of the country’s most venerated institutions, the Armed Forces. When hostilities broke out in Europe, Staupers began corresponding with the Army Nurse Corps, opening discussions about integration. These discussions initially went nowhere, but in 1940, Staupers was invited to sit on the National Nursing Council for War Service and subcommittee on Negro health with the Federal Security Office of Defense, Health, and Welfare. Still, she was just one voice among many, and to ensure that black nurses were more fully recognized and heard, she harnessed the NACGN network and formed the NACGN National Defense Committee, making sure membership reflected each region of the country.

On October 25, 1940, Surgeon General of the Army James C. Magee (Kirk would take his place in 1943) announced that the War Department would admit black nurses in the Army Nurse Corps, though the Navy would still recruit none. Staupers and the NACGN received a promise of a 56 black nurse quota. Typically, the American Red Cross would supply the Armed Forces with nurses from the American Nurses Association (ANA), but since black nurses were denied membership in the ANA, the American Red Cross would screen and accept members of the NACGN instead.

For Staupers, the limitations on black nurses to serve was a failure to recognize black women as full citizens.

When the U.S. entered the war, mere months later, following the bombing of Pearl Harbor, the American Red Cross asked for 50,000 recruit nurses for its First Reserve. A December 27, 1941 report from The Pittsburgh Courier said that the promised 56, compared to the requested 50,000, now looked like “a drop in the bucket.” Under the headline “Wide Indignation Aroused by Unfair, Jim-Crow Condition,” the report cited Staupers saying the already small quota had yet to be recruited: “[U]p to about ten days ago this quota had not yet been filled in spite of the availability and readiness of our nurses to serve.”

To make this “drop in the bucket” seem even smaller, the 56 black nurses were expected to only care for black soldiers, with both nurses and soldiers being segregated by race in separate wards. The need for black nurses was therefore contingent on the building and availability of separate wards. Further conjuring an analogy to Jim Crow, black nurses were to be sent to wards in the South, where most black soldiers were stationed. According to Hine, the War Department held the line that this policy was “segregation without discrimination.”

To protest the military’s discriminatory policy, Staupers called together her NACGN National Defense Committee to meet with Magee, who remained unmoved in his and the War Department’s stance on segregation within the Nurse Corps. For Staupers, the limitations on black nurses to serve was a failure to recognize black women as full citizens. In her memoir, No Time for Prejudice, Staupers recalls her words to Magee:

…since Negro nurses recognized that service to their country was a responsibility of citizenship, they would fight with every resource at their command against any limitations on their service, whether a quota, segregation, or discrimination.

When advocacy through established political channels fell short, Staupers, adept at mobilizing communities, turned to the black press, which played a key role in bringing the racist policies of the War Department to the public eye. Throughout the war, Staupers gave interviews and sent NACGN press releases to keep the ongoing racial discrimination in the War Department in public view. A March 1942 issue of Norfolk, Virginia’s New Journal and Guide quoted a letter to President Roosevelt signed by Staupers and other black civil rights leaders, asking, “What, Mr. President, is the Negro to hope and fight for?”

Little by little, the Army Nurse Corps recruited more black nurses, but their numbers still remained low—only 247 by the end of 1944. And in addition to being segregated in black wards, these nurses had also been relegated to caring for Nazi prisoners of war. Addressing both issues, Staupers sent a letter to the New York Amsterdam News, writing:

The National Association of Colored Graduate Nurses is deeply concerned lest the public misunderstand the reason for the small number of Negro nurses. We do not want the impression given that in a crisis and at a time when Nursing Service is vital to the needs of the Military, the Negro Nurse had failed her Country.

By late 1944, the U.S. had been in the war for three years, black nurses had received few gains, and morale was low. Staupers’ friend, the civil rights leader Anna Arnold Hedgeman, relayed the problems to First Lady Eleanor Roosevelt, who invited Staupers to meet with her for half an hour at her New York apartment on November 3.

At the meeting, Staupers detailed the nurses’ segregation and the reluctance of the Army to accept more recruits, while the Navy still took none. “Mrs. Roosevelt listened and asked the kind of questions that revealed her keen mind and her understanding of the problems,” Staupers later wrote. Shortly after the meeting, conditions for black nurses improved in the POW camps, and some were transferred to camps in California, where they were treated better by the Army Nurse Corps. Staupers was convinced this was the influence of the First Lady.

After the war, no branch of the Armed Forces Nurse Corps reinstated the “segregation without discrimination” policy.

Then, in early January 1945, just days after Norman T. Kirk clashed with Staupers, President Roosevelt made his annual address to Congress on January 6. He urged them to amend the 1940 Selective Service Act to include the induction of nurses into the armed forces. Staupers’ response was swift and relentless. Once again, calling upon her networks and the press, she asked everyone sympathetic to the cause of black nurses to directly wire President Roosevelt, demanding that black nurses be included in the draft. In a report titled “Nurses Wire President on Draft Issue,” the New Journal and Guide listed numerous organizations that rallied behind Staupers and NACGN, including the NAACP, ACLU, National YWCA, and several labor unions.

Unable to continue ignoring the overwhelming public response, Kirk announced, on January 20, 1945, that the War Department would accept “every Negro nurse who puts in an application and meets the requirements.” The Navy followed days later, when Rear Admiral W.J.C. Agnew announced that they would also accept black nurses.

The war ended shortly after the announcement, on May 8, 1945. But before the end, 500 black nurses served in the Army, and four in the Navy. After the war, no branch of the Armed Forces Nurse Corps reinstated the “segregation without discrimination” policy. Three years later, in 1948, the ANA also integrated. Staupers became president of the NACGN in 1949. And after the two major victories, in the Armed Forces Nurse Corps and the ANA, she led NACGN in its voluntary dissolution, believing that it had fulfilled its objectives. Even though she recognized there was still much work to be done for true equality, “[t]he doors have been opened and [the black nurse] has been given a seat in the top councils,” she wrote upon NACGN’s dissolution. “The progress of active integration has been well started.”

For her work toward racial justice in the nursing profession, Staupers was awarded the Mary Mahoney Medal, named after the first black nurse to earn a degree in the U.S., by the NACGN for distinguished service in 1947. This was followed by the Spingarn Medal, the highest honor awarded by the NAACP, in 1951, for “spearheading the successful movement to integrate Negro nurses into American life as equals.”

“United in a common cause for the benefit of humanity, all nurses can work together,” Staupers wrote, “sharing opportunities as well as responsibilities, to the end that this world of ours may become increasingly better.”