The Accidental Presidents of the United States

How “accidental” world leaders have faced the challenges of leading major democracies without being voted in. 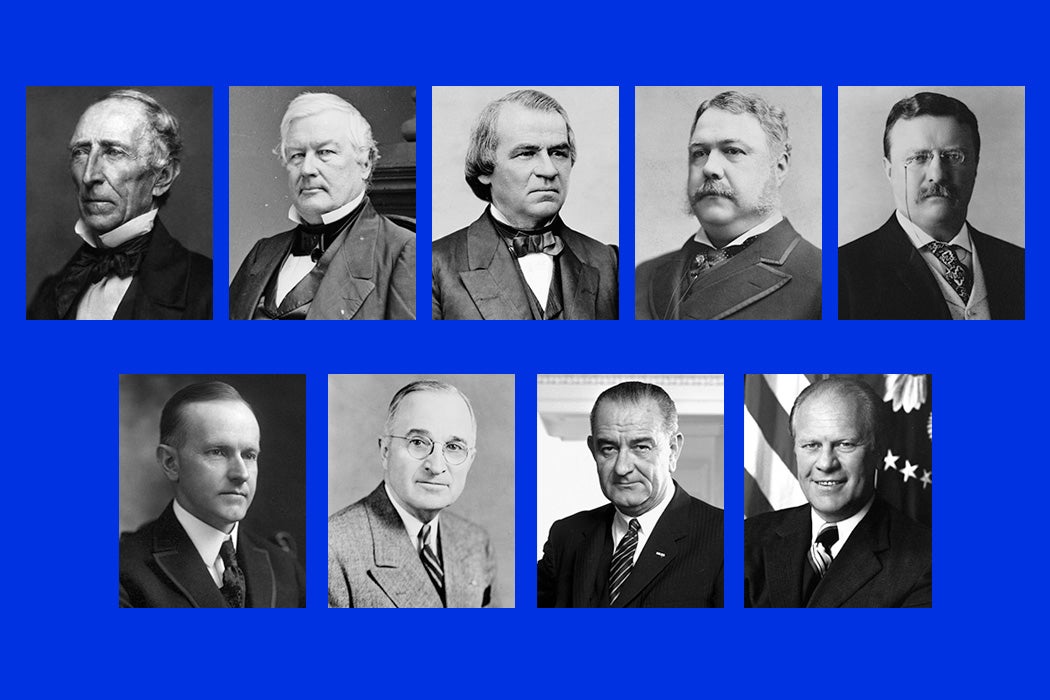 As Theresa May tearily announced her departure outside 10 Downing Street to the British public, she served as a symbol of the personal and professional challenges faced by those put in the impossible position of inheriting leadership, rather than choosing it.

May faced the double challenge of having to manage the formidable charges given to any state leader (including, in her special case, the Gordian knot that is Brexit), without the popular support of an electorate. She was awkwardly shuffled into power after her predecessor, David Cameron, suddenly resigned, and her party scrambled to find a replacement.

As anyone voting for president knows, the vice president is often like an insurance policy you never expect to claim.

It’s a position for which democracy is ill-prepared. The democratic system has certain measures in place for when the people’s choice somehow fails them through death, accident, injury, or self-selects out of the position of power. However, as anyone voting for president knows, the vice president is like an insurance policy you never expect to claim.

Nonetheless, through American history, there have been nine “accidental presidents,” as scholar Philip Abbott calls them in Presidential Studies Quarterly. Presidents Tyler, Fillmore, Andrew Johnson, Arthur, Theodore Roosevelt, Coolidge, Truman, Lyndon Johnson, and Ford all wrestled with unique challenge of proving themselves to be presidential material despite already being president.

These accidental presidents have had varying levels of success. Two are among historians’ most highly ranked. Four are among the worst remembered. Four were not nominated by their own parties for another term, and three others voluntarily gave up the opportunity.

Nonetheless, thrust into the role, all nine had to work to establish their legitimacy. Abbott draws some similarities between their various strategies:

The Homage Strategy: Some accidental presidents choose to lean heavily on the virtues of their predecessors, understanding the public’s (and their own party’s) deep emotional ties to their previous president-elect—like Lyndon B. Johnson, despite his known tensions with the Kennedys.

The Independent Strategy: All presidents, even those who begin their tenure by emphasizing the greatness of their predecessors, must eventually forge their own path. Some choose to do this sooner than others. Tyler—the first accidental president—chose to skip the homage to his predecessor and strike it out on his own. Tyler inherited the presidency from President William Henry Harrison, and, according to Abbott, quickly formalized his position by giving an inaugural address and moving into the White House. He then proceeded to infuriate other members of government by setting policies under his own agenda. While this seemed risky, there was a method to Tyler’s madness. As the first in his situation, he was in a unique position. To adhere too closely to the leader before him, or be too agreeable to his peers, may well have made him seem incompetent or timid, and significantly weaken his power.

The Minimalist Strategy: The minimalist strategy is what it sounds like—a cautious approach in which the former vice president acts as a steady caretaker, not concerned with blazing new paths or establishing a new form of leadership. Both Coolidge and Ford took this approach, with wildly varying degrees of success. The success of this strategy depends on the economic and political climate at the time; a quieter political atmosphere is much better suited to a quieter president.

What Abbott concludes, however, is that in each case and in each strategy, accidental presidents always somehow stumbled or struggled. After all, a leader needs integrity in the eyes of the populace, as well as their own political party, in order to establish complete legitimacy.

Theodore Roosevelt’s rhetorical arrangement of his relationship to the McKinley assassination, Coolidge’s construction of the “Silent Cal” persona, and Lyndon Johnson’s swift and systematic use of homage for his political agenda are all examples of the inventiveness available to accidental presidents. That despite many different instances of creativity, accidental presidents still fail in various degrees to fulfill the roles of rex and dux [i.e. legitimacy and leadership], is a valuable aspect of a theory of democratic succession, for the imagination of political leaders should always be tethered to election.

Accidental Presidents: Death, Assassination, Resignation, and Democratic Succession
By: Philip Abbott
Presidential Studies Quarterly, Vol. 35, No. 4 (Dec., 2005), pp. 627-645
Wiley on behalf of the Center for the Study of the Presidency and Congress 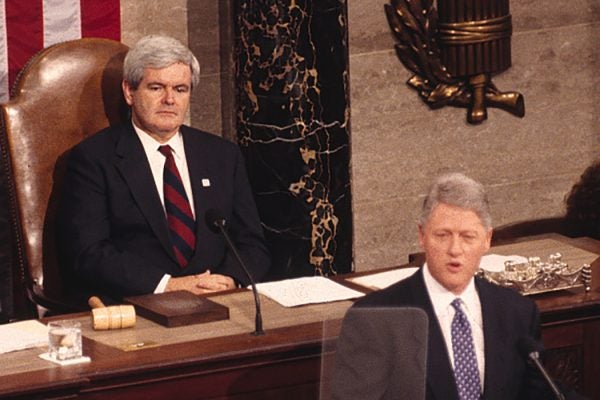 In 1994, Republicans swept the midterms and Newt Gingrich became Speaker of the House. His “Contract with America” was both polarizing and transformative.