With WWI coming to end, 1918 should have been a good year for the movies. Then along came influenza. 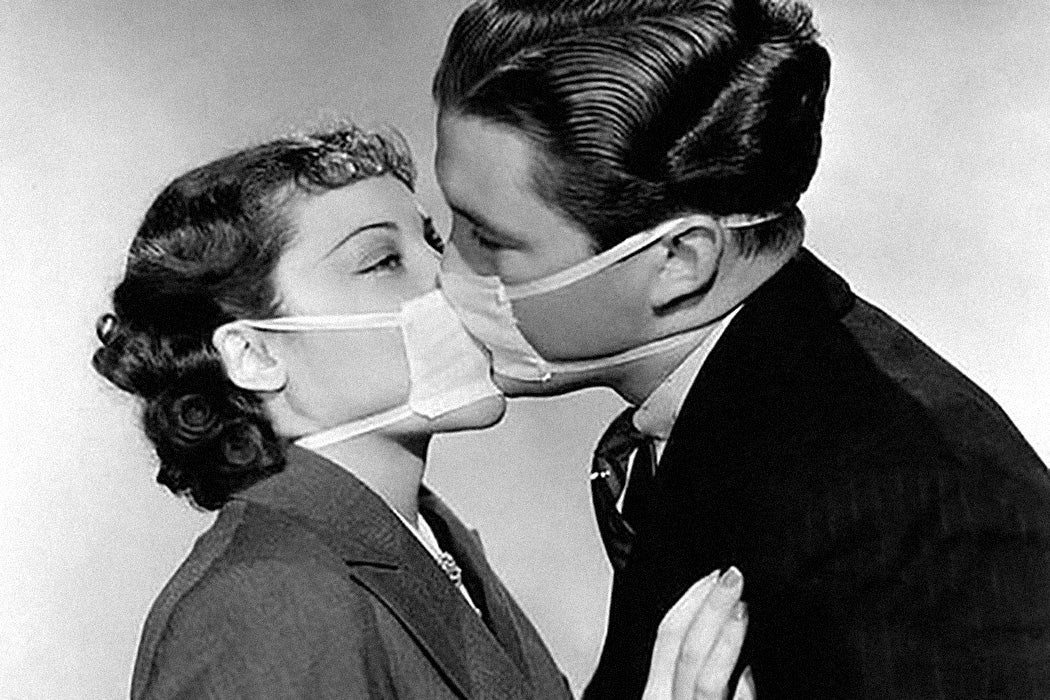 Actors Dennis Morgan and Betty Furness rehearsing a kissing scene for their movie Mama Steps Out, 1937. Yes, this picture postdates the 1918 flu pandemic, but it's so good!
via Wikimedia Commons
By: Betsy Golden Kellem
5 minutes
Share Tweet Email Print

With more than $700 million in revenue, Spider-Man: No Way Home is having an uncharacteristically large cinematic moment in the post-COVID world. As of this past weekend (1/23/22), Deadline reported the movie hit #6 on the global all-time box office list and had made $1.69 billion, inspiring a Saturday Night Live sketch in which the show’s Joe Biden stand-in attributes the nationwide rise in coronavirus cases to the fact that every human in the country has seen Spider-Man.

Jokes aside, Spider-Man is the first movie in a long while to suggest a return to pre-pandemic box office figures and theater attendance. Movies have been hard hit by two years of pandemic pressures, resulting in hybrid releases, “theater at home” streaming arrangements, and the closure of many theaters. After the influenza pandemic of 1918-19, which similarly hit the movies hard, the film industry responded with massive structural change and a booming return to filmgoing. Will our current environment and its aftermath spur the same sort of change?

As the war was coming to an end, there was every reason to expect a busy fall season in the amusement industry.

The year 1918 should have been a good year for the movies. War films and newsreels had kept theaters humming (film was considered an “essential industry” in World War I America), and as the war was coming to an end, there was every reason to expect a busy fall season in the amusement industry. But, after its initial discovery among military service members in the spring, and a mild first wave of infection, influenza took hold on the east coast in September 1918. Extending westward in the sort of six- to eight-week surges that have become all too familiar to us today, the pandemic roared across the United States and caused nearly two hundred thousand deaths in the month of October alone.

If attendance didn’t go down on its own as the flu raged through a given community, venue closures would eventually keep people out of the movies. According to film scholar Richard Koszarski, “Health officials would eventually order the closing of movie theaters along with other places of amusement, as well as schools, churches and (more rarely) stores.”

In October 1918, the National Association of the Motion Picture Industry decided to “abandon production as far as possible, stop the release of all new feature subjects and confine exchange activities to the immediate circulation of serials and news weeklies.” The shutdown was necessary from an economic perspective as much as a public health one: the American movie industry was a chain of relationships between the studios who made films, the exhibitors who showed them, and the ticket-buying public, and the pandemic affected them all materially. If studios weren’t making movies at the usual rate, and there wasn’t anyone to pay to rent the print, much less buy a ticket, the industry was left hard up.

For towns and cities in which theaters were still open, distributors were encouraging re-screenings of old films already in stock, and offered to make back-catalog features available to theater owners. In November 1918, the industry publication Motion Picture World reported that the official release of America’s Answer, a new WWI propaganda documentary produced by the Committee on Public Information, would be delayed “owing to the epidemic of influenza throughout the country and the fact that in many states the pre-release showings will be stopped by the closing of the motion picture theatres.”

Things did not look good for the future of the movie business. One Boston theater owner lamented that “The five best weeks of the year are those following Labor Day. The grip ban came in the midst of this rushing business, and the loss can never be recovered.” Others in the industry worried that since people under lockdown had figured out “that they can enjoy their own fireside of evenings,” they might not even want to return to reopened theaters.

Nonetheless, the industry recovered—and not only recovered, but boomed in new and unexpected ways. Benjamin Hampton, in his history of the American film industry, writes that there was only a matter of weeks for studios to ditch the war reels, start filming love stories and adventures, and capitalize on an audience of eager postwar pleasure-seekers who were either by now influenza-free, or willing to wear a mask. (Of course producer Thomas Ince complained that “[masks] interfere to a considerable extent with cigarette smoking,” but what are you going to do?).

This favored studio players with bold hearts and deep pockets. Adolf Zukor’s Paramount filled its coffers with Wall Street cash, and either bought or built first-run theaters in major cities across the nation in an effort to control films from the soundstage to the theater seat. Studios like fledgling Disney, which did not own theaters, were at a decided disadvantage in this system; and influential stars like Charlie Chaplin and Mary Pickford responded by forming their own United Artists consortium. (A 1948 lawsuit before the Supreme Court would ban this practice of “vertical integration” as placing a stranglehold on the production and distribution of movies.)

In the aftermath of the 1918-19 influenza pandemic, the movie industry responded with the structural changes that became the big studio system. We may be seeing a similar industry shift in progress today, as COVID realities evolve, and hybrid streaming and experiential theater experiences become more common. What will happen precisely is hard to know, but we do know that once again, a pandemic has irrevocably shifted the nature of the industry and its relationship with audiences.