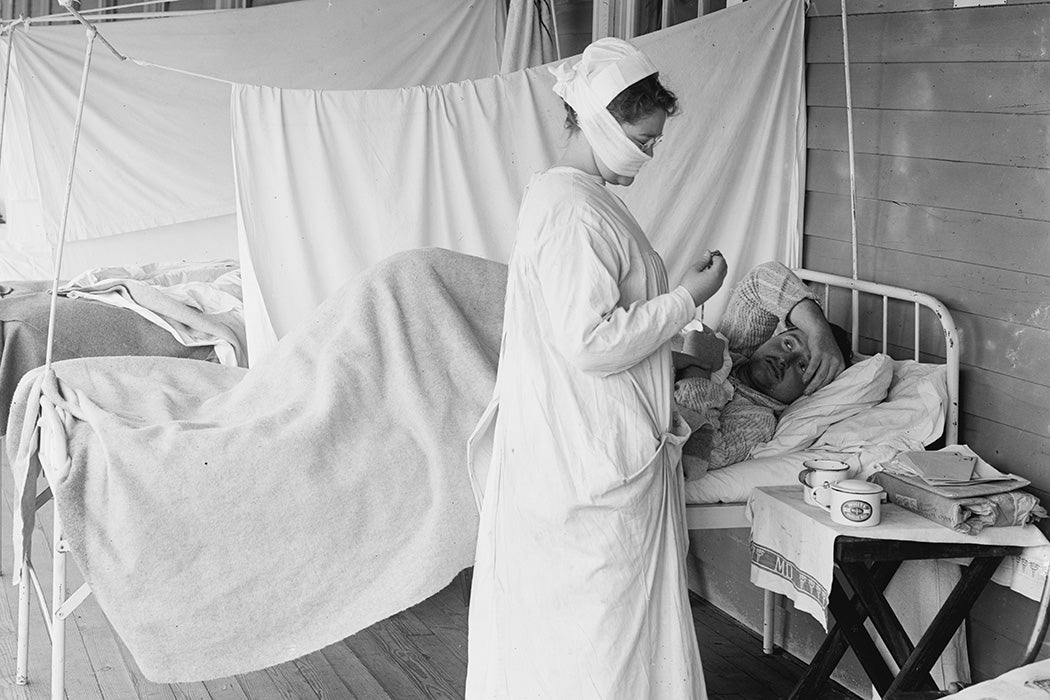 For all the devastation of pandemics, there is a historic forgetfulness around them. They are not events that get grand public memorials, and their tolls tend to be remembered individually, rather than collectively, by those who experienced loss.

It was this scarcity of historical on-the-ground experiences that the Rev. Francis E. Tourscher was thinking of in 1919, when he compiled first-hand accounts from nuns who had worked as nurses during the influenza outbreak that had just ravaged Philadelphia. Their stories filled over a hundred pages, published in installments in the Records of the American Catholic Historical Society of Philadelphia in March, June, and September. In an introduction, Tourscher wrote that it was important to “assemble facts while they are still a living memory”:

Facts unrecorded are quickly lost in the new interests of changing time. Incidents of personal experience, even the most touching and pathetic, pass away generally with the memory of those immediately concerned. We have little left now, beyond mere material statistics, and vague impressions drawn from “paper accounts” of the epidemic of cholera which visited Philadelphia in 1832. We know probably as much of the “Black Death” of 1348 in Europe or of the “Sweating Sickness” of 1529 in England as we do of the “Yellow Fever” which raged in our cities of the South, and threatened the North, in 1849 and again in 1854.

Philadelphia was the hardest-hit American city in the 1918 flu pandemic, and Tourscher concentrated on the events of October of that year. The city saw a huge spike of cases after organizers went forward with the September 28 Liberty Loan Parade, despite concerns from local medical experts about the disease’s presence in the population. Six weeks later, 12,000 would be dead.

What was really needed were more nurses, especially as medical workers themselves became ill.

The immediate effect was to overwhelm the healthcare system. Makeshift hospitals were set up in gymnasiums and event halls—large gathering spaces that were no longer needed as the city’s social life shut down. What was really needed were more nurses, especially as medical workers themselves became ill. On October 10, 1918, Archbishop Dennis Joseph Dougherty wrote a letter not only authorizing the opening of parish buildings to care for the sick, but also permitting uncloistered nuns to step in as nurses.

Sisters from across the city volunteered. They mostly did not have medical training, just the will to help. “I was struck, at first, with a fearful dread, for I never came in close contact with death but once in my life,” said one nun who worked at an emergency hospital on South Broad Street. “But realizing what must be done, I quickly put on my gown and mask.” Another described her first day, October 12, at Philadelphia General Hospital, a charity hospital in West Philadelphia:

That walk from the entrance to the wards seemed unending. One of the Sisters whispered to me: “How shall we ever get in?”—meaning the next day. I replied: “I think we’re getting in beautifully; what worries me is, how shall we get out?”

What they found there in the wards, as other Sisters did around the city, were bodies in every bed and not enough hands or resources to care for them. At an emergency hospital at Broad Street and Snyder Avenue, a Sister related how new patients would have to wait in an office until someone died and a bed was free. At St. Patrick’s Emergency Hospital, another Sister recalled, were “conditions beyond the power of description”:

It is one thing to read or hear of suffering, quite another to behold it in reality. About the Hall were arranged cots, containing men, on the first floor, women and children on the second. Nearly every race and condition were there represented.

Many of Philadelphia’s hospitals were segregated, and the Sisters performed essential work visiting the sick who were at home and had nowhere else to go and often no one to care for them. Frequently they were suffering as much from starvation and neglect as from the illness itself. One Sister remarked that it was “not always poverty that left the people destitute,” it was “the fear and dread of the scourge” that kept others away.

In crowded tenements, nuns discovered whole families who were sick, where bodies of the dead sometimes stayed for days as they waited for the overworked undertakers. The Sisters administered what assistance they could: cleaning, bringing food if needed, and, importantly, offering some humanity. One older woman “asked the Sisters to comb her tangled hair.”

While Philadelphia’s working-class and immigrant neighborhoods were particularly hard hit due to their close quarters and lack of access to healthcare, the flu knew no bounds of money or class. One man drove to the convent in his car to ask for help, because although “he had wealth at his command, he was unable to get a nurse for his dying wife and child.”

Some who were treated recovered, like an eighteen-year-old stenographer who fell into delirium so intense that she was strapped to her bed. Others did not, including a young soldier who had recently returned from fighting in France. Faith and the desire to give last rites to believers are constantly present in the Sisters’ narratives—they saw this work as part of their calling. Yet they cared for everyone, regardless of religion. They went into the humble apartments of the poor and the mansions of the rich. They went door-to-door to homes of strangers across the city. Many of them also got sick.

Most of the Sisters in Tourscher’s account are anonymous; he wrote that “self-advertising is alien to the spirit…of these women of Christian refinement.” But concluding the compiled accounts are several pages devoted to “Deceased Sisters” who died in the pandemic. Attention is given to each of their short biographies, such as Sister Mary Carina, who “did splendid work among influenza sufferers in St. Joseph’s Parish” and died on November 6, 1918, and Sister M. Inviolata, who, when “the call came for volunteers to nurse the epidemic victims at the Philadelphia Hospital,” had “offered her services generously,” and died on October 26, 1918.

October 1918 was a harrowing month for Philadelphia, but eventually new cases declined, the emergency hospitals closed, and the city returned to life. Coming off both the end of World War I and this pandemic, many survivors were eager to move forward. These accounts, recorded just months after the pandemic’s peak, are stories of empathy and selfless care. They were preserved so that they would be remembered, now a century later providing a chronicle of people who did what they could to help and lived through a terrible time that seemed like it would go on forever.