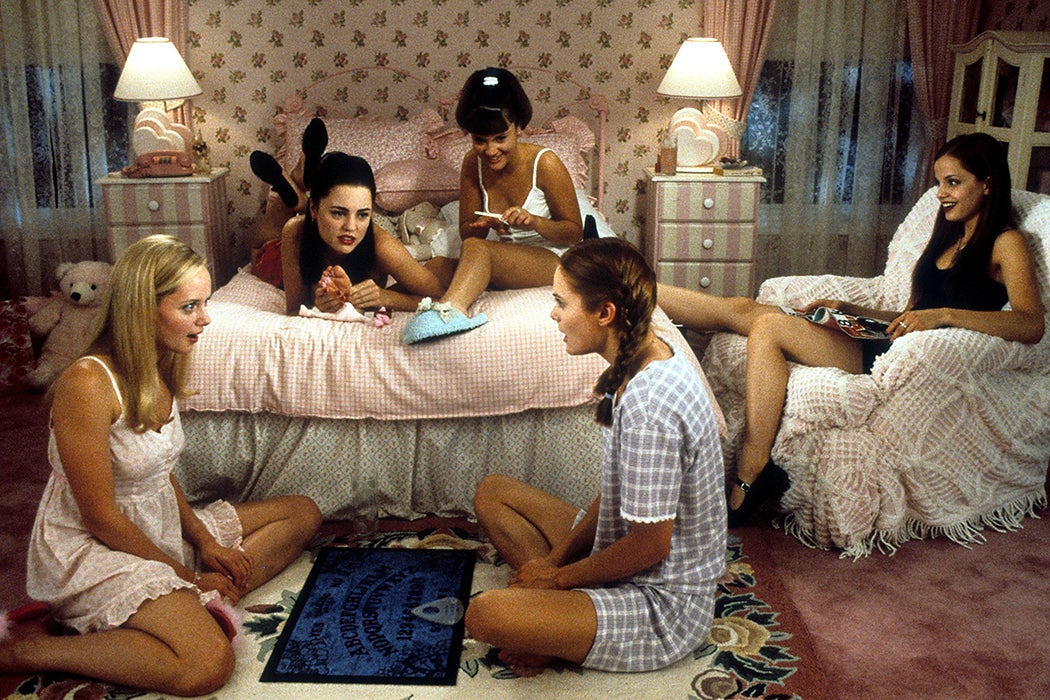 Marley Shelton, Marla Sokoloff and the rest of the girls at a sleepover in a scene from the film "Sugar & Spice," 2001
Getty
By: Ashawnta Jackson
2 minutes
Share Tweet Email Print

It’s late. Perhaps you’re in a basement, or a bedroom. Either way, you’re on the floor, eyes closed, hands at your side. Around you, your friends chant, “Light as a feather. Stiff as board” over and over until you feel the bounds of gravity release, and then, each using just four fingers, your friends lift you from the ground. Though each new generation and each new sleepover may feel as if they are discovering something new, this game is a form of folklore and folk tradition, Anelise Farris writes, passing down from generation to generation. Light as a Feather and other games known as “levitation play,” have been seen in some variation since 1665, explain researchers Barker K. Brandon and Claiborne Rice. Now sharing knowledge of these games happens the way most things do —online. Farris found that kids share these slumber party traditions through “numerous videos that had been viewed thousands of times. […] slumber party rituals are indeed alive and well.”

“The act of performing these rituals in itself involves a degree of belief in possibility.”

But why do so many of these rituals involve the supernatural or the occult? Why is there a need to chant into darkened mirrors, or lift a friend off of the ground with just a finger? First, Farris writes, it’s because they’re experimenting—particularly with something that is  “not deemed ‘appropriate’ or allowed in everyday life.” Kids are also experimenting with belief systems and discovering what they believe apart from their parents, and “the act of performing these rituals in itself involves a degree of belief in possibility.” In Farris’ interviews about slumber party rituals, one interviewee explained “We played them because it was exciting to be in the dark and freak each other out with our imaginations.” Slumber parties are a safe place to be afraid, to push boundaries. There is a sense of the space as being both independent yet supervised, and “it is this in-between state that allows for and encourages mystery, wonder, and experimentation.”

There are things that are unknowable as a child, a need to fill in those blanks, and because of this, Farris argues, “legends are often frightening and inconclusive, [and] legends allow children and adolescents to question and explore as they begin to construct their own worldviews.” Many of those views can be found, shaped, or rejected at slumber parties; they are, Farris notes “not just flippant social engagements.” And although they “have not received an abundance of academic attention,” she continues, slumber parties are places that continually advance folklore in the form of “songs, games, and jokes,” but also “pranks, dares, and experiments with the occult.” So while it may seem that these games with names like “The Chills” and “Cat Scratch” are just pastimes for a group of kids up way past their bedtimes, they are, in their own way, a part of carrying folklore to the next generation.

Experimenting With the Occult: The Role of Liminality in Slumber Party Rituals
By: Anelise Farris
Preternature: Critical and Historical Studies on the Preternatural, Vol. 6, No. 1 (2017), pp. 154-179
Penn State University Press
Folk Illusions: An Unrecognized Genre of Folklore
By: Barker K. Brandon and Claiborne Rice
The Journal of American Folklore, Vol. 125, No. 498 (Fall 2012), pp. 444-473
University of Illinois Press on behalf of American Folklore Society