Need to clean your sixteenth-century distemper painting? Try a piece of bread (at your own risk). 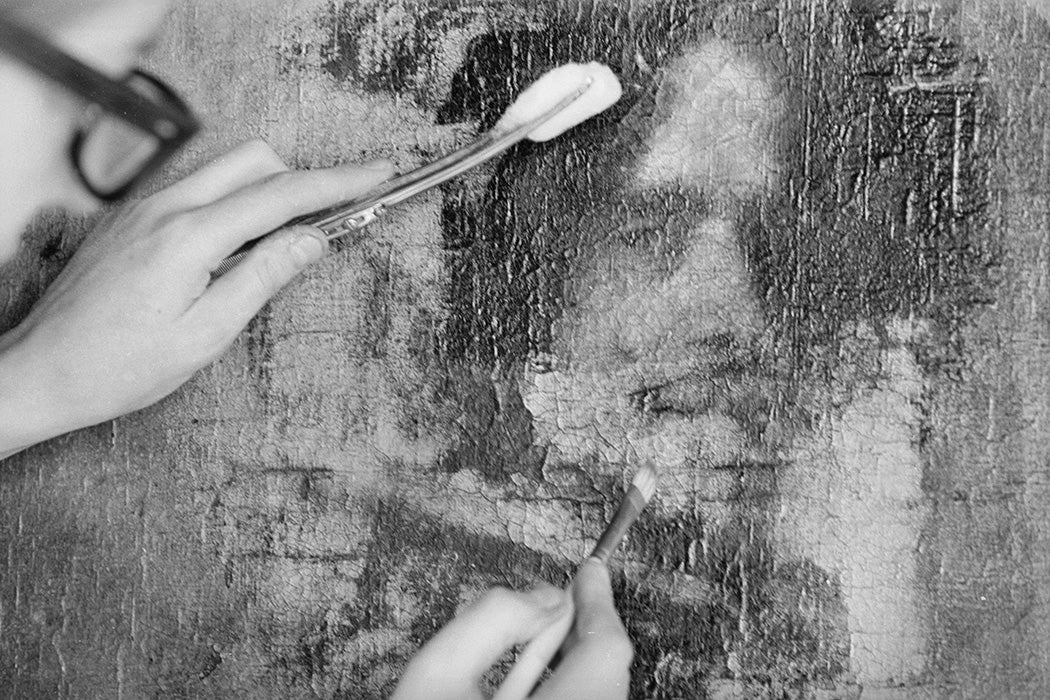 One simple trick, according to the internet, is that you can clean practically anything with bread. This, like all hyped miracle cures, should be taken with a very large grain of salt… and maybe some milk, mustard, saliva, egg yolks, ashes, vitriol, and a host of other ingredients proposed for cleaning painting over the centuries.

Art restoration isn’t, after all, an invention of the twentieth century. Scholar Ulrike Kern explores Theodore de Mayerne’s seventeenth-century documentation of the art and craft of caring for paintings and works on paper. In 1632, De Mayerne himself recommended, as his own invention (a debatable point), the soft insides of “stale brown bread” to gently remove dirt on distemper paintings. Kern writes that the “method of removing dirt with fresh bread or a kneadable eraser is still used today, since no rubbing is needed to make the uppermost layers of dirt stick to the medium.”

Theodore de Mayerne (1573–1654/55) was a Huguenot physician employed by both King James I and his son Charles I. He also had a keen interest in the materials and techniques of painting. His Pictoria sculptoria tinctoria et quae subalternarum artium spedantia in lingua Latina, Gallica, Italica, Germanica conscripta a Petro Paulo Rubens, Van Dyke, Somers, Greenberry, Janson &., Fol. no. xix, more conveniently known as the De Mayerne Manuscript, was compiled from the 1620s to the 1640s in 170 folios. Today it’s held by the British Library.

For the compilation, De Mayerne consulted half a hundred artists, including Peter Paul Rubens (who painted his portrait) and Anthony van Dyke. All this makes him, writes Kern, “one of the founding figures in the history of [art] conservation.” The manuscript was rediscovered in 1847—another important De Mayerne manuscript was found in 1967—and studied mainly for its “usefulness in reconstructing seventeenth-century painting processes” for more than a century. But the manuscript’s insights into restoration, some of “earliest and most extensive documents” on the topic, have lately received more scholarly attention.

Because De Mayerne was essentially taking notes on everything he heard and tried, his suggestions are “far from unproblematic.”

The first reported attempts to restore painting date to antiquity, but there were few written documents on the subject before the seventeenth century.  There was no such thing as a professional picture restorer before De Mayerne; artists, amateurs, or collectors themselves tried their hand at cleaning and restoring, with varying results. In fact, because De Mayerne was essentially taking notes on everything he heard and tried, his suggestions are “far from unproblematic.” Some—such as the use of strong acids and carpenter’s glue—would definitely not be used today, when the techniques of painting restoration can still spark fierce debate. “We can’t be certain whether all the methods De Mayerne recommended were actually practiced,” notes Kern.

So why was did this court physician have a side gig in art restoration? It’s not known for sure, but the arrival of paintings “as black as ink” from Lombardy “seem to have held particular significance” for him.

In 1627–28, Charles I purchased a major collection of art from the Gonzaga family of Mantua. One particular ship arrived in London with paintings that had blackened during the voyage. De Mayerne thought this was due to a combination of fermenting currants and sublimated quicksilver (mercury) stored in the hold alongside the paintings. The physician’s speculations on why the paintings blackened were “probably not entirely correct,” writes Kern, but his explanation of the cleaning process is still valid.

The oil paintings from the ship were washed with milk, after experiments with “saliva, then saliva mixed with warm milk, and, for the most stubborn blackening, warm aqua vita (spirit of wine).” Kern notes that “mild enzymatic cleaning agents and sometimes even saliva are still being used today.”

Nevertheless, Kern concludes that most of De Mayerne’s techniques would not be applied today. But “the fact that they were written down and partially developed by further experiments marked a considerable advance in the disciple of picture restoration.” De Mayerne’s manuscript is a remarkable record of trial and error, hearsay and practice—the veritable blueprint of a discipline at its birth.