The popular conspiracy theory has intriguing parallels with classic noir by Raymond Chandler and Dashiell Hammett. 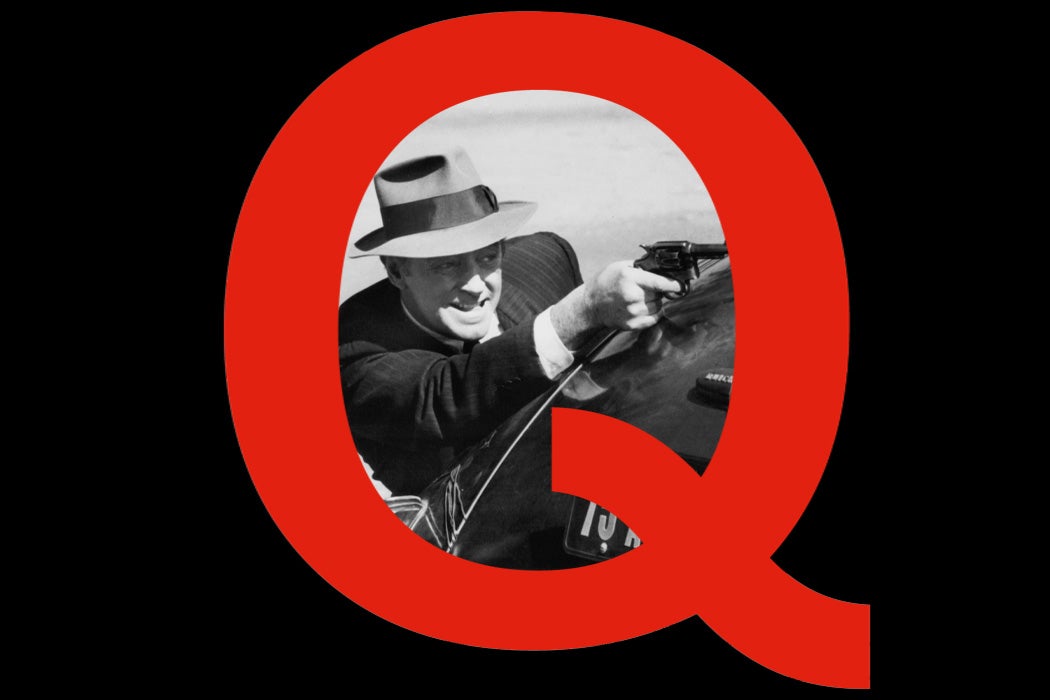 Behind every door lurks a vision of shadowy cabals holding levers of power, a “deep state” undermining elected leaders. Chaos seems just a hat drop away. Into this fearful breach steps one person, entrusted to bring the darkness into the light by a stroke of investigative genius and then, perhaps, violence. But that person makes moral compromises and deals with the devils, which means the ugliness gets to stay in the shadows. If this description of the overarching themes of the detective noir genre sounds familiar, it’s because our current feverish and conspiracy-obsessed age has some striking similarities with some of the best-known crime stories of the twentieth century.

With Donald Trump’s ascension to the presidency in 2016, the combination of money, cynical attempts to play both sides against the middle, and the breakdown of agreed-upon truths gave birth to an overwhelming number of conspiracy theories. The United States has a long history of deeply paranoid thinking—the John Birch Society, doomsday cults, isolationist foreign policies and anti-immigration politics all come to mind—but the last half-decade has given rise to a stunningly widespread and bizarre set of conspiracy theories.

Conspiracy theories are a long-standing American pastime that has always been entwined with popular media—and the noir genre.

Conspiracy theories are a long-standing American pastime that has always been entwined with popular media—and the noir genre. One of the most famous American conspiracy theories revolves around whether the mafia had a hand in killing President John F. Kennedy in Dallas in 1963, a theory that got the neo-noir treatment in James Ellroy’s novel American Tabloid.

But as sociology professor Ted Goertzel learned in 1994, believing conspiracy theories against all rational evidence doesn’t just happen in books. Goertzel conducted a survey of 348 New Jerseyians in 1992 and learned that a lot of those surveyed believed in at least a few conspiracy theories: like, for instance, that Anita Hill was part of a conspiracy to smear Supreme Court Justice Clarence Thomas. Goertzel also learned there was a significant correlation between people who did believed in conspiracies and people who held a low opinion of the current world, or “anomie.” And in a world besieged by climate change, weaponized social media, and a devastation viral pandemic, there is a lot of anomie to go around.

During the Trump presidency, the popular QAnon theory promised violent retribution and course-correction. QAnon is based on a fairly simple premise—a person calling themself “Q” had secret information from inside the Trump administration—that became more and more complicated as QAnon adherents pieced together wilder and wilder theories about how the world was actually run by a cabal of Satanist pedophiles. In their vision, Donald Trump was recruited by the Army to stop those pedophiles from eating children. As time went on, QAnon helped propel the falsehood that the 2020 election was “stolen,” with at least some of its adherents believing they would be able to execute the leaders of the pedophile ring in public on January 6.

The main reasons for the theory’s popularity include a lack of trust in institutions, economic upheaval, anger at seemingly untouchable companies, politicians, and billionaires—in a word, anomie. These themes provide fuel for the boiling fire of rage in America’s electoral politics. And they are all found in the fearful, unequal, and violent settings of noir genre staples like Dashiell Hammett’s Red Harvest or Raymond Chandler’s The Long Goodbye.

According to the historian Richard Hofstadter, author of “The Paranoid Style in American Politics,” violence has always been a given in the American experience. As Hofstatdter wrote in The Baffler: “Most of our violence has taken the form of action by one group of citizens against another group, rather than by citizens against the state.” He further notes that most American violence has been initiated with a “conservative” bias, in order to protect a social order.

Noir is no different. Generally a wealthy person hires the detective and starts the narrative—to right a wrong, to find a missing person, or to help cover something deviant up. But those people are the ones that the single man with a gun finds behind the curtain, keeping the status quo in check. While QAnon’s detective was the president of the United States and their enemies were other Americans involved in organizations like Black Lives Matter or progressive Democratic leaders like Alexandria Ocasio-Cortez, they did something very noir on January 6.

The insurrection at the Capitol building was supposed to be comparable to the unmasking that comes at the climax of the noir novel: a bold apprehension of the villain. The lack of trust in institutions (and the abundance of trust in violence) contributed to the popularity of QAnon. Many people showed up at the Capitol in the first place because of the promise of violence—to right the wrongs that had allegedly had been done to them and to children.

These actions were the result of a sustained, false campaign by conservative leaders and media figures claiming that there was corruption in the electoral system. The hope was that violence could save the believers, the way a noir detective uses a bullet to “solve” the Gordian knot of other people.

The labor historian Jacob Zumoff saw that knot, and how it turned out to be the central topic of Red Harvest and other novels. He argues that “violence—and violent people—are Hammett’s real subject.”

Red Harvest appeared in film via Akira Kurosawa’s Yojimbo, which also draws on Hammett’s The Glass Key, though the movie is less well-known than, say, L.A. Confidential or Chinatown. At the time he was writing Red Harvest, Hammett worked as a Pinkerton, a private detective hired to infiltrate unions. The novel tells the tale of a gumshoe working in Personville, a stand-in for the 1920s labor-war riven Butte, Montana. It is a definitive example of the genre. Personville—Poisonville, as it’s colloquially known in Red Harvest—has cynicism, violence, and inequality to spare, in much the same style that later Los Angeles noirs would use. Hammett’s vision has one man capable of setting things right through violence—and violently pits Americans against each other while wealthy capitalists sit back and watch.

Andrew Pepper, a Queen’s University, Belfast professor specializing in crime fiction, explores how the labor politics at work in Red Harvest dovetailed neatly with the bleak realities of capitalism in the 1920s. That confluence of historical events led to Hammett writing about how those in power will do anything to avoid splitting their wealth with others, through hook or by crook. Pepper writes:

Red Harvest depicts the shift from the rawer, more barbaric forms of capitalist production characteristic of the robber baron or Gilded Age era of the late nineteenth century to the consolidation of monopoly capitalism in the US.

Capitalism’s transformation into a velvet-gloved iron fist in noir novels like Red Harvest is part and parcel of why there is so much distrust and fear in the genre. It’s also why, in 2020 and 2021, many economically unstable people dealing with capitalism’s monopoly-driven velvet-gloved iron fist gravitated toward conspiracy theories: they promise violent justice against untouchable and unseen forces.

The fear and revulsion for the ultra-wealthy is a major feature of the modern political landscape, but so is the almost servile praise saved for the billionaires who “earned their money.” As the scholar Joseph C. Porter pointed out, in the Chandler novel The Long Goodbye, much of the wealth and power that private detective Philip Marlowe deals with is handed down generationally. The message in noir is that wealth and power of this sort corrupts absolutely. “[Money has] a life of its own, even a conscience of its own. The power of money becomes very difficult to control,” self-made man Harlan Potter tells Marlowe.

The distribution of wealth in noirs, or rather the lack thereof, mirrors the modern age. The power of—and the violent threat to—organized labor’s ability to overturn the social order are cornerstones of Red Harvest’s thematic material. The fictional pro-capital and anti-labor violence in Red Harvest and the real labor agitations that shook the normalcy of the early twentieth century hit closer to home when placed next to the labor-unfriendly policies of the twenty-first century, which lead to economic instability and feelings of anomie.

Physical violence isn’t openly promised or sought by large companies now. The current Amazon campaign to break the attempted unionization at its warehouses in Alabama has a lot of discomfiting parallels with the spying on union organizers by hired Pinkerton operatives. Amazon’s surveillance policies use frighteningly modern technology to learn what its workers are thinking and doing. But the conspiratorial thinking that drove capitalists to enlist technology or famous Pinkertons and noir icons like Charlie Siringo and Dashiell Hammett is analogous to the conspiratorial thinking QAnon brought to millions of Americans. They have in common an obsession with information left out of view.

While there might be a lack of pints of rye, dames, fedoras, and chauffeured Packards in current American life, the dark heart of our paranoid past—and gilded corruption—is still beating in a gleaming cage for all to see.

The Right Side of the 1960s: The Origins of the John Birch Society in the Pacific Northwest
By: Eckard V. Toy, Jr.
Oregon Historical Quarterly, Vol. 105, No. 2 (Summer, 2004), pp. 260-283
Oregon Historical Society
The Group Psychology of Mass Madness: Jonestown
By: Richard Barrett Ulman and D. Wilfred Abse
Political Psychology, Vol. 4, No. 4 (Dec., 1983), pp. 637-661
International Society of Political Psychology
Varieties of Post-Cold War American Isolationism
By: John Dumbrell
Government and Opposition, Vol. 34, No. 1 (WINTER 1999), pp. 24-43
Cambridge University Press
The English Background of American Isolationism in the Eighteenth Century
By: Felix Gilbert
The William and Mary Quarterly, Vol. 1, No. 2 (Apr., 1944), pp. 138-160
Omohundro Institute of Early American History and Culture
Troubled by Newcomers: Anti-Immigrant Attitudes and Action during Two Eras of Mass Immigration to the United States
By: Charles Jaret
Journal of American Ethnic History, Vol. 18, No. 3, The Classical and Contemporary Mass Migration Periods: Similarities and Differences (Spring, 1999), pp. 9-39
University of Illinois Press on behalf of the Immigration & Ethnic History Society
Reflections on Violence in the United States
By: Richard Hofstadter
The Baffler, No. 28 (2015), pp. 187-215
"Hegemony Protected by the Armour of Coercion": Dashiell Hammett's Red Harvest and the State
By: ANDREW PEPPER
Journal of American Studies, Vol. 44, No. 2 (May 2010), pp. 333-349
Cambridge University Press on behalf of the British Association for American Studies
The End of the Trail: The American West of Dashiell Hammett and Raymond Chandler
By: Joseph C. Porter
Western Historical Quarterly, Vol. 6, No. 4 (Oct., 1975), pp. 411-424
Oxford University Press
Politics and the 1920s Writings of Dashiell Hammett
By: J. A. Zumoff
American Studies, Vol. 52, No. 1 (2012), pp. 77-98
Mid-America American Studies Association
Privacy and Surveillance Post-9/11
By: Hina Shamsi and Alex Abdo
Human Rights, Vol. 38, No. 1, TEN YEARS AFTER 9/11 (Winter 2011), pp. 5-9, 17
American Bar Association
"Them's Fighting Words": Violence, Masculinity, and the Texas Cowboy in the Late Nineteenth Century
By: Jacqueline M. Moore
The Journal of the Gilded Age and Progressive Era, Vol. 13, No. 1 (January 2014), pp. 28-55
Society for Historians of the Gilded Age & Progressive Era