Putting Words in Your Mouth: The Whimsical Language of Food

Many whimsically named regional foods focus instead on telling a story that often sounds neither delicious nor sophisticated. How do such odd names stick? 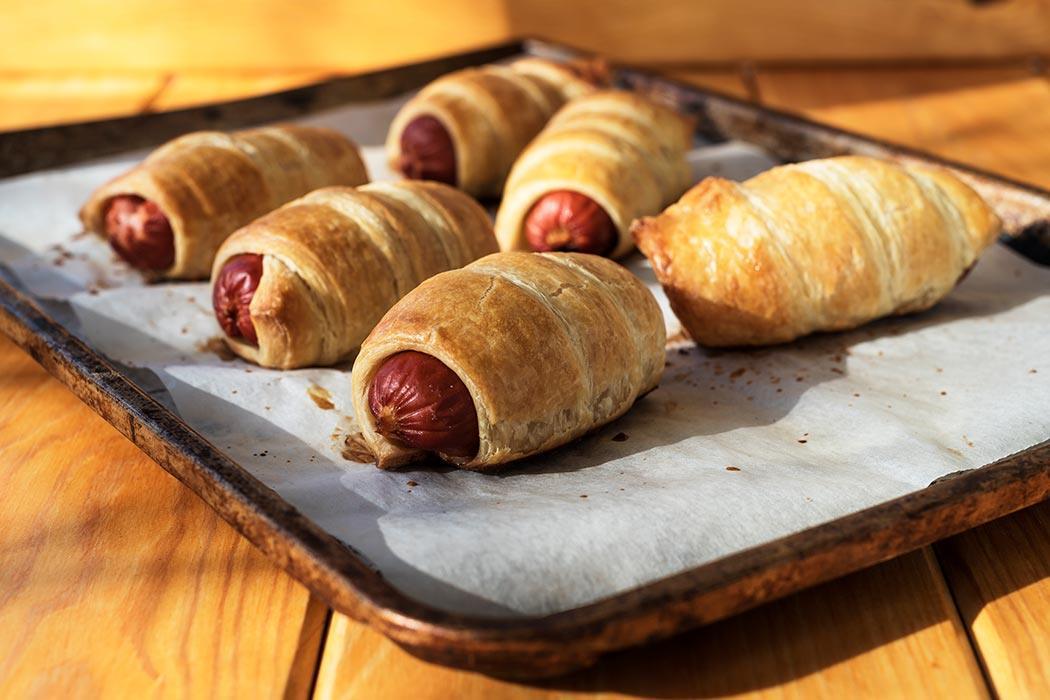 If you’re a fan of hot dogs wrapped in dough (or sometimes bacon), rejoice! Because apparently April 24th is National Pig in a Blanket Day. “Pig in a blanket” is, as most people know, a humble dish enjoyed throughout the world in its many regional guises (in the German version ‘Würstchen I’m Schlafrock,‘ the sausage trades its blanket for a practical dressing gown, possibly while wearing socks and sandals). Of course, if you aren’t familiar with the dish, you might wonder why anyone would bother celebrating such a thing, considering its amusing yet rather unappetizing name.

While not quite as off-putting as “faire Garbage,” a dish that was once innocently enjoyed by medieval offal-fanciers before the word became synonymous with rubbish, the term “pig in a blanket” is bit of a puzzle. It gives us a mere figurative suggestion of what the dish could be like, but unless we’re in the cultural know, it would be difficult to figure out what it is, much less celebrate it.

“Pig in a blanket” joins an odd class of other whimsically named (and often much beloved) traditional dishes that seem to have little relation to their ingredients. Instead, they wear the traces of their playful and evocative etymological histories on their sleeves. Nobody blinks at “hot dog,” a kind of disgusting term for such a popular food, but supposedly the slang name originated with 19th century college jokes about sausages containing dog meat. Linguists are still debating hot dog’s actual history, which just goes to show how attached some people can get to food terminology. Consider these other colorful food names:

Toad in the hole (sausages baked in a batter),
Ants on a log (raisins on peanut butter on a celery stick),
Devil/Angel on horseback (dates or oysters wrapped in bacon),
Bubble and Squeak (fried potato and cabbage),
Spotted Dick (sometimes known as spotted Richard in polite circles, a kind of pudding with raisins and custard),
Hush puppies (deep fried cornbread balls),
Love in disguise (a Welsh dish of stuffed and boiled heart).

Though there are those who might be inclined to blame the Brits and their infamous cuisine for some of these, food names that sound inventively unappetizing are not limited to English.

To celebrate a dish is to appreciate the social, cultural, and linguistic elements that come with it. Food may be a necessary fuel for human survival, but that’s clearly not all it is. We don’t just consume food silently. We talk about it until it infuses our speech with food-related metaphor in strange new ways. What’s the beef with that?

Human beings feed on metaphors as ways of talking about something else: we hunger for, cannibalize, spice it up, sugar coat, hash things out, sink our teeth into, and find something difficult to swallow or hard to digest so we cough it up and then have a bone to pick with someone, which is their just desserts.

So Michael Owen Jones notes in The Journal of American Folklore. It turns out that food is a complex symbolic language in itself that can be just as culturally complicated to navigate as a foreign language. The cuisines we prefer can be markers of not just ethnicity, but also class, age, gender, and other aspects of identity. We know that food can be symbolic and meaningful when it comes to observing holidays, but Jones points out that even an ordinary meal or basic ingredients can cause inadvertent offense or misunderstandings. One person’s high prestige food may be considered low class by another:

For example, in 1972-73 the American Food for Peace Program sent yellow corn from the United States to Botswana for distribution in schools as drought relief. Shamed and humiliated by the tons of yellow grain given them as food, secondary school students in Serowe rioted, burning the headmaster’s car and destroying stockpiles of it. Only white maize is fit for human consumption; yellow is fed to animals.

So even the names we give to some regional or traditional foods can be an important way to engage in cultural communication and validate personal identity. Those who know and love certain foods by their most peculiar names are unwitting participants in a secret code and club that can reveal a lot about who they are and where they come from.

It turns out that food is a complex symbolic language in itself that can be just as culturally complicated to navigate as a foreign language.

Regardless, these peculiar food monikers seem odd in a gourmet-obsessed age where the naming of food and the language used around food has come to be seen as serious business. Studies in sound symbolism and branding have shown how the very vowels used in a product name can persuade us that a particular item is larger or smaller, fatter or thinner, heavier or lighter for example. Dan Jurafsky’s book Language and Food describes how participants of a study comparing the hypothetical ice cream names “Frish” or “Frosh” rated “Frosh” smoother, creamier, and richer than “Frish.” Even though the words only differ in a single vowel sound—whether they have a back vowel (as in words like “frosh” or “large”) or front vowel (as in “frish” or “thin”)—this has an effect on how we might view a product. Get the name right and it can certainly have an impact on how much you can sell.

The way food is described tends to use a kind of culinary linguistics specifically designed to make dishes sound more delicious, high quality, and intriguing. Linguists Ann D. Zwicky and Arnold M. Zwicky explored the rhetorically tasty register of the American menu and found that the kind of language used to describe food can be as important as the actual dishes themselves.

The way food is described tends to use a kind of culinary linguistics specifically designed to make dishes sound more delicious, high quality and intriguing.

While menus need to convey the right kind of information about a dish as concisely as possible, much like a news headline, this brevity is often flouted by surreptitious and persuasive advertising elements to entice customers. “Sautéed shrimp in garlic butter” is a good basic description, while “zesty garlic butter” might make a dish seem more delicious. “Tasty” adjectives such as “fresh” or “hot” can go a long way in persuading a customer to try something, while words that actually refer to taste, such as “bitter,” “salty” or “sour” are rarely used. Fanciful participles such as “married,” “kissed,” “accented,”and “hand-crafted” can often be part of a menu’s persuasive arsenal, suggesting high quality cooking or ingredients without really saying anything substantive about the dish.

Of course the language of haute cuisine in American English menus is decidedly French. Zwicky and Zwicky found that while English was fine for plain-spoken menus, restaurants that wanted to convey an air of foodie sophistication might translate their entire menus into French, even if the cuisine was something else, like Italian. Whether the French use was appropriate or grammatical for a restaurant’s clientele was immaterial and sometimes French words would be used by default without translation, such as the Italian “lumache” into French “escargots.” Even the mere appearance of “le” (considered by most Americans as the default French article) is apparently enough to imbue a menu with a seemingly high class air, such as “le crabmeat cocktail.” When French words aren’t available, French word order might even be used, such as Gourmet magazine’s curious custom of using the inverted French naming pattern for recipes, such as “Vegetable Melange Posvolsky” (a recipe submitted by reader Miriam Podiameni Posvolsky) and “Chicken Breasts with Port Sauce The Greenhouse” (a recipe by The Greenhouse restaurant).

Many whimsically named regional foods focus instead on telling a story that often sounds neither delicious nor sophisticated.

So in le monde de la cuisine Americaine, anything translated into French (or barring that, vaguely European) is automatically sophisticated and excitingly mysterious. The names don’t even have to be explained. This means that if you come across an intriguingly fancy French dessert such as “pets de nonne,” don’t worry, it doesn’t mean anything like “nun’s farts.“ As for the Italian pasta “strozzapreti,” take and eat, no priests were strangled during the making of it. Probably.

Considering the importance of culinary linguistics in making food sound tasty or elegant, it’s interesting that so many whimsically named regional foods focus instead on telling a story that often sounds neither delicious nor sophisticated. How do such odd names stick around in our food lexicon? Strangely named foods are really doing the same thing as mystery French indiscriminately applied to menus. It’s all a kind of language play, but with a different symbolic function. French described dishes are evocative of high quality cuisine, reflective of social class. Meanwhile names that are silly, fun, lower class or even disgusting are ultimately very memorable, and can evoke a childlike comfort in food. These more humble regional dishes can inspire a longstanding affection and nostalgia—all good motivations for celebrating a traditional food. 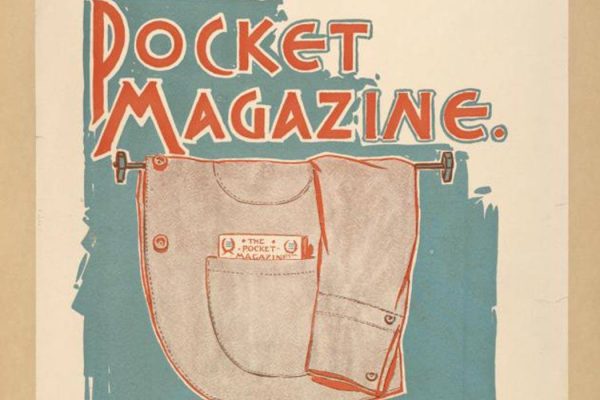 Put This Poem in Your Pocket

The Academy of American Poets has declared it Poem in Your Pocket Day. We’re not complaining; we’re suggesting you ...