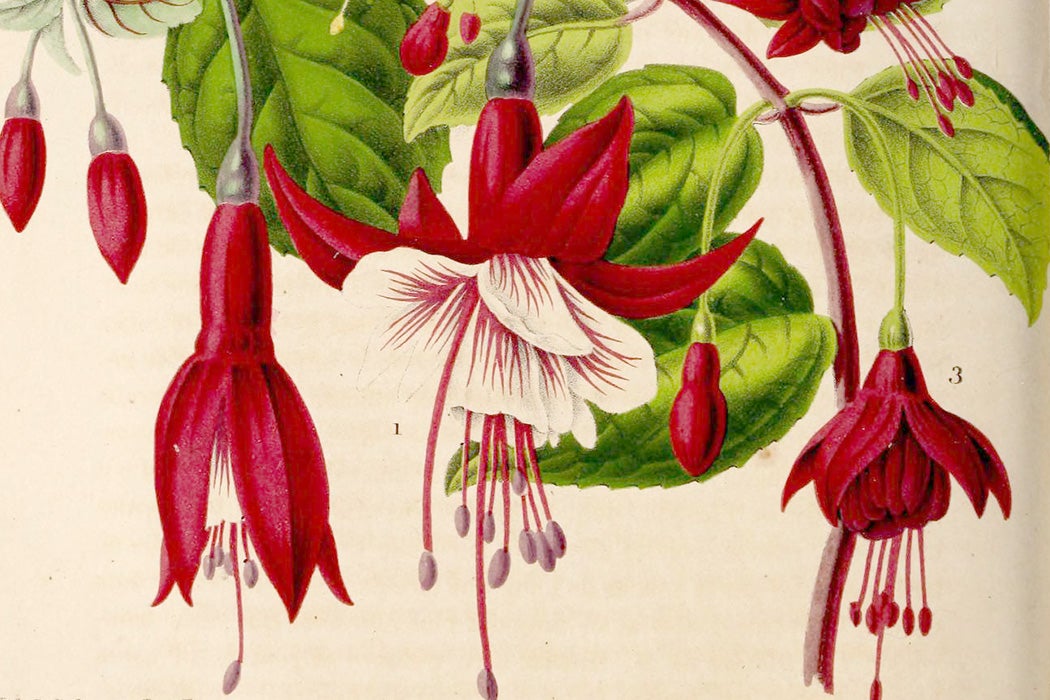 Is it possible for a plant to suffer from overexposure? Not to the elements, nor to anthropogenic pollutants, but through overbreeding and too much publicity? In the case of Fuchsia, a genus of floriferous shrubs and small trees, the answer is a resounding yes. A cultural history of fuchsias focusing on their heyday in France and Europe, which lasted from the 1850s to the 1880s, offers a cautionary tale about the whims of fashion in the realms of horticulture, art, and commerce.

The French friar and botanist Charles Plumier was the first European to record encountering a fuchsia, in the late 1690s. He did so during a colonial bioprospecting expedition to the West Indies made at the behest of Louis XIV of France. Following custom, Plumier named the “new” species in honor of an accomplished European predecessor: the sixteenth-century German herbalist Leonhard Fuchs. Plumier’s identification and description of the plant along with an engraved illustration were published in Nova plantarum americanarum genera, in 1703. Such images showing a plant’s flower and fruit primarily aided identification.

In the late 1780s, the first fuchsia entered cultivation in Europe; however, specimens were not introduced in great numbers until the 1820s. Many early imports were collected from Meso- and South America, though fuchsias are also native to the Greater Antilles, New Zealand, and islands in the South Pacific. By the 1840s, the plant was cultivated by breeders in England, France, Belgium, and Germany. They used a modern medium—lithography—to publicize their stock.

Efficient and cost effective, lithography enabled one to pull a seemingly endless number of prints from a single inked stone.

Lithography was a favored print-making technique for advertising exotics and communicating and distributing botanical knowledge. Efficient and cost effective, lithography enabled one to pull a seemingly endless number of prints from a single inked stone. The process of using a unique original to produce a nearly infinite quantity of commercial copies finds an analogy in modern horticulture. Breeders used specimens to develop limitless hybrids and cultivars with flowers of varying shapes, colors, and markings.

The botanical series Flore universelle exemplifies how lithography was enlisted to disseminate information about fuchsias and other plants sold in mid-nineteenth-century Paris. This publication was created by the French naturalist and mycologist Jean-Baptiste Louis Letellier. Remarkably, Letellier designed and likely printed all of its 500 lithographs, distributing them via monthly subscription.  Flore universelle contains several hand-colored lithographs that portray fuchsias. They show early introductions to France—Fuchsia coccinea, Fuchsia microphylla, Fuchsia corymbiflora, and Fuchsia magellanica. While the prints mainly convey botanical information, these images and text also provide insights about a sudden explosion of commercial and cultural interest in fuchsias. The portrait of Fuchsia globosa (a synonym for F. magellanica), for example, vividly evokes this plant’s aesthetic appeal. Its blooming pendent flowers with bright red sepals, rich purple petals, and tassel-like pistils and stamens were the stuff of dreams for enterprising breeders.

In the 1850s, illustrated horticultural journals set the fashion for each season’s newest, rarest, and most coveted ornamentals. This chromolithograph from a Belgian journal shows three newly bred fuchsias. The largest and most opulent bloom, in the image’s bottom center, advertises a double-flowered variety with purplish-red sepals and white petals marked with red veining. The print’s intense yellow-green, emerald, purplish-red, and mauve hues evidenced the chromatic allure of fuchsias in life and art, sparking demand for these plants and their imagery.

Still more fuchsias flowered in modern public parks and gardens, especially in Paris. The French capital’s green spaces were created or revitalized during a massive urban renewal project between 1853 and 1870. Spectacular ornamental plantings were curated by the French horticulturalist Jean-Pierre Barillet-Deschamps, who worked under the engineer and landscape designer Jean-Charles Adolphe Alphand. Of course, Barillet-Deschamps chose several types of fuchsias for planting along promenades and displaying in containers.

By the mid-1860s, the fuchsia’s overbreeding and excessive publicity threatened to erode its popularity. The mid-nineteenth-century Silesian gardener and author Oskar Teichert observed as much. Teichert’s history of the fuchsia suggests that an overwhelming number of hybrids were introduced in catalogs each year. This surplus prompted Teichert to predict: “in all likelihood, the Fuchsia will fall out of fashion like the Wallflower or Aster.” That pronouncement about the plant’s future is echoed by the present-day historian of nineteenth-century French art Laura Anne Kalba: “The popularity of flowers ebbed and flowed according to consumers’ tastes, which nurserymen and florists attempted simultaneously to serve and manipulate with varying degrees of success.”

Nevertheless, the vogue for fuchsias continued into the 1870s. For that reason, the flower was an ideal muse of the French artist and gardener Claude Monet. In his painting Camille at the Window, Argenteuil, Monet portrays his wife standing at a threshold, framed by artfully arranged potted fuchsias. His Impressionist painting technique engages with and materially manifests the flower’s appeal. Strokes of red and white pigment evoke lantern-shaped blossoms, which form a botanical tapestry with dashes of silvery-green or cool-lavender. The modishly painted fuchsias also explore the aesthetic pleasure of human-plant interactions.

At some point, though, the fashion for fuchsias waned. New types of plants, like architectural palms and delicate orchids, eclipsed it by the turn of the century. Too much breeding, publicity, and popularity contributed to fuchsias being consigned to the past, by twentieth- and twenty-first century standards. Today, fuchsias are also overshadowed by the eponymously named red-purple color, which in 1860 was named fuchsine, partly after the flower. The Plant Humanities Initiative takes an interdisciplinary perspective on examining the historical significance of plants and their cultural entanglements with horticulture, art, and commerce. 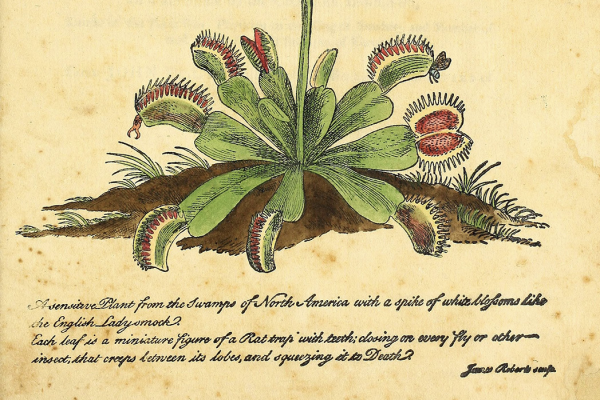