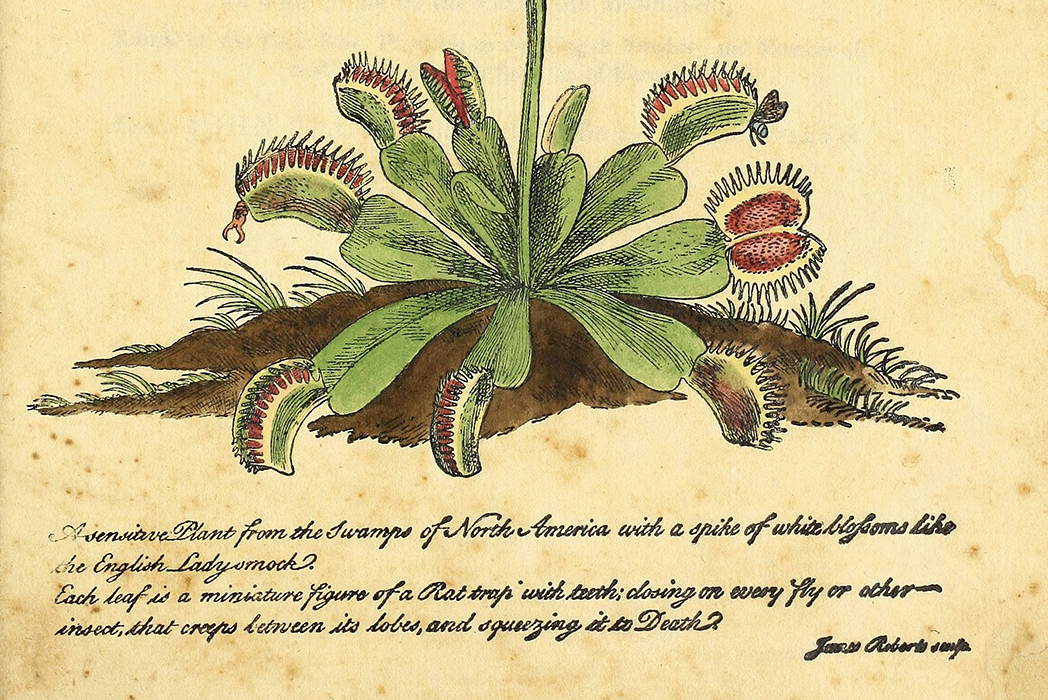 The Venus flytrap, Dionaea muscipula, is one of the most enthralling plants in the world. The insectivorous species is well known for its hair-trigger leaves, which evolved to capture and digest prey. These adaptations allow the plant to ingest nutrients that are scarce in the poor soil of its native habitat, the swamps and bogs of the Carolinas. Although designed to capture insects, spiders, and other small creatures, the plant’s snap-trap leaves have captivated imaginations since the Venus flytrap’s first recorded collection by European colonizers, in 1759.

As scientific knowledge about the plant increased in the ensuing years, so did cultural excitement about its meat-eating and predatory behaviors. These traits—expected of carnivorous animals, not organisms belonging to the vegetal kingdom—inspired the work of late nineteenth-century scientists, artists, and fiction writers. As scholar of British literature and culture Elizabeth Chang explains, “the idea that a plant could pursue an appetite at all defied distinctions between forms of organic life.” Needless to say, the Venus flytrap’s perceived transgression of the taxonomic boundaries separating plants from animals still fascinates humans.

Visual representations of this botanical curiosity also feed our appetite for beauty, horror, and fantasy. James Roberts’s hand-colored engraving of the Venus flytrap, after a design by an unidentified artist, provides a viscerally evocative vision of the plant, manifesting its attractive and repulsive qualities. Because the illustration was made to accompany the first published botanical description of the species, it also provides information about the plant’s unique morphology. The upper half of the picture depicts a cluster of white five-petal flowers—some mere buds, others full blooms—elegantly perched atop a slender stem, where pollinators can feed without being eaten. The allure of the dainty blossoms is incongruous with the lower portion of the plant, which sits low in the soil. Its rosette of fleshy acid-green leaves with lobes, possessing blood-red interiors, serves to attract, entrap, kill, and digest prey. In the lower left corner of the image, an earwig dangles from a clamped leaf and, diagonally across from it, a fly protrudes from another. Prior to publications like this one, the Venus flytrap and its carnivory were unknown in Europe, though they quickly kindled the desire of naturalists, botanists, and plant collectors to obtain their own specimens.

Roberts’s engraving of the Venus flytrap and the first scientific description of the plant were published in John Ellis’s Directions for Bringing over Seeds and Plants, from 1770. Ellis, who was a British naturalist and merchant, wrote that description shortly after William Young introduced the species to England from its native region. Its official botanical name—Dionaea muscipula—is also credited to Ellis. The binomial, which derives from the ancient Greek name of the goddess Dione, mother of Aphrodite, and the Latin compound for mousetrap, references the plant’s alluring flowers and deadly snap-trap leaves, respectively.

The plants’ dominion over its eerie terrain unsettles longstanding European notions of human mastery over nature.

Yet the dual nature of these morphological features also resonated with cultural attitudes about women and female sexuality then circulating in society. As the scholar of American literature Thomas Hallock explains, “Its touch-sensitive, flesh-colored leaves drew predictable analogies to predatory female sexuality, and the difficulty of transplanting a Dionaea further intensified the longing to possess one.” Indeed, the botanists John Bartram and Peter Collinson and other male flytrap enthusiasts made such analogies when they used the word “tipitiwitchet,” a euphemism for female genitalia, to describe the plant in letters to one another.

While Ellis was consumed with the idea of importing the Venus flytrap to England and cultivating it there, this print, entitled American Bog Plants, invited viewers to use their imaginations to travel vicariously to the Carolinas to encounter the exotic plant in its native habitat. The picture, from Robert Thornton’s book The Temple of Flora, portrays a bog in which an assortment of plants flourish. Yellow skunk cabbages (Symplocarpus foetidus) with mottled purple markings, shown in the lower left corner of the image, invite one to imagine them emitting a putrid odor known to attract carrion-feeding pollinators. Towering over the skunk cabbages are blooming insectivores—a yellow-green pitcher plant (Sarracenia flava) with a five-petal flower and tubular lidded leaves, and a Venus flytrap. Their mechanisms for luring and consuming prey are nowhere emphasized in the illustration, from which such creepy-crawlies and critters are omitted. What is captivating about these carnivores are their biomorphic forms and imposing stature within a landscape that is vaguely described in color gradients of soft blues and browns. The plants’ dominion over this eerie terrain unsettles longstanding European notions of human mastery over nature, inviting fantasies about alternative realms in which flora rule.

Although the plant portraits contained in Thornton’s Temple of Flora are outliers in the history of botanical illustration due to their theatrical plants and otherworldly settings, the above image of insectivores and their prey is more typical of pictures circulated in Euro-American newspapers and journals during the 1870s. Such prints provide visual inventories of the many carnivorous species that were then at the peak of their popularity.

A similar picture accompanied the 1875 Scientific American article “The Animalism of Plants.” Its discussion of carnivory in the vegetal kingdom points to continuing excitement about the Venus flytrap. The report also features excerpts from a speech given by the prominent British botanist Joseph Dalton Hooker in which he describes key experiments conducted on the plant: “By feeding the leaves with small pieces of beef, [William Canby] found, however, that these were completely dissolved and absorbed; the leaf opening again with a dry surface, and ready for another meal, though with an appetite somewhat jaded.” According to Hooker, that research on the Venus flytrap’s adaptations to trap prey and derive nutrients from it demonstrated its close relationship to animals. Like Hooker, the English naturalist Charles Darwin and the American botanist and entomologist Mary Treat were equally enamored with Dionaea muscipula and its relative, the sundew, publishing important studies on them.

Today, the Venus flytrap still enthralls people with its brightly hued touch-sensitive leaves. Although it evolved that mechanism to supplement its diet and compete in the wild, this evolutionary trait also places the plant at risk by increasing commercial demand for specimens. Poaching has led to a decline in Venus flytrap populations, though habitat loss poses an even greater threat to their survival. The Plant Humanities Initiative takes an interdisciplinary perspective on exploring these and other phytocentric topics.